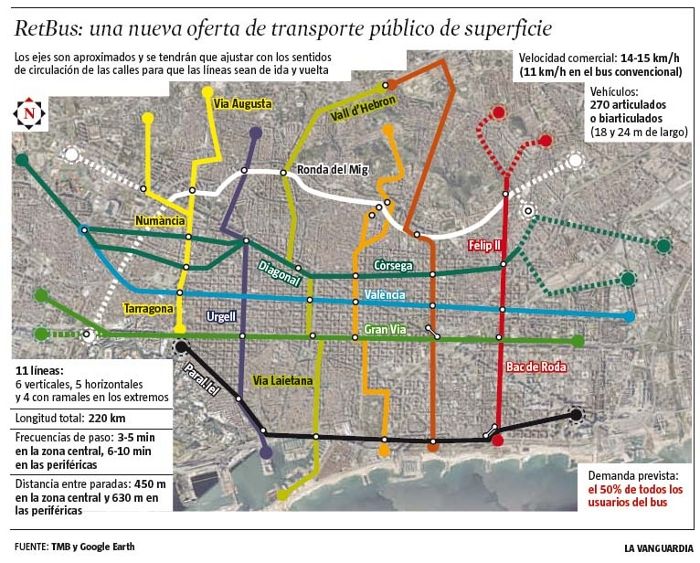 Spain and its second city, Barcelona, had been known for massive (and massively efficient) public works construction projects: Metros, trams, high-speed rail tunnels, highway tunnels, railway stations and parks. All that came to a halt when the country plunged into a severe economic depression and its government slashed budgets under austerity plans. But that doesn’t mean the Catalan capital won’t get any more transit. Last November, the city unveiled the second phase of its bus reorganization plan, remaking the system through new bus rapid transit lines, called the Orthogonal Bus Network.

A number of vertical, horizontal and diagonal lines were cut through the city, reflecting not its pre-war tramways — the basis for nearly all buses in the Western world — but newer realities of urban travel. The lines are straighter than the old ones, reflecting a core tenet of good transit. The new network will consist of 28 lines in total (17 vertical lines, eight horizontal and three diagonal), but they’ll be much of higher quality than those they replace. (It will move two-thirds of the old, conventional network’s passengers with just a bit over 30 percent of the number of vehicles.) Headways drop from an average of 12.3 minutes to between five and eight minutes, and buses now have their own lanes and priority at stoplights. Overall, commercial speeds are expected to rise 28 percent.

“With the new network,” writes the city, “approximately 30,000 Barcelonans will have a bus stop within 300 meters of their home, and nearly half of the population will be able to travel to any point within in the city in less than 40 minutes.”

Port of Melbourne for Sale?

The Australian state of Victoria is considering selling off the ports of Melbourne and nearby Hastings, exchanging long-term leases for as much as AU$8 billion (about $7 billion in U.S. dollars). The heavy industry at Melbourne’s port is expected to gradually shift to the suburb of Hastings, as the land in the former becomes too valuable for relatively low-value port operations. Melbourne’s port was estimated in 2010 to be worth between $4.4 billion and $6.6 billion as a port, or up to $10 billion if restrictions on its use were removed, allowing the land to be redeveloped into residential and commercial space.

What to spend the money on is highly contested. Both the ruling center-right coalition and the opposition Labor Party want to spend the proceeds (or at least, a similar sum of money) on transportation, but they differ on what kind. The Napthine government is pushing for a controversial toll road project known as the East-West Link, whereas Labor wants to spend more of the money on rail. Both, coincidentally, come in at around $8 billion. The assumption is that the winners of the state elections in November will get to build their plan.

Britain hasn’t opened a further education (or, to use the American term, continuing education) college in 20 years, but the U.K. Department for Business, Innovation and Skills has announced the creation of a special school to cater to the country’s HS2 high-speed rail project. The first phase will run from London to Birmingham, with completion planned for 2026. The second phase will create two branches to Manchester and Leeds with, hopefully, a final extending the two branches north to Scotland.

“This new elite institution with a specific focus on rail construction and maintenance will give learners new skills which respond not only to the needs of HS2,” the Skills minister said, “but also to the future of rail engineering, so is vital for Britain’s future.” Newly installed HS2 chairman David Higgins suggested that the country had a deficit of engineering talent, saying British railway engineering graduates “tend to go overseas.” (Then again, we hear there are a ton of Spanish engineers on the market.)

SNCF Can’t Escape the Shadow of the Holocaust

You can set your watch to it: Anytime SNCF tries to bring its French rail expertise to America, someone will bring up the Holocaust. As the French national railway, SNCF was required during Vichy France’s cooperation with Nazi Germany to transport Jews and other victims of the Holocaust to concentration camps. This became an issue when SNCF tried to get involved in California’s high-speed rail project (they were rebuffed, but for other reasons), when All Aboard Florida said it wouldn’t rule out using the French company as an operator for its private passenger rail service, and now it’s happening again in Maryland. Keolis, an SNCF subsidiary, is bidding to operate the Purple Line, a light rail line between Montgomery and Prince George’s counties outside D.C., and Holocaust survivors are mobilizing to stop them.

This happened before to Keolis in Maryland when it bid for (but did not win) the right to operate the MARC commuter rail lines. The state then passed a law requiring bidders to lay bare their Holocaust history, which SNCF did by putting 1.3 million documents online. This time around, a group representing those who were transported in SNCF trains and survived the death camps wants reparations, not just transparency. SNCF, meanwhile, says that French law forbids state-owned companies from paying reparations, but that the French government itself — which owned and still owns SNCF — has paid “billions” over the years in reparations for the Vichy regime’s involvement in the Holocaust.

It should be noted that finding links between the Axis powers during World War II and major transportation companies is a trivial exercise. Subsidiaries of Ford and General Motors both built equipment for Hitler’s war machine. Kawasaki, the company behind the Washington Metro’s new 7000 series railcars, built the Ki-61 fighter plane, which many kamikaze pilots crashed into American warships. (Thanks to Erik Griswold for these fun facts.)