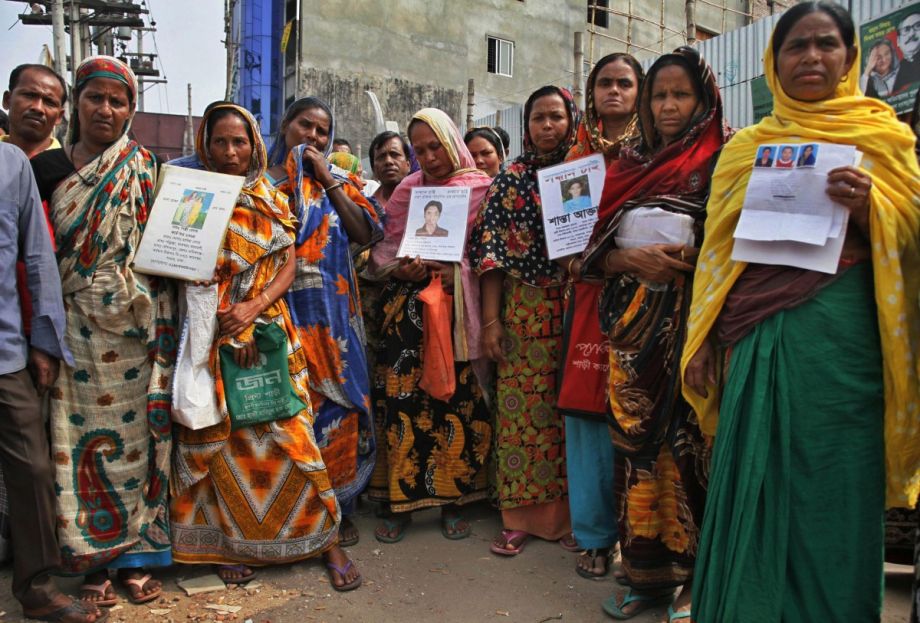 During a protest last year, relatives of victims of the 2013 Rana Plaza factory collapse held photographs of those they lost. (AP Photo/Suvra Kanti Das)

After the collapse, the photos were inescapable. On April 24, 2013, Rana Plaza, a nine-story factory in a suburb of Dhaka, Bangladesh, collapsed with 3,500 workers inside. Families of the missing quickly flooded the area. Over and over, they ringed photojournalists to hold up images of their loved ones, begging for information. They taped fliers on the gates of hospitals and the improvised morgue, announcing bare details in Bengali letters: Information wanted. Nazma Begum. Factory assistant.

Information wasn’t always forthcoming; 1,140 workers died, and Nazma’s body remains unrecovered in the factory ruins today. But putting a human face on labor violations, together with public disclosures of which brands had garments in production in the factory, spurred the creation of powerful inspection processes in Bangladesh that now protect millions.

Two years on, the question is whether informal laborers — the most vulnerable of Bangladesh’s garment workers — are included in those numbers. Although safety inspectors acknowledge difficulties in reaching these workers, the answer seems to be a resounding yes.

Since 2014, both the Accord on Fire and Building Safety in Bangladesh and the Alliance for Bangladesh Worker Safety — consortiums of global clothing brands, labor organizations and the Bangladeshi government — have competed in a race to the top for workers’ well-being. By some measures, they’ve been a huge success. The organizations have identified a combined total of 135,000 safety issues in about 1,700 factories. (As a factory might serve several Western clients and a single building can house several factories, the two groups occasionally duplicate inspections.) Inspectors have evacuated and shuttered over three dozen buildings at risk of imminent collapse. In hundreds of others, they’ve requested major renovations and repairs.

Because no baseline data exists, it is impossible to estimate a drop in accidents or injuries. But the efforts are an obvious boon to occupational health and well-being. Accord representative Joris Oldenziel says, “We feel we can state fairly honestly that we have been able to prevent a lot of factory fires.”

A common concern, however, is about the percentage of factories where protective changes might not have been made. Bangladesh has far more than 1,700 factories. Nationally, the garment sector is a complex mix of multiple-story, thousand-worker buildings, and back-alley informal shops to which the larger facilities subcontract work. “There will be subcontracting every day — you cannot stop it,” a factory owner pseudonymously called Tareq told a journalist from VQR a year ago, referring to the delegation of parts of the clothing production process from one facility to another.

“Officially, the brands will say no more, that they are controlling it,” Tareq said about the practice, which is mostly illegal in Bangladesh. “But unofficially, it will always happen, and they know it.”

These informal subcontract shops — which are less likely to offer adequate safety, give workers formal contracts, or be organized by unions — often need inspections most. “These are really unsafe places for workers,” says Bangladeshi labor organizer Kalpona Akter. “All the abuses are more happening at subcontract factories.”

That said, the Accord and the Alliance all appear to be including formal and informal factories in their inspection efforts.

“Every factory where production takes place for brands that are signatories to the Accord … gets inspected and falls fully under the Accord program,” says Oldenziel. Alliance spokesperson Guillermo Menenses echoes, “Our member agreement mandates that all factories producing for member companies need to be registered with the Alliance.”

Factory owner Tareq’s cynical revelation isn’t entirely off base, however. Oldenziel admits, “It is the responsibility of the brands to submit an accurate list of all the factories that they source from … but obviously we all know there is an issue of unauthorized subcontracting also taking place. In those cases, when we are unaware of a factory producing for an Accord signatory, it’s not on our list and not on our radar.”

But Alke Boessinger, whose organization, UNI Global Union, is closely involved with the Accord, says this doesn’t always end with informal factories falling through the cracks. Rather, some subcontracting has been accidentally discovered during inspections.

“If we are able to indeed confirm that Accord production is taking place,” Oldenziel says, “ … those factories become covered by the Accord as well.”

If some factories end up neglected, though, the inspection effort may still have a positive effect on their workers. Along with installing worker education courses, health and safety committees, and anonymous helplines in the factories they cover, the international actors are also pushing for a sea change in the expectations of Bangladeshi workers, typified by what Oldenziel calls “the right to refuse unsafe work.”

The cultural shift necessary to make worker empowerment a stable change pervades the entire industry, in large part because it involves labor organizing efforts. The European-led Accord specifically promotes these, and even the Alliance — an organization allied with Walmart — “clearly and strongly support[s] the rights of workers to unionize,” according to Menenses.

Akter says activists are seizing the opportunity. They’ve created unions in over 200 Bangladeshi factories to date — and they don’t neglect the smallest workplaces. “We started with the subcontract factories,” she says. “We said, ‘Let us start with the worst.’”

In sum, Bangladesh’s post-Rana Plaza changes are not only a rare example of corporate capitalists moving to help poverty-wage workers. It’s also an occasion when the most marginalized of those workers are being sought out for support. In a country where garment factory jobs have long been regarded as dishonorable work, this is a rare and historic effort.

In fact, it would be nice to have something like it for all of Bangladesh’s factories. On March 11th, a partially constructed cement factory collapsed in Khulna, an area in southern Bangladesh. The collapse triggered comparisons to Rana Plaza, and rescuers are still digging trapped workers out of the wreckage.