Baltimore’s Main Transportation Hub Will Be Upgraded, but Artists Worry About Their Place – Next City

Baltimore’s Main Transportation Hub Will Be Upgraded, but Artists Worry About Their Place 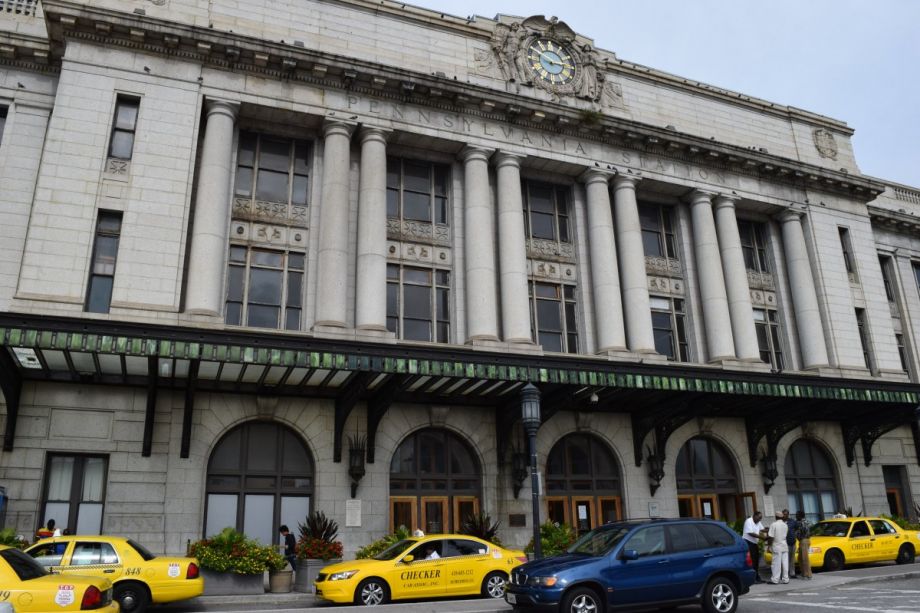 Baltimore’s 109-year-old Beaux Arts-style Pennsylvania Station is undoubtedly one of the crown jewels in the city’s public transportation network. Though the city’s public transit options lag behind its neighbors to the north and south, Penn Station is not onlyAmtrak’s 8th busiest station, it also serves city bus riders, suburban light rail users and riders of MARC, a commuter rail system. In total, the transportation hub serves 3 million passengers per year.

With just a Dunkin’ Donuts, a newsstand and one restaurant, the station is a place riders pass through rather than linger in. A new plan led by Penn Station Partners, led by Beatty Development Group LLC and Cross Street Partners, hopes to change that by adding eight to 10 shops and restaurants, boutique office space on the second floor, better pedestrian access to the station, and one or two apartment buildings on empty parking lots next to the station. Amtrak has also set aside $90 million to upgrade the station with new roof and windows, lighting and other core improvements, which is slated to begin this summer and take two years to complete.

“This is probably the greatest transit-oriented development opportunity that Baltimore has,” Tim Pula, Beatty’s vice president of community development, says of the estimated $500 million project.

The much needed upgrades will undoubtedly enhance the city’s public transportation options at a time when Amtrak ridership is expected to double by 2040. Baltimore is “an important hub” and “a important historic asset,” Amtrak spokeswoman Kimberly Woods says.

But will the plan enhance the surrounding neighborhoods of Greenmount West, Old Goucher, Barclay and Charles North — collectively known as the Station North Arts and Entertainment District — or will it price out edgy, underground artists and performance spaces for which its known? Some of its best known destinations include makerspace Open Works, the Baltimore Rock Opera Society, live music spots like the Metro Gallery and the Crown, Joe Squared pizza, Club Charles bar, Station North Arts Cafe and gallery, and the longstanding Charles Theater.

Over the last decade, universities and nonprofits have made the area a more desirable location for artists and art-seekers, adding affordable artist housing (City Arts I and II) and restoring the 105-year-old Parkway Theatre and the Centre Theatre, which houses the joint film program of Johns Hopkins University and The Maryland Institute College of Art. Though a handful of businesses have vacated the area, it received a boost after Bon Appetit named Le Comptoir du Vin to its Hot 10 List and the January opening of the North Avenue Market, an arcade, music and food spot in the former Red Emma’s space.

Given the new plan for Penn Station and its surrounds, “there is a concern that property prices will rise and artists will be displaced like they have in other areas,” says Central Baltimore Partnership Executive Director Ellen Janes. CBP coordinates with nonprofits, businesses, universities and artists to help revitalize the area.

Janes says her group is working with two property owners to develop at least 50 affordable artist studios by the spring with funding from state and private sources. “We’re intentional about preserving affordability. That’s unlikely to happen unless we make an effort to do that. We hear from artists that they can’t find affordable studios.” The 50 units is just a start, Janes says, and the group will hopefully get more in the future after these residences are completed. CBP is also working on getting a 60,000-square-foot makerspace where artists can produce textiles, metal work and other pieces.

Rising prices are certainly a concern for Aran Keating, executive director of the Baltimore Rock Opera Society, who worries that artists and operators of underground performance spaces will be forced out. “I’d love to see any of these developers commit to using part of their budget to uplift existing community organizations and artists who have made Station North one of the most exciting arts places in the city.” Keating says his group is now working on a 20-year-lease with an undisclosed landlord to ensure its future in the neighborhood and avoid being displaced again. It was temporarily evicted from its building, the Bell Foundry, in late 2016, but allowed back in a few months later after the city granted it a permit.

Janes says her group is working closely with Penn Station Partners to make sure the community is engaged in the design. “They’re very committed to taking an equitable approach.” CBP expects to raise funds so the project can incorporate artists and local small businesses. For its part, Penn Station Partners has committed to hiring city residents for 51 percent of new jobs and allocating 27 percent of contracts to minority businesses.

If the train station upgrades serve as a catalyst that inspires more people to move to the neighborhood, it will boost business for area art galleries, restaurants and performing arts groups, says Open Works Executive Director Will Holman. “Plans to densify that part of town and bring more housing would keep all the theaters and restaurants going at night,” Holman says.

In the last decade, vacancies have dropped considerably with these developments and added housing density. “People are rightfully concerned about gentrification but one of the positive things that’s really rare is you’re seeing a fairly income-diverse community,” Holman says. Redfin listings show homes selling from anywhere between $100,000 and $419,000. However, data from PolicyMap and Zillow show that median home prices in the eastern part of the district have risen from $65,000 in 2005 to $207,000 in 2017.

Pula of developer Beatty, says that the developers want to create a local arts presence in and around the station, though they don’t have details yet about what that means. It could mean hiring local artists to create works that are displayed in the public areas, creating some live/work studio space or setting aside some apartments for artists. “These are all things we’ve had some discussions about. We’re trying to get some big picture things figured out.”

Since the Jones Falls Expressway cuts the train station off from the Mount Vernon neighborhood to the south, residential buildings replacing empty lots will hopefully connect those two neighborhoods, Pula says.

“The reality is that we need to breathe life and activity and investment in a number of these places,” Pula says. “We need these vacant lots to be occupied.”

Says Keating of Baltimore Rock Opera Society: “I’d love to see some community first not community afterthought thinking on the part of these developers.”

Julekha Dash is a Maryland food, travel, architecture and arts writer who has written for USA Today, Architectural Digest, Lonely Planet, American Way, Thrillist and others. She has covered commercial real estate and urban development for Bisnow, the Baltimore Business Journal and BmoreMedia, which she edited. You can follow her on Twitter and Instagram.