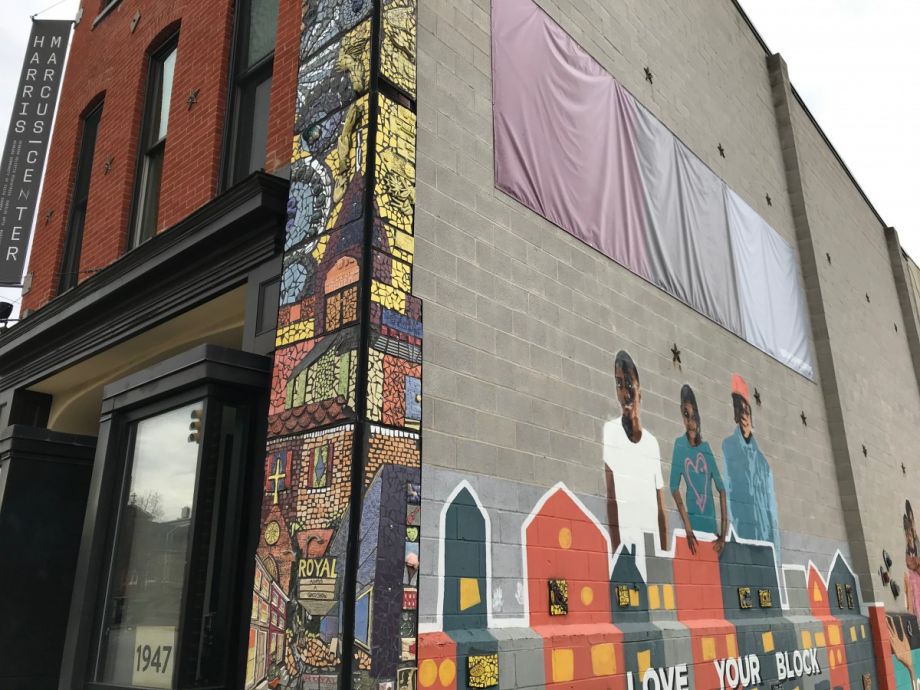 Brion Gill, known by her spoken-word artist stage name “Lady Brion,” led a walking tour of Pennsylvania Avenue on the west side of Baltimore last year. Primarily for state and local officials, the tour was part of the application process to create what would be the first Maryland-designated arts and entertainment district dedicated to black arts and culture, in a city that happens to be two-thirds black.

They started at the Arch Social Club, at Pennsylvania and North avenues, where the 107-year-old private club for black men in Baltimore has been since 1972. A few blocks down, there’s the landmark Avenue Bakery, whose owner James Hamlin has been campaigning to rebuild the former Royal Theater on “the Avenue,” as locals still call it. The former 1,000-seat venue was once a regular tour stop for many blues and jazz legends, but like many iconic black cultural venues in cities across the United States, it was torn down during the era of “urban renewal.”

“What I remember most is the way that people talked about Pennsylvania Avenue,” Gill tells me later about growing up in Baltimore, hearing stories about the Avenue from the elders in her family. “It was just this amazing place to go and to take their families back in the day. In school, when folks talked about the presence of folks like Billie Holiday, Cab Calloway, even James Brown, in Baltimore, the only place they ever referenced was Pennsylvania Avenue.”

The theme of Gill’s walking tour was “A Taste of The Avenue.” At the Upton Boxing Center, participants received popcorn and old-school Sucker Punch candy. At the Shake and Bake Family Fun Center, which the city reopened in 2018 after a year’s worth of renovations, tour participants got roller-skate-shaped lollipops in the spirit of the venue’s disco skating rink. At the Harris Marcus Center, a small arts venue and civic space that also houses the Jubilee Arts program, they handed out rice cereal treats shaped like paintbrushes, dabbed in chocolate frosting in an assortment of colors to look like paint.

The point of the tour was to show off what the neighborhood has to build on, were it to receive the designation from the state as an arts and entertainment district. Such programs differ state by state, but in Maryland the designation comes with tax benefits for artists to live, work and perform within the district as well as tax credits for new construction or renovation of certain buildings that create live-work space for artists or space for arts and entertainment enterprises. At the end of March, after just over a year working on the tedious application in earnest, Gill submitted the application to the Maryland State Arts Council to designate the Pennsylvania Avenue Black Arts and Entertainment District.

“People have been talking about a culture district or arts district of some kind along Pennsylvania Avenue for at least 40 years,” says Gill. “This is maybe the fifth iteration of this idea. I was very clear [to the coalition working with me] I’m not the first, probably not the smartest, but if you all will work with me we can absolutely make this happen because working in a coalition, working as a community is how we achieve these kinds of things.”

The coalition includes an array of people and organizations working in the neighborhoods along the proposed 1.5-mile cultural corridor, which runs through multiple neighborhoods on the west side of Baltimore, including Upton, Druid Heights, Sandtown-Winchester, Penn North and Reservoir Hill. Community master plans for these neighborhoods are starting to explicitly reference the Pennsylvania Avenue Black Arts and Entertainment District.

The proposed district is squarely in what researcher Lawrence Brown coined the “Black Butterfly,” the black neighborhoods on the east and west sides of Baltimore bracketing the “White L” along Baltimore’s Charles Street Corridor and Inner Harbor areas — a direct relic of racial zoning, which was invented in Baltimore and solidified later through redlining. As others have also studied recently, investment from the city, from banks and other investors, and from anchor institutions in Baltimore have all neglected the neighborhoods of the “Black Butterfly,” while closely hewing to the “White L.” The Station North arts district, the most successful state-designated arts and entertainment district in Baltimore, is located along the Charles Street Corridor.

Even on the rare occasions when investment did come to the Black Butterfly, like the wave of affordable housing development in the 1990s, it couldn’t help but do so without bulldozing much of the core commercial storefronts along the Avenue.

“They tore down the commercial part and put up housing on the commercial strip,” says Van Anderson, who has been the elected president of the Arch Social Club for 12 years and counting. “We do need housing, but not right up there. When I was a teenager, my friend Johnny bought his father’s car and we would go cruising up the Avenue and it was so crowded we had to drive like 5 miles an hour to get up there. This was in the late 1960s. All I can remember were all these lights and signs and people and stores.”

Where structures do remain along the Avenue, many are vacant and boarded up. One block over from the Harris Marcus Center, there are five vacant lots and a vacant building listed in Baltimore’s Vacants to Value program for city-owned vacant and abandoned properties, and there are many more listings in the surrounding area. But there are vacant buildings and lots along the Avenue that are not listed under the program.

“A lot of the closures that happened along the Avenue, those were family-owned businesses and when the elders in the family died, those businesses just went belly-up, and there was no mechanism to ensure that we could get new owners that were black folks or the same kind of business owners that had occupied those spaces,” Gill says.

Gill says the coalition will be leaning on members like the Druid Heights Community Development Corporation and Upton Planning Committee, which have experience working on residential development, to take advantage of Vacants to Value, or find opportunities to build relationships with more commercial developers to ensure that commercial as well as residential properties along the corridor are locally owned or black-owned.

“We recognize that arts communities can be purveyors of gentrification, and that folks can be shifted around and lose out of the community because the market values start to increase as arts institutions take over,” Gill says.

Most importantly, Gill would like to see that the black artists and black arts organizations she’ll be helping recruit to the Avenue will be paying rent or venue fees to people who look like them and come from some of the same places they do.

“Some places I would go [in Baltimore] and as a black person, a black woman, a black artist, I didn’t feel represented, and I almost didn’t feel welcome,” says Gill. “I remember early on thinking there should be a place for us, like there weren’t many black venues you could go if you wanted to perform, and over time the ones that did exist closed.”

Up until now, the Pennsylvania Avenue Black Arts and Entertainment District has been operating under fiscal sponsorship from Leaders of a Beautiful Struggle, the grassroots think tank in Baltimore where Gill works as cultural curator. But they plan eventually to incorporate as an independent organization, perhaps to become part landlord or part developer of black arts live-work spaces along the Avenue.

“I think it could be a part of the work of the arts and entertainment district to raise capital to acquire spaces and then doing the work to attract new businesses or others to lease or buy those spaces to promote black ownership along the corridor,” Gill says.

There is at least one venue that is already black-owned within the footprint of the proposed district: the Arch Social Club’s building, which it owns free and clear. In addition to hosting the regular meetings of the Pennsylvania Avenue Black Arts and Entertainment District, they’ve been pushing hard on running and hosting events to demonstrate the viability of the district as a destination, and not just for locals. The building sits on top of a busy Baltimore metro station connecting the intersection directly to the Inner Harbor area and its many hotels. That’s where many tourists, who account for $5.6 billion in spending a year in Baltimore, stay.

But the volunteer-run Arch Social Club recently determined they have $4 million in renovations to do in order to modernize and restore the structure. They’re banking on larger crowds owing to a black cultural corridor designation to help pay for that.

“The generation before us got it all paid off. They paid for the building with no mortgage or anything on it,” Anderson says. “We’ve been blessed the building overall is safe and sound, our generation now is responsible for getting it renovated.”