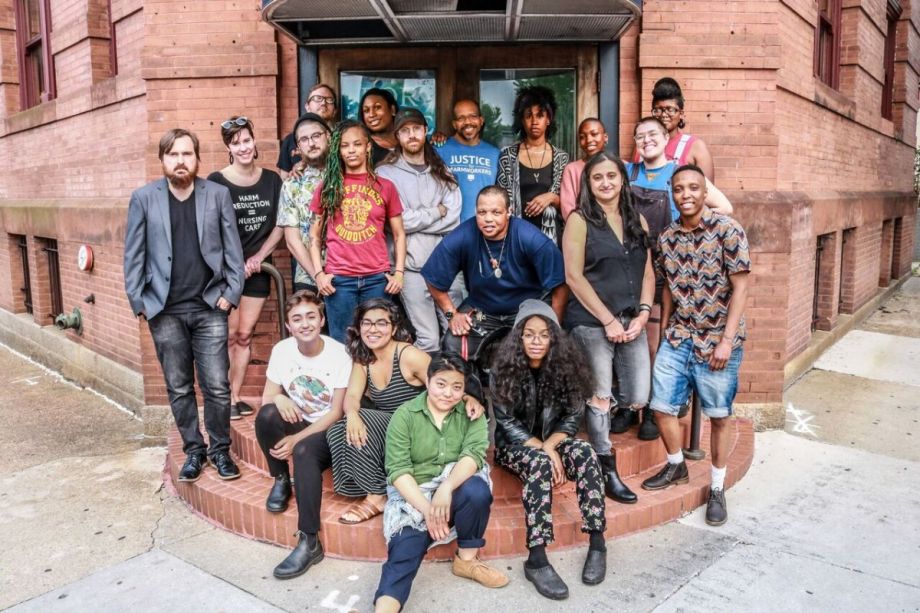 The worker-owners of Red Emma's, a worker cooperative bookstore, cafe, and event space, soon to move into a new, larger location in Baltimore's Mt. Vernon neighborhood, where the business first opened in 2003. (Photo courtesy of Red Emma's)

It was a real struggle for Red Emma’s the first time they were looking to finance a new, larger location for their bookstore and café space. What began as a small bookshop in 2004, with a vision of building infrastructure for communities centered on solidarity, was taking off. By 2013, Red Emma’s had outgrown its original location, but because it is a worker cooperative, most financing entities didn’t know how to engage.

“Nobody would take a chance on us because they didn’t understand what we were,” says Kate Khatib, one of Red Emma’s founding worker-owners.

In a worker-cooperative, each worker-owner has an equal share of ownership and management of the business, often operating on a principle of “one-worker, one-vote,” especially for major decisions like moving or expanding.

Now, Red Emma’s is on the move yet again, to an even larger space, thanks to financing from BRED, the Baltimore Roundtable for Economic Democracy. BRED is one of the local hubs for a national peer network of worker-cooperative lenders and incubators. Red Emma’s is now one of nine different Maryland worker cooperatives that BRED is currently supporting in different ways.

In addition to more space, the new location allows Red Emma’s to be a little more efficient with how they manage the different parts of the business. In their current location, covering 5,000 square feet on one floor, “there’s some flow, but there’s no functional separation between the restaurant, the coffee shop, the event space,” Khatib says. “It’s all in the same place.” That, Khatib says, has some downsides. For example, in order to open in the morning to just sell coffee, five people have to come in so that the various workstations are covered — like the bookstore checkout and the food and cafe counter, which are on opposing sides of the floor plan. An evening event often means closing down the bookstore early. With three floors at the new location, Khatib explains, each of the individual spaces can develop their own identity and schedule.

In some ways, the new location is a return to Red Emma’s roots: the bookstore sits in the basement of the three-floor site, as it did in Red Emma’s original venue. It also brings Red Emma’s back to the Mt. Vernon neighborhood where it first opened. But it’s also an indication of how the business continues to evolve. As Red Emma’s has grown and brought on new worker-owners, each shapes the business as they begin bringing their own perspectives, interests, and talents into the business. From a founding group of seven, they’re up to 25 worker-owners, all earning a living wage. The new location will allow for 10 more worker-owners — and they’re adding a bar.

“It’s something we know that is needed,” Khatib explains. “Our worker-ownership is made up of a lot of people who are representing different identity groups that are often made to feel uncomfortable in mainstream spaces. So, one of the things we are really, really thinking a lot about, especially as we increase our alcohol component, is how do we create a bar that feels safe, that feels welcoming, that does not replicate many of the problematic and uncomfortable environments that many spaces do in other parts of the city.”

Mel Gross is a newer Red Emma’s worker-owner. They originally encountered Red Emma’s while studying interdisciplinary sculpture at the nearby Maryland Institute College of Art. Gross took some time off of school and spent that time in Los Angeles, where they helped open three different restaurants.

“I think a lot about systems,” Gross says. “So, when I got to Emma’s, it was really interesting the systems that were in place there already.” Some, according to Gross, are really innovative; others are leftovers from the cooperative’s early days.

A background in sculpture also offers Gross an important lens for examining Red Emma’s space. “It is really important to have spaces that make people question their everyday interactions with spaces, and with people, more importantly,” says Gross. “So much of it is not having this coded language around who’s allowed to be in a space and what you’re allowed to do in a space.”

In many spaces in the city, there is a “white, heteronormative, gentrifier archetype,” Gross says, and that is not the community Red Emma’s aims for.

On the contrary, Khatib points out that one of the cooperative’s main goals has been to provide a sustainable source of dignified employment, especially for people representing groups that have traditionally been excluded from economic security. “People who have grown up low-income and working class, which is a huge part of our worker-ownership,” Khatib says.

Red Emma’s is almost (and likely soon to become) a majority of workers who are women, queer, and trans people of color — hard communities to be a part of in Baltimore, Khatib says. “We also have young, black men who have spent their whole lives in Baltimore,” she adds. “There’s an incredible amount of trauma that’s associated with that trajectory.”

Khatib says that as the cooperative has grown, their goal of providing family-sustaining work has gone from aspiration to reality.

“I think a lot of people were worried that we were trying to become more corporate with the move because we’re expanding,” Gross adds. “We’re trying to make something where the people who work [at Red Emma’s] have a little bit more control, a little more capital to work with. But also, where this business can become a way to fundraise and distribute money and collect ideas and share conversations in a little bit more organized way than we’re doing at the current location.”