Will Under Armour Play Ball with Baltimore Taxpayers? – Next City

Will Under Armour Play Ball with Baltimore Taxpayers? 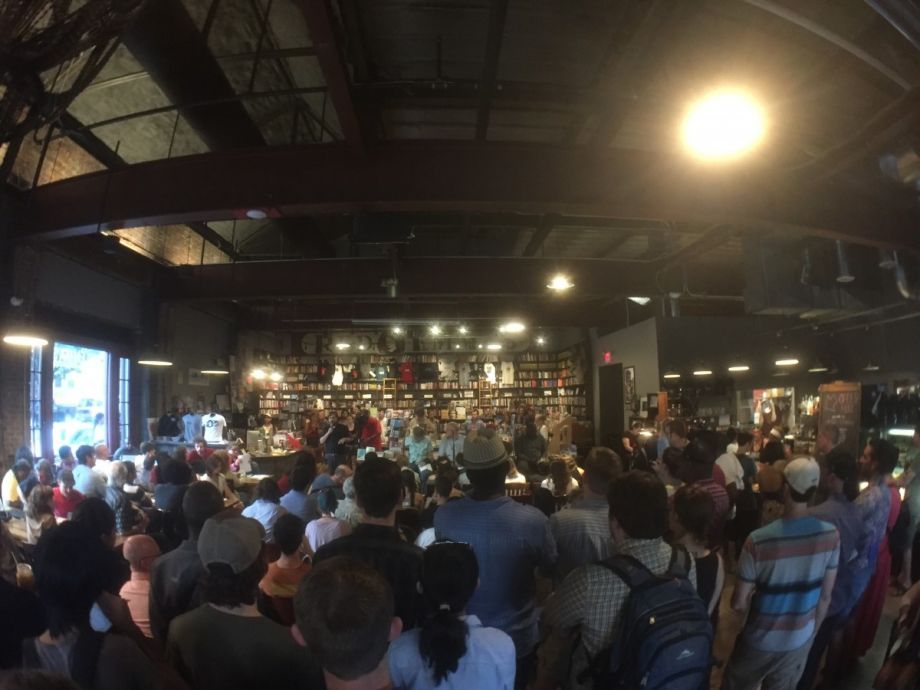 It was a standing-room only crowd at Red Emma’s, the thriving worker-owned coffeehouse and bookstore on North Avenue, a major Baltimore thoroughfare. They gathered last night to hear a panel of organizers and experts discuss the proposed Port Covington development deal between the city of Baltimore and the real estate development company owned by Kevin Plank, founder and CEO of Under Armour, the Baltimore-based sports performance apparel and accessories company. Even the bookshelf aisles behind the panel were littered with audience members.

According to all the panelists, the deal as it currently stands would be a raw deal for the city and its existing residents. The details of the deal became public on April 25, in the chaos of Maryland’s primary election that took place the following day. The speed at which the deal is moving through the approval process was a widely shared concern. Originally, Baltimore City Council President Jack Young scheduled the vote on the bill for September, but is now planning to schedule a vote by Aug. 8, according to panelist Charly Carter, executive director of Maryland Working Families. At one point during the evening, Carter invited the audience to tweet at Council Member Young (@prezjackyoung) to “#Slowyourroll, no vote on Port Covington.”

More broadly, the Port Covington deal is the latest and by far the largest in a series of development deals that have involved promises of benefits to Baltimore residents that have never materialized, cost the city more than developers initially projected and left the city with huge debts to pay off at a time when more and more Baltimore residents now associate decades of redlining, city-supported segregation, municipal neglect and overall disinvestment with the direct loss of lives past, present and future.

“As we say black lives matter, we also have to say black neighborhoods matter,” says Lawrence Brown, assistant professor in the School of Community Health and Policy at Morgan State University in Baltimore. “The Freddy Gray that gave his life last year in April, we gon’ have more of those, and when the next uprising comes, you could look at what happened with Port Covington, you could look at how we acted to protect and preserve racial segregation in our city, how we worked to preserve inequality and inequity in our city.”

Under the terms of the 534-page deal, Plank’s Port Covington project would receive $535 million through tax-increment financing, meaning that investors will buy municipal bonds to provide the capital, and the city will repay investors using the new property tax revenues created by the project.

“There’s something wrong when we have not invested one dime in Sandtown but we could find half a billion dollars to invest in the middle of nowhere,” says Carter, referring to Freddie Gray’s neighborhood of Sandtown-Winchester on the west side of Baltimore.

Plank’s proposed $5.5 billion Port Covington project proposal calls for 5,252 apartments (with rents estimated at $2,340 a month) and 77 condominium units, parks, plazas and retail, in addition to a new corporate campus for Under Armour. There would also be new bike paths and bike-sharing stations, and a special site circulator rail system that would be self-contained within the project boundaries.

While TIF financing is only a fraction of the project upfront costs, the deal would be Baltimore’s largest TIF deal yet, topping the 2013 Harbor Point TIF deal in which the city raised $107 million in TIF financing. But the initial financing is barely the tip of the iceberg. Last night’s panelists outlined the many ways that the Port Covington TIF deal is a veritable minefield of devils in the details.

“The Port Covington project is huge deal, not just because of the size of the deal, but also the length of the deal,” says panelist Scott Klingler, with Good Jobs First, the DC-based research and advocacy shop that studies corporate subsidies at every level of government. As the deal currently stands, the city would ultimately repay investors $1.4 billion over 41 years, meaning that the diversion of tax revenues to investors instead of city coffers would last that entire timeframe. “This is a 41-year mortgage,” Klingler added.

Meanwhile, according to estimates from The Baltimore Sun, 41 years of police, fire departments, garbage collection and other basic public services to the new Port Covington neighborhood would cost $2.16 billion for the city of Baltimore.

One of the main arguments that corporations put forth for TIF deals is that they will help create jobs for the city. But the Port Covington’s own proposal documents estimate that only 32.9 percent of projected jobs in the Port Covington development will go to Baltimore city residents.

Another argument in favor of TIF deals has been providing affordable housing as part of any given project. Moreover, the city of Baltimore passed a 2007 inclusionary housing law that requires most city-supported projects to include a range of income restricted residential units to ensure income diversity in the project. But due to a loophole outlined in the project proposal documents, the city has granted the Port Covington project an exemption from the city’s inclusionary housing law.

Instead, Plank’s development company and the city agreed that the goal for new Port Covington is to have 10 percent of all residential units be available to households whose annual income is less than 80 percent of area median income, adjusted for family size. Also worth nothing, there is no strict commitment that all the affordable housing units be built onsite—meaning that Plank could instead build them in existing low-income, black neighborhoods of Baltimore, if at all. One option listed in the current proposal is to simply contribute to a pool of capital that could eventually support construction of affordable units.

“There has to be a structure there to make this an inclusive community and not a monoculture targeted at exclusive culture that may or may not come,” says panelist Barbara Samuels, managing attorney for ACLU of Maryland’s Fair Housing Project.

Adding fuel to the segregation fire, according to Brown, Plank’s development company has said they want to recruit the creative class nationally to come and live in Port Covington. Pointing to Richard Florida’s study of creative class demographics showing it is only nine percent black, nationally, Brown contrasted that with Baltimore being 63 percent black. “Which means that this project would intensify racial segregation,” he said.

The previous Harbor Point TIF also points to further devils in the details. That project has since experienced massive cost overruns, forcing the city to issue a second round of TIF bonds just last month to raise $36.8 million in additional financing for Harbor Point.

Add to that the fact that the state of Maryland generally awards local school systems funding to make up for disparities in property taxes, but the state uses a formula that is based on property values. The Harbor Point TIF did in fact boost property values for Baltimore, but that meant the city lost $24 million in school funding from the state because of higher property values. Because the city had to use new property tax revenues to repay investors for the TIF financing, there was essentially no new property tax revenue to make up for that funding loss to the school system. State legislator Maggie McIntosh got a three-year fix for this issue passed, protecting Baltimore’s school budget for now, but it remains on the radar for advocates.

How such a raw deal could already be so far along in negotiations between the city and the developer, and already so close to gaining approval, was no surprise to at least some in the audience.

“I don’t think the majority of people sitting here were naive as to the extent of capitulation that Baltimore city government has made with this particular developer,” Brian Murray told me. Murray is the pastor at New Covenant Community United Church of Christ, just outside of Baltimore. He also recently became co-chair of BRIDGE Maryland, a coalition of churches that do community organizing throughout the state. “I think the overall narrative of for lack of a better word, capitulation with developers for the fear that there won’t be investment in Baltimore has caused some decisions that defy logic,” he added.

Murray will be among those who testify at the first of two public hearings on the Port Covington TIF, later today at the War Memorial Building, in downtown Baltimore.

“I think a TIF of this magnitude, and a project of this magnitude could be revolutionary for the city of Baltimore. The question is always going to be what kind of negotiations the city goes into with a developer, to look out for binding agreements to get some things that are in the best interest of the citizens,” Murray says.

A public rally at 3 p.m. Wednesday, organized by Maryland Working Families and its allies, will precede the 5 p.m. hearing.