Manufacturing Isn’t Dead; Stop Zoning Like It Is – Next City 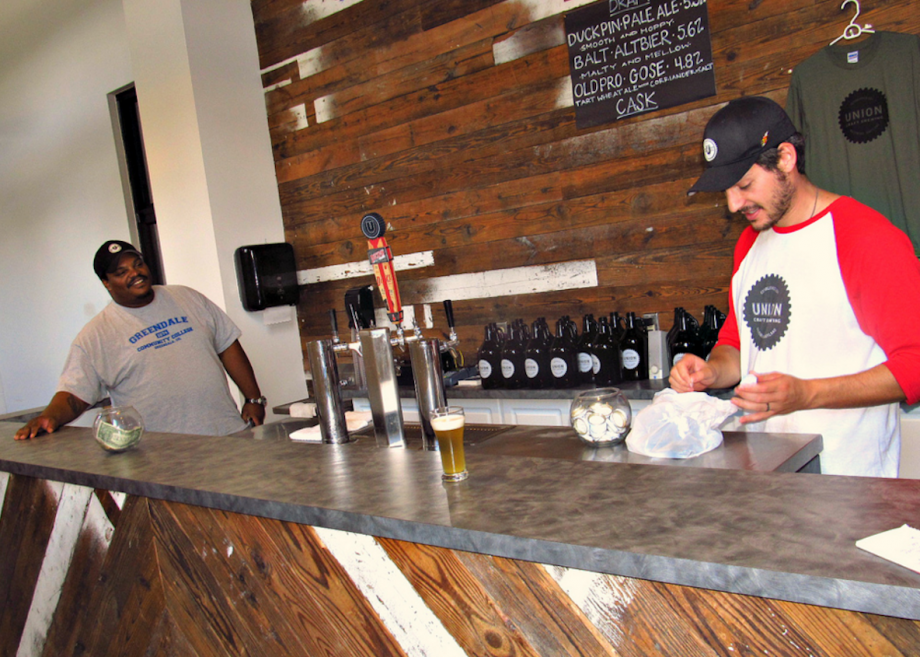 Last week I took a group of visitors on a tour of some of Baltimore’s most promising new employers. No, these weren’t the tech companies housed in a sleek co-working space or “eds and meds” startups that you keep hearing about. Instead, we visited a variety of workshops, warehouses and makerspaces and ended our tour at a place called Union Craft Brewing.

Union is one of Baltimore’s best success stories of the past decade. In just four years, the home-grown company has grown from a team of three founders to more than 20 employees. The micro-brewer is distributed statewide and is looking to triple its production in the next five years. There’s only one problem: Union’s current facility is too small to handle this rapid expansion. Despite being located in the heart of Baltimore’s historically industrial Jones Falls Valley, the brewer has spent months searching unsuccessfully for a new space. Its neighbors across the river (a plastics company and a Pepsi bottling plant) plan to vacate their facilities in the next 18 months, and the locations would be perfect for Union. But a handful of residential developers are busy convincing the city to rezone these industrial sites to suit their plans instead. If that happens, the city stands to lose not only the existing jobs at Union Craft Brewery and more than 100 new jobs the expansion will create, but hundreds of other employment opportunities in a resurgent sector that many people seem to have mistaken for dead.

Between 2005 and 2015, Baltimore down-zoned over 400 acres of industrial land to residential or commercial categories. During that same time, it added only 67 acres of new industrial zoning, all at the former site of the Hollander Ridge public housing project, demolished in 2000. With the massive forthcoming Port Covington development (led by Under Armour CEO Kevin Plank) and the aforementioned projects in the pipeline for the Jones Falls Valley, Baltimore will likely end up losing much more industrially zoned land in the coming years.

Much of this rezoning has been at the request of developers working along Baltimore’s waterfront neighborhoods, smelling gold beneath the rust. Many in Baltimore champion the renovation of old industrial buildings into luxury condos and yoga studios as “creative placemaking,” turning our obsolete past into an industrial-chic future. But as a wave of development sweeps over (certain parts of) Baltimore, we should stop and ask: Whose future are we building?

The reality is that once a city gives up an industrial area, it never comes back. An industrial building-turned-luxury-apartment-complex can generate in one month of rent what an industrial user would pay in a year. Oftentimes, the neighbors — especially if they are also newcomers to the area — are happy to see the change, because it means an end to the noxious smells and loud noises of the former tenant, and if they own, an increase in their own property values. For local governments, it means an increase in the tax base. So from a market perspective, everybody wins.

But if you look closer, the math gets fuzzy. Especially in a city like Baltimore where 75 percent of residents over the age of 25 do not have a college degree and unemployment levels hover around 8 percent. For young black men in Baltimore, unemployment is around 37 percent. The roots of this jobs crisis can be at least partially attributed to the sharp decline in manufacturing jobs in our region over the last 50 years, driven by companies offshoring their operations.

Today, when you break down employees in the manufacturing sector by educational attainment, the largest group falls into the category of having a high school degree equivalent or less. Yet these employees on average have full-time positions, earn a living wage and receive benefits. Conversely, the new jobs that come with mixed residential/commercial redevelopments and are available to people with a high school degree or less, tend to be chain-store retail, service sector or janitorial positions. These types of jobs not only have lower hourly wages than manufacturing jobs, but are also rarely full-time, and therefore rarely come with any kind of benefits. The lack of opportunity for young people in Baltimore was at the heart of the uprising the city experienced last spring.

But what we saw on our tour of Baltimore’s new wave of manufacturing businesses was a sector that was eager to employ young people, a sector with energy.

While Baltimore saw a decrease in manufacturing employment between 2004 and 2014, it also saw a 247 percent increase in the number of non-employer advanced manufacturing companies (think of a person making widgets in her garage with a 3D printer). As new manufacturing technologies become more affordable and accessible, more people will have the opportunity to go into the business of making things. What this may mean is that new technology in the U.S., combined with rising labor and energy costs abroad, could make manufacturing in the U.S. profitable once again. Already companies such as The Keer Group, a Chinese-owned textile company, have crunched the numbers and moved manufacturing operation from China to the U.S.

But if more manufacturers follow the lead of Keer, will our cities be ready? By eliminating industrial land use from cities like Baltimore, we are also eliminating our capacity to support manufacturing jobs that are accessible to urban residents. Should a company seeking to establish a new factory in the U.S. go looking for space, they will likely find it in areas that are not accessible by transit, locking out large segments of the population from opportunity.

This may be what happens to Union Craft Brewing if they cannot find a suitable expansion site in Baltimore.

To be clear, I don’t believe that all industrial operations are a good fit for cities. Earlier this spring, a young woman in Baltimore named Destiny Watford received the prestigious Goldman Prize for her work with the Free Your Voice campaign, fighting against the construction of a new trash incinerator in her neighborhood. Heavy industrial operations that pose public health risks such as these do not belong in urban communities (if anywhere). But light manufacturing operations, such as furniture production, food production or clothing production, pose little threat to public health, and offer the kinds of jobs that many U.S. cities so desperately need.

Meanwhile, the redevelopment that does come to our urban core will look much like the luxury-living plans in store for Port Covington and the Jones Falls Valley, and will be targeted to an upwardly mobile generation of suburbanites seeking a more urban lifestyle. That’s whose future we are currently building.

If Baltimore and cities like it want to build a future that offers opportunities for everyone, we need to hold the line on light industrial zoning, and think hard about ways we can rebuild our base of working-class jobs, and ultimately, the pathways they offer back into the middle class. If we fail at this, last year’s Baltimore Uprising will have only been the beginning.

Andrew Cook is a photographer and writer. His work moves between fine art and editorial, focusing consistently on issues of contemporary urban life. He has published two books of photographs and contributes regularly to Next American City. Cook will be enrolled at MIT in the fall as a candidate for a Masters of Community Planning. Until then, he will be making sandwiches in the woods of Vermont.