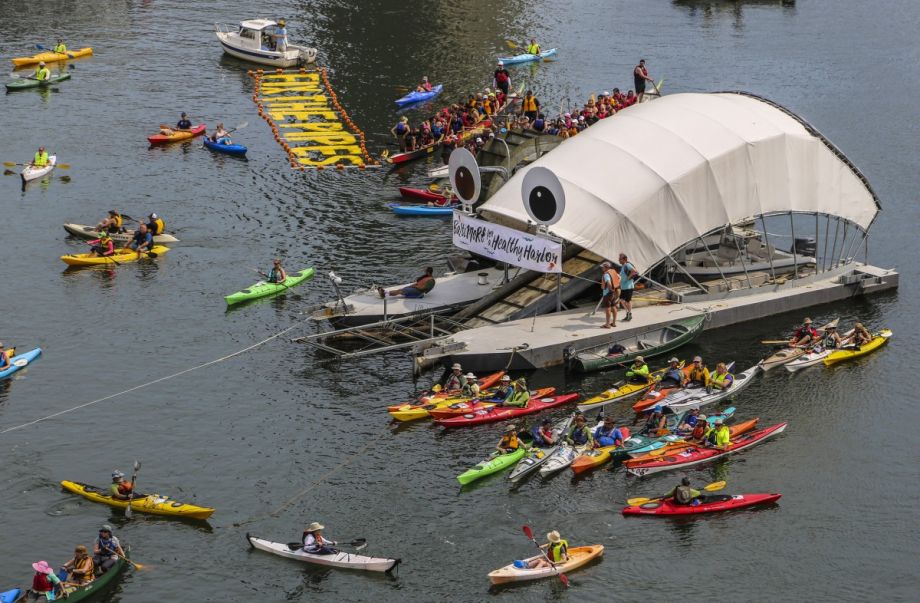 Activists rally around Mr. Trash Wheel in July, demanding that the city “fix the pipes” and put an end to sewage overflows. (Credit: Waterfront Partnerships)

At the moment, Baltimore nonprofits Waterfront Partnership and Blue Water Baltimore measure water quality in the city’s harbor every other week. But the United States Geological Survey (USGS) is going to install a real-time monitor at the mouth of the harbor’s largest water source. In addition to allowing the public greater access to water quality information, the new tool should help environmentalists pinpoint where exactly pollution is coming from and when. Along with the biweekly sampling, the sensor will support efforts to make the Baltimore Harbor swimmable and fishable by 2020 by cutting down on the three major sources of pollution: trash, sewage and stormwater runoff.

To do so, Waterfront Partnership has been developing both upstream and downstream solutions. Mr. Trash Wheel, a 14-foot solar- and hydro-powered water wheel that scoops floating garbage out of the water and onto a barge headed for a waste-to-energy plant, has become something of a local celebrity. He’s been gloating on social media after gathering his millionth pound of trash last week.

Building off this popular “character,” and taking advantage of his strategic location at the mouth of the Jones Falls River, the new USGS monitor will be located nearby. It’s a demonstration project for a new joint USGS and EPA initiative known as Village Blue, a spin-off of the Village Green Project, which similarly logs real-time air quality information in six locations across the U.S.

Adam Lindquist, director of the Waterfront Partnership’s Healthy Harbor Initiative, says while the nonprofit’s biweekly sampling helps paint a picture of the harbor’s average pollution levels, minute-by-minute monitoring will lend new detail. “You’re now going to be able to see both what your baseline conditions are, but also you’ll be able to zoom in and say what happened during these particular instances or large storm events, how did that impact water quality,” he says.

That could prove particularly valuable in tracking the city’s progress with eliminating combined sewer overflows. This summer, regulators gave Baltimore another five years to repair and replace parts of its aging sewer system, which has been sending “a persistent flow of sewage into our waterways,” according to Lindquist, despite an $867 million investment over the past 14 years.

The new consent decree, signed in July, commits the city to another $1.2 billion of repairs spread out over three dozen projects. That includes closing two pipes that currently spew waste directly into Jones Falls during rain storms by 2021. According to the Baltimore Sun, regulators estimate that work would cut sewage leaks by 83 percent.

The new monitor will also increase transparency, with the information being uploaded directly to an EPA website. “This initiative will provide the public with access to and understanding of water quality data they can use in a number of important ways,” said Shawn M. Garvin, EPA regional administrator, in a statement. “The information will help people become better stewards of their local waterways and take actions to protect their health by reducing exposure to contaminants.”

That information could help people make decisions about whether conditions are safe enough to use their waterways for kayaking and other recreation, says Lindquist. But he hopes people value the harbor’s health for the health of other creatures too.

“One of the things we work on educating people about is how much life there is in Baltimore Harbor,” he says. “There’s a perception among much of the public that it’s a dead waterway where nothing can survive. But the opposite is true, it’s teeming with life.” Including blue crabs, fish and over 200,000 baby oysters the nonprofit is cultivating in cages hung from piers. When they get older, they’ll be transported out into the Chesapeake Bay where they’ll form a water-filtering reef.

Because while Waterfront Partnership is working closely with the city’s public works department on fixing the sewage system, and supports upstream stormwater solutions as well, Lindquist says the nonprofit is looking to new technologies — like the trash wheel — that can address pollution in the waters today. They’ve installed about 2,000 square feet of water-filtering floating wetlands, and plan to expand soon to over 3,000 square feet.

But despite progress, the Inner Harbor and Jones Falls received an F in water quality for the third year in a row in May, with fecal bacteria from the sewage overflows still the primary concern. That raised doubts about the 2020 goal for fishing and swimming. “We certainly still have a long way to go,” says Lindquist, adding, “We have a lot of reasons to be optimistic.”