Backlash Against a Bicycling Ban in Calcutta Gains Momentum – Next City

Backlash Against a Bicycling Ban in Calcutta Gains Momentum 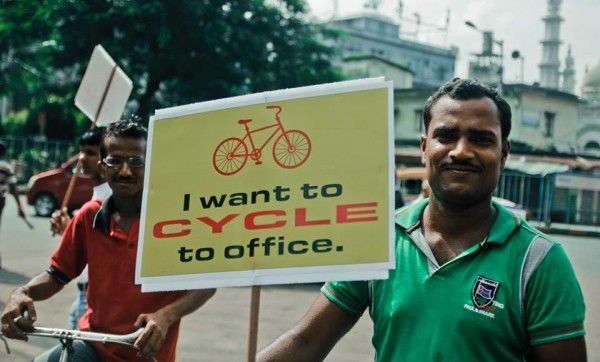 When Paraj Chakraborty managed to clinch his first job for modest pay at a small media firm in south Kolkata, he was happy for two reasons. First, he would no longer be unemployed. And second, he knew he would not need to spend any money or fight any traffic commuting to work. With his new office only five kilometers from his home, it would be easy enough to get there by bicycle.

For nearly three years, cycling to the office was bliss for the 27-year-old commuter, until the Kolkata Police extended a ban on bicycling to 174 major roads. Biking has long allowed the city’s workers to get around at will for almost nothing, and helps ease the burden on the city’s overtaxed transit systems, whose riders jostle it out on jam-packed buses and trains. In addition, Kolkata is one of the world’s most polluted cities, suffers from a crumbling infrastructure and has a level of traffic congestion that suggests a constant state of mass evacuation.

So when the bicycling ban was imposed this year and the “Cycle Prohibited” signposts were hung, the city’s residents were shocked. After all, many world-class cities around the world are encouraging cycling as a mode of transport, laying out dedicated corridors for bikes. Kolkata’s ban restricts cycle vans, hand carts, pull carts, bakery vans, bicycles and tricycles from entering the city’s main roads. (It was first imposed in 2008 on a few roads, but the latest order greatly expands it).

Environmental groups have decried the ban. Says a Greenpeace petition aimed at the city’s police: “We are shocked to hear that the Kolkata Traffic Police have passed an order banning cycles from 38 major roads in the city [in total 174 roads]. Your department’s decision to ban cycles will make life for the common man difficult.” According to Greenpeace, data of the Union Ministry of Urban Development shows Kolkata residents make nearly 2.5 million cycle trips a day, second only to Delhi among Indian cities.

“Most of the people who ride cycles to work are daily wage earners, security guards, etc., or in a sense people who can’t afford even public transport,” says the petition.

With a population of nearly 15 million, the urban agglomeration of Kolkata is among the most densely populated in the country. At least 7,750 people live in one square kilometer area. Cycling helps make such extreme density functional – indeed, while Kolkata has the lowest number of private cars among major Indian metro areas, it also has the least amount of road space, only about six percent.

That’s part of the reason why, according to Greenpeace, Kolkata is the only metropolitan city in India where trips by bicycle (11 percent) outnumber trips by cars (eight percent).

So when the police started ticketing cyclists and seizing their bikes for “trespassing into the roads where they are banned,” cycling activists took to streets, as cyclists are apt to do.

“Everywhere in the world, bicycling is reclaiming the city roads despite polluting automobiles. In Kolkata the right to ride on pollution-free bicycles is instead being curbed,” says Gautam Shroff of the cycle enthusiasts’ group Ride 2 Breathe. Shroff is one of the citizens behind the Cycle Satyagraha protest. Satyagraha, which means “insistence on truth,” is a non-violent form of civil resistance that was started by Mahatma Gandhi against the British rule in India.

Amid regular honking by motorized vehicles, hundreds of cyclists led by Shroff and his compatriots joined a massive protest against the ban in September, riding their cycles from the heritage building Victoria House to the Press Club in the heart of the city.

The ban has inadvertently united a broad swathe of the city’s activist groups. Besides Ride 2 Breathe, the protest movement was initiated by Switch ON, an organization committed to sustainability and equity. They are also supported by many civil society organizations including PUBLIC (People United for Better Living in Kolkata), the Public Relations Society of India, Greenpeace, WWF Kolkata and the Centre for Environment and Development.

Demanding immediate steps by the West Bengal government, cyclists signed an open letter to State Chief Minister Mamata Banerjee, urging her to lift the ban and set up a cell, or government agency, for non-motorized transport. And an initiative called “Every Turn of the Wheel is a Revolution!” was launched in the city with a march wherein hundreds of citizens paraded down the streets of Kolkata, cycles in hand.

“For a large number of people in the city, cycling is indispensable, from minor traders and suppliers to carpenters and masons, from the milk man and newspaper vendor to office clerks and courier delivery boys, the city depends on it. Nearly 2.5 million cycle trips are made every day,” wrote Vinay Jaju from Switch ON on the initiative’s Facebook page.

Ekta Kothari of the same organization holds that separate cycle lanes could speed up traffic in the city, which currently crawls along at between 14 and 18 kilometers per hour. “Cycles can easily match that, if not better it,” says Kothari. “If we could build separate cycle lanes, they would decongest the roads and help people travel faster.”

Kothari and other activists point to Delhi, where the city’s Master Plan 2021 recommends cycle tracks for all roads. Mumbai inaugurated its first 12-kilometer cycling track in 2011, in part to ease congestion on the roads. Chandigarh in north India constructed 160 kilometers of wide cycle paths between 2001 and 2003. And India’s federal government gives priority to the construction of cycle tracks and pedestrian paths in all cities under the National Urban Transport Policy.

When I contacted Dilip Kumar Adak, Deputy Commissioner of Police for the Traffic Department in Kolkata, he sounded mellowed and revealed that the department is reviewing the ban in the wake of the demonstrations.

“We are reviewing the order following protest,” says Adak. “We are taking the suggestions of the citizens of Kolkata and then we will make a decision.”

But Adak warns – perhaps counterintuitively – that with just six percent of Kolkata’s land area given over to road space, there just might not be enough space on the streets to accommodate bicyclists.

“We have made some bus lanes,” he points out. However, “It is impossible to have cycle lanes in the city with so little road space. But we are still reconsidering our decision.”

Update: After I wrote this blog post, I received the following email from Ekta Kothari via Change.org:

The Kolkata Police responded! After more than 7,000 people signed my petition, the Kolkata Police contacted me yesterday. They want me to meet them on Tuesday to discuss the cycle ban in Kolkata. This is great. Help me reach 15,000 signatures before I meet them. Forward the email below to your friends and ask them to sign my petition.