Back to New York – Next City

Back to New York 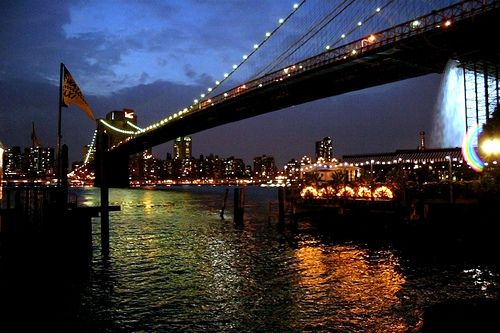 There are the yellow lights of factories, strung from Newark to the Lincoln Tunnel, bright in the dark outside my bus window. They line the steel skeletons of industrial towers and the round, unlabeled chemical containers. A Monday night in April, I am riding the BoltBus from Philadelphia home to New York and greedily absorbing it all – the factory lights, the Long Island Sound, Newark Airport, and tall, spindly trees and buildings. I am curled in a window seat, reading Eli Clare’s memoir, Exile and Pride, for my Disability Studies class or staring out the window — mostly both. I feel my body moving closer to the landscape of home.

As an Urban Studies major at the University of Pennsylvania, I often take my attachment to New York City’s grime and big-city glitz for granted and see it only as a testament to my appreciation of place and space. But on the Monday night BoltBus ride, Clare’s memoir helped me understand my giddy, bubbling sensations as the bus approached the corner of 34th street and 8th avenue– its final stop – right outside Tik Tok Diner. New York might be the reason for everything – my Urban Studies major, my interest in city parks and public spaces, and my desire to write about these spaces as I do here.

Eli Clare, a queer, disabled activist-writer, strives to create coalitions, or to find similarities, between different sociopolitical groups in his memoir. He points out, for example, that disability activists and prison activists both discuss institutionalization and loneliness, and that environmentalists and loggers both talk about their appreciation for old-growth forests. Clare’s keen interest in multi-issue politics stems from his multiple identities. Born as a woman and raised in the logging town of Port Oregon, Clare is a proud “hick” and “dyke,” very involved in the lesbian community, and a person with cerebral palsy. Clare left Port Oregon to live safely and openly and to pursue a wider range of career opportunities.

Clare often omits any mention of his attachment to Port Oregon from his environmental-queer-activist discourse. However, in his memoir, he advances a more visceral, less ideological notion of space, writing:

What I don’t say is how homesick I feel for those place names, plant names, bare slopes, not nostalgic, but lonely for a particular kind of familiarity, a loneliness that reaches deep under my skin, infuses my muscles and tendons.

Here, Clare demonstrates that place exists not only in grounded academic study or as the physical manifestation of an ideological principle but as a psychic and bodily consciousness. Port Oregon is a part of Clare and makes him whole. Clare recognizes this tangible space as he would an arm, an eye or even a family member. The connection is innate, visceral and deeply satisfying.

I read this text as I snuggled into my city sidling up toward the hard edge of the bus seat and pressing my face to the window. My body relaxed as we entered the city, feeling full, calm and peaceful. In these words, I found reason for my attachment to New York. The stops on the Long Island Railroad are my blood cells and places. And the city itself – all five boroughs – is an organ, albeit a nonphysical one. This text also helped me to another reason for my fascination with Urban Studies: In addition to learning about the space of the city from an academic perspective, with history, philosophy, sociology, and design in mind, the study of the city gives rise to new and numerous identifications with place. Urban scholars will find that each city they study will evoke in them a mental and bodily reaction. The city space meshes with human consciousness and gives rise to a plethora of new sensations and excitements.

Sometimes, instead of immersing oneself in the authentic space, a pseudo-space might be created to bring restore an individual’s fullness of body and mind. Clare does this in his Michigan home, writing:

I have filled my house with photographs, maps, stones, shells, sand dollars, fir cones, and wood to remind me of the landscape I still call home, a landscape that includes the sights sounds, and smells of logging and commercial fishing.

Spatial identity does not die. It might hibernate for months or years, but will inevitably resurface with a scent, a painting, or a bus trip.

A spatial-psychic-bodily connection between the city and the human provides reason to study, sustain, and work for progress in declining cities. A city not only dies spatially, but in its death, destroys human parts. In an April 18 screening of Dateline’s America Now: City of Heartbreak and Hope, correspondent Chris Hansen interviews Detroit native and singer-songwriter Kid Rock. Kid Rock wistfully looks away from the camera as he speaks about his residual attachment to the city. He acknowledges the crime in Detroit, the abysmal home values, and the empty downtown, but still maintains that Detroit is a “great city.” He adds that this is largely due to the “spirit” of its people. Still, he cannot separate his being from the fate of this declining city and often gives charitable donations to needy Detroiters to mark this connection.

Kid Rock, Eli Clare, and I (and probably you too!) are all connected in our throbbing and aching attachment to a city of sorts. And although this bodily and psychic approach to Urban Studies might differ significantly from that of an objective academic, it also provides reason for the origin of city studies as well as for continual research and writing on physical space. I study the city because the hollow of Penn Station can fit into a chamber of my heart and the road to New York extends from the sliver of my pinky.