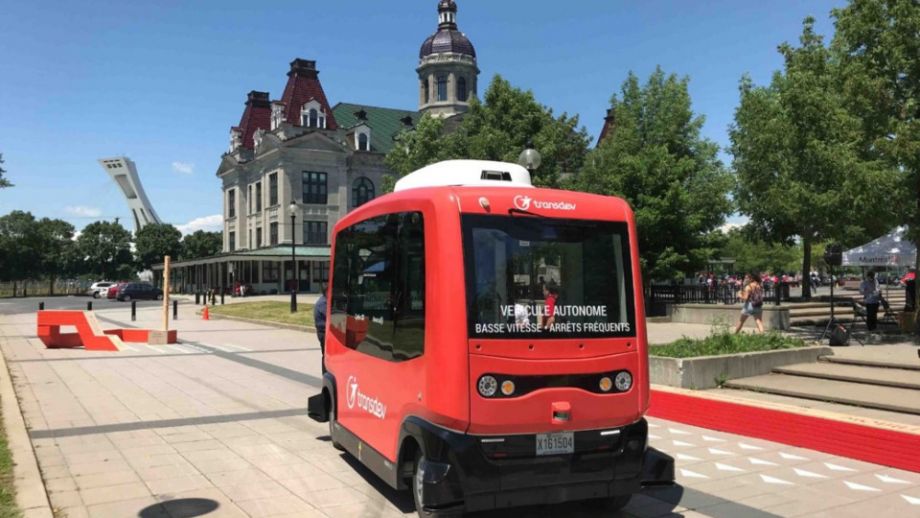 The service is the result of an ongoing test project run by a partnership of Transdev Canada and the city of Montréal. Two EasyMile EZ10 shuttles will operate between Maisonneuve Market and the Olympic Stadium through Aug. 4. The 12-passenger vehicles will operate on the 1.4-km (0.87-mile) route at an average speed of 15 km/h (9.3 mph), taking six minutes to complete a trip in one direction. Even though the vehicles will run by themselves and are equipped with GPS, cameras and LIDAR to detect obstacles, the minibuses will have operators on board to take control should the situation require it.

In addition, traffic signals along the route have been equipped with systems that communicate with the shuttles to give them priority.

The demonstration service is free to ride. Transdev, the city and Stantec, which performed the engineering work on the vehicles and communications systems, will use the information collected from the pilot to gauge passenger acceptance and determine how these vehicles can become part of a more sustainable transport system for Montréal.

The project is the first to operate in a dense Canadian urban core and the second to launch in the country after the Québec government permitted operation of autonomous vehicles on public roads in the province on a demonstration basis in May of 2018. The first demonstration project, a one-year pilot launched by a partnership of Keolis Canada and Navya, has been in operation in the Montréal suburb of Candiac since last August.

New airplanes have made increasing use of carbon fiber to reduce their weight and energy consumption. Passenger rapid transit cars stand on the verge of joining them now.

Development of the first metro car with a carbon-fiber bodyshell continues to advance in China, where Metro Report International reports that CRRC Qingdao Shifang recently completed test runs in Qingdao.

CRRC unveiled the first prototype of a carbon-fiber metro car at InnoTrans 2018.

According to CRRC Qingdao Sifang’s Deputy Chief Engineer Ding Sansan, this prototype is 13 percent lighter than its predecessors. Its lighter weight and advanced propulsion system could result in energy savings of 15 percent or more. This is a notable advance in weight reduction over the first prototype, built by another division of CRRC, which was estimated to be about 35 percent lighter than conventional steel or aluminum metro cars.

The third prototype also has improved soundproofing, “smart” air conditioning and lighting, and windows that serve as touchscreen computers. It was also built for automatic operation at a top speed of 140 km/h (87 mph), significantly faster than the 80 km/h (49.7 mph) top speed of the previous prototypes.

Dallas Area Rapid Transit (DART) has received a $67.6 million grant from the Federal Transit Administration that will allow it to undertake a major capacity-expansion project on two of its four light metro lines, Railway Age reports.

The project will lengthen the platforms at 28 stations on the Red and Blue lines that currently can handle only two-car trains. When complete, all 28 stations will be able to accommodate three-car trains.

The FTA grant covers a little less than half of the project’s estimated $128.74 million cost. Funding from the Texas Department of Transportation and DART will cover the rest.

“Commuters in Dallas can now look forward to longer trains and a better commute,” FTA Acting Administrator K. Jane Williams told Railway Age. “We are proud to partner with the Texas Department of Transportation and DART to accommodate growing transit ridership and promote economic development as jobs and population in the Dallas area continue to increase.”

Plans to redevelop the site of Oslo’s former airport got a major boost when the Norwegian government, Askerhus County Council and the cities of Oslo, Bærum, Skedsmo and Oppegård reached agreement on funding a new Oslo subway extension, according to a report in the International Railway Journal.

The Forenbu Line will extend the Oslo metro to the Forenbu peninsula, where the airport once stood. The 8.2-km (5.1-mile) underground line will run from Majorstuen in Oslo’s city center to Forenbu Senter, one of six new stations to be built on the line. Forenbu Senter is the site of a major residential and commercial development being built on the Forenbu airport site. The airport closed in 1998 when a new international airport opened at Gardemoen. Total running time in one direction will be 12 minutes.

The Norwegian government will pick up half of the project’s 16.2-billion-krone (US$1.9 billion) price tag, with the county and local governments covering the rest. Work on the line should begin in March 2020, and the line should open for revenue service in 2026 or 2027.

EDITOR’S NOTE: This article has been corrected to clarify details around the autonomous shuttle pilot project in Montréal.