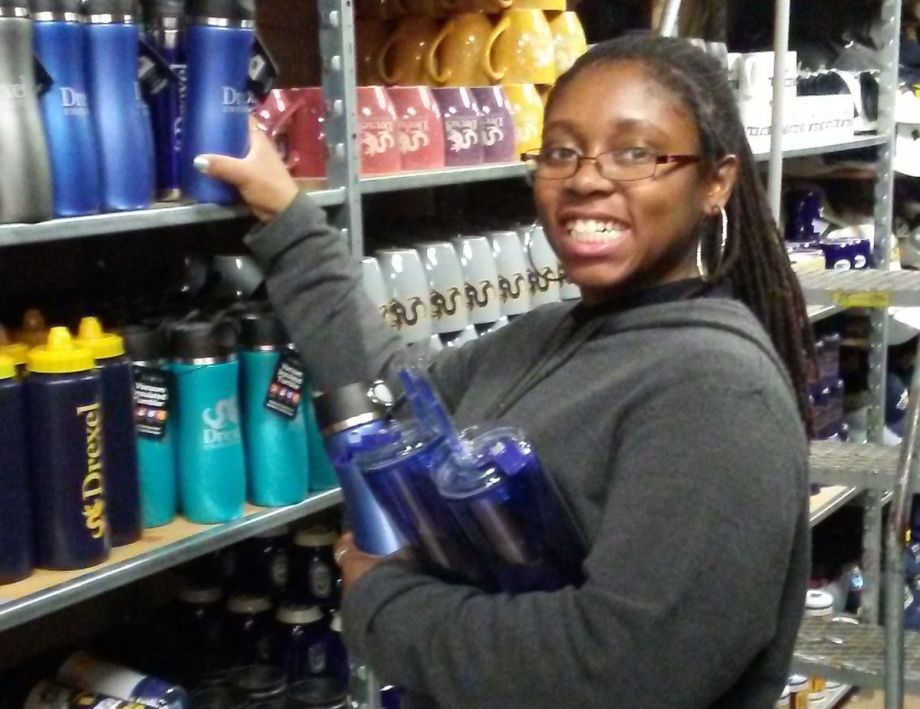 Adrienne Walls is in the middle of her third internship thanks to the Project SEARCH program, a job training initiative in Philadelphia for people on the autism spectrum that’s being hosted by Drexel University.

The 20-year-old used to help out at the university’s student center. After that she went on to work with the transportation department, surveying campus to make sure parked cars had the right permits.

This current job’s her favorite, though. “I like doing job applications, doing emails, and going to Barnes & Noble every morning,” she says. She’ll do one more internship through the program before graduating and going out to hunt for work.

Project SEARCH is finishing up its pilot year at the A.J. Drexel Autism Institute, and Walls is one of seven students from local public schools who will finish at the end of spring. The program started at a Cincinnati hospital in 1996, and has since been replicated at the city level in every U.S. state and 11 countries.

But this one’s a flagship, as it’s the first time Project SEARCH has been incorporated by a higher ed institution. It’s backed by a lattice of regional and state support programs that’s partly funded by the 2014 Workforce Innovation and Opportunity Act, a federal job training support program. Partners include the School District of Philadelphia, the Pennsylvania Office of Vocational Rehabilitation and Pennsylvania Department of Behavioral Health and Intellectual Disability Services.

Dianne Malley, a project director at the A.J. Drexel Autism Institute, says the first group has gone so smoothly — training in data entry, bookseller services, hospitality and more — they’re looking to speak with more local businesses to bring in a few more industries for the 2017-2018 school year.

“Unemployment rates for people with autism are staggering,” says Malley. With one in every 68 newborns in the U.S. classified on the autism spectrum, she says it’s time to start finding ways to integrate this population into the working class. “Many are underemployed, or they have far more skills than they’re using at their positions.”

About one-third of autistic youth in the U.S. don’t go on to get a postgraduate education or a job after high school, and nearly 20 percent of U.S. citizens with disabilities aren’t in the workforce. Nonprofits like Autism Speaks claim employment is so low only because employers haven’t researched how people with disabilities like autism can contribute to the workplace. (They started a jobs board for autistic workers, called TheSpectrumCareers.com, to try to reverse that culture.)

That’s why Project SEARCH is “huge for these individuals’ lives,” says Malley.

Clayton Walls, Adrienne’s father, agrees. He was reluctant to submit Adrienne to the program at first, knowing she’d have to navigate Philadelphia’s public transit system to get to and from work multiple times a week.

At first, he was shocked the Project SEARCH team would even suggest such a commute. “Anytime we went out [before], we took her, or someone we trusted took her to wherever she was going,” he says. In the first days of the program last fall, he’d get on the bus with Adrienne and tell the bus driver to make sure she got off at the right stop.

But Project SEARCH’s team shadows interns as they make their first attempts at a morning commute, keeping their distance in transit and stepping in if interns make a mistake. Adrienne’s on her own now.

“She leaves here at 7 in the morning, and I watch her go down the street, and then at 4 o’clock she comes right back,” says Walls.

The program claims its approach to vocational training has an 80 percent job placement rate across its 300 sites in the English-speaking world. Placement in this case means a graduate finds a job that runs 16 hours or more a week, is year round, pays minimum wage or higher and has an integrated workforce, where those with intellectual disabilities work side-by-side by those without.

But despite its reported success, there’s one alarming issue about the program. Students who go through its yearlong pipeline don’t get paid.

Its website sizes it up with the clinical rotations that medical students have to go through, calling them “unpaid student work experiences,” or unpaid internships.

In a 2010 fact sheet from the U.S. Bureau of Labor, the federal government offers some clarity on the “free work” issue in a description of whether or not interns qualify for pay. It says if interns are performing “productive work” like assisting customers or filing items, then whatever light skills training they leave the program with “will not exclude them from the [Fair Labor Standards Act’s] minimum wage and overtime requirements because the employer benefits from the interns’ work.”

Malley, however, says one of the particulars that keeps it outside the Bureau’s “employment” definition is that the employer engages with the internship to help train them, often costing managers and workers time when they weren’t in need of any store help. Those are two stipulations that could balance Project SEARCH further away from the Bureau’s exception.

Clayton Walls says he doesn’t take issue with his daughter not getting paid. “To me, this is a lot better than her going sitting in a classroom in an autism support class all day, just to finish out her last days of high school,” he says. “She feels like she’s a part of something, she feels connected — it’s an adventure. What she’s doing now opens the door for a lot of things to come.”

Adrienne, meanwhile, says she’s ready for whatever follows that adventure. “After I graduate Project SEARCH, I’d like to work at a store,” she says, noting that her favorite part of working at Barnes & Noble is getting to sell T-shirts.