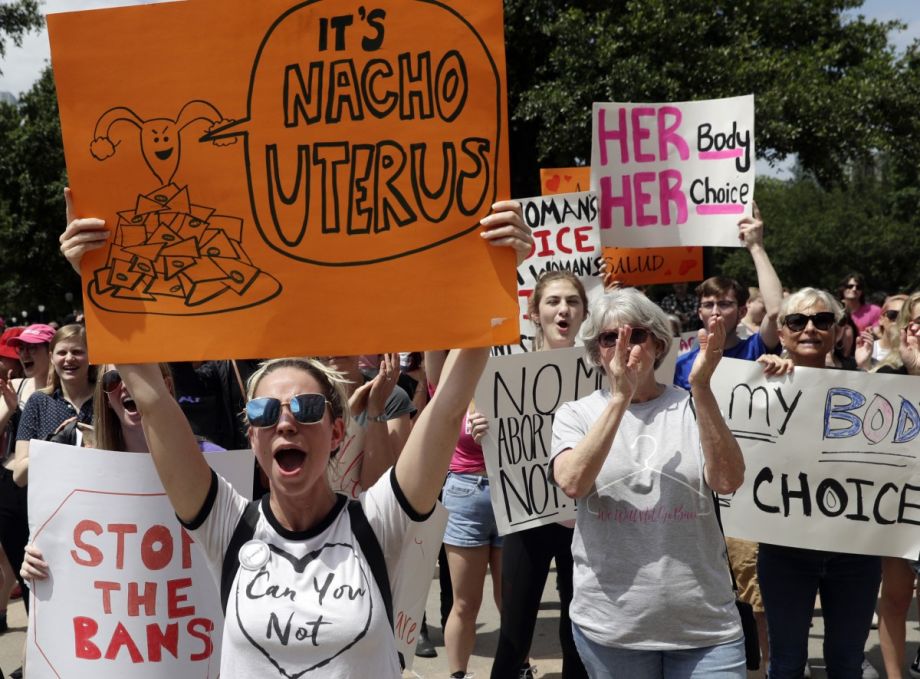 A group gathers to protest abortion restrictions at the State Capitol in Austin, Texas, Tuesday, May 21, 2019. (AP Photo/Eric Gay)

During her first campaign for a southeastern Austin City Council district, Delia Garza knew she faced challenges. “It’s 70 percent Hispanic and families live on half the income as the rest of the city,” Garza who is now mayor pro tem, says. “I was committed to improving the quality of life here.”

She also learned her district has the highest percentage of teenage pregnancies in the district. Improving quality of life meant integrating public health initiatives into her agenda.

As the council ramps up discussions this summer ahead of finalizing their 2020 budget, representatives from three organizations approached her and other councilmembers with another idea: Fund abortion access.

The three groups –– NARAL Pro Choice Texas, one of the state’s largest advocacy organizations for reproductive healthcare, the Lilith Fund and Fund Texas Choice, which fund ancillary expenses for women seeking abortions –– requested a portion of the city’s $4.2 billion budget for funding logistical access to abortions.

Garza was on board.

Councilmembers were already discussing ways to respond to recent state bans on abortion after 8 weeks. In the past, councilmembers have boycotted city-funded travel to those states, she was concerned with its impact on the tourism industry, which employs working families.

This response falls in line with her values –– and campaign promises.

“Addressing an issue like abortion access is part of what I have backed in the past –– addressing issues of health equity proactively,” she says.

If approved on Tuesday, $150,000 of the $4.2 billion budget will be allocated to the city’s public health department to fund expenses such as travel, childcare and lodging for Austinites seeking abortions.

“Texas has been at the forefront of the abortion rights fight. The state doesn’t allow private insurance to fund procedures,” says Delma Limones, NARAL Texas’ communications manager, and the federal Hyde Amendment bans federal funding for abortion. That means a patient could pay anywhere from $400 to $850 out of pocket, according to Jane’s Due Process, a legal nonprofit. After House Bill 2 — the massive bill restricting abortions which catapulted former state Sen. Wendy Davis to fame for her filibuster of it — went into effect in 2013, abortion access became even more crucial across the state.

The bill banned abortions after 20 weeks except for a very narrow exemption if a woman’s health is in danger, requires a patient undergo an ultrasound and wait 24 hours before going through the procedure.

That means taking time off work, finding childcare and paying to travel. While some clinics in Austin still provide abortions, many women travel hundreds of miles, and even out of state, to get the procedure.

“With the new restrictions, the need has increased, as have the number of funds,” Limones says. “With this funding, the city is providing practical support by lifting the barriers currently in place.”

If approved, Austin will be the first city in Texas to provide financial assistance for abortion logistics, and the second in the nation. Earlier this summer New York City allocated $250,000 to help women from in and out of state seek abortion care.

At the federal level, the Hyde Amendment bars any federal dollars from going to abortions.

New York state law allows cities to use state and local funds to cover the procedure. Texas, however, does not. A new state law, in fact, bans municipal contracts with abortion providers. The law, SB 22, authored by Sen. Donna Campbell, a Republican, specifically targeted Austin’s $1 lease to a Planned Parenthood clinic — which does not perform abortions. The city extended Planned Parenthood’s lease to 2039 before SB 22 went into effect.

“Proactive” is a term reproductive health advocates use to describe their momentum at the state and local level. Advocates like Jenny Mistry, the associate director of local advocacy at the National Institute for Reproductive Health. The New York nonprofit works with states and cities to promote reproductive rights. Her organization works with officials and organizations like the Local Progress Network comprised of municipal elected officials on progressive municipal policies.

The common misperception among even among those who support reproductive rights is cities do not have a role in the debate. Cities still have plenty of opportunities to put the state and federal government on defense; they have just taken longer.

“People are not thinking about local public funding. It just doesn’t come to mind. People in cities may know about a federal barrier but not know about local opportunities.”

St. Louis’ 15th Ward Alderwoman Megan Green, who serves on the Local Progress board with Garza, thinks a lot about those opportunities.

She successfully added language to the city’s nondiscrimination ordinance preventing employers and landlords from discriminating against a woman for having an abortion or using contraceptives, or for for making any reproductive health decision.

It was so contentious that then-Gov. Eric Greitens, a Republican, called a special legislative session to overturn it. He failed, but a court ruled the language did not allow for religious protections. The language remains, but an exemption protecting those with sincerely held religious religious beliefs gutted it.

Advocates nationwide have had other successes, including upholding laws creating so-called “buffer zones” around clinics providing abortions. After some challenges, Green says, eight feet is the magic, or constitutional number, between anti-abortion protestors and patients entering clinics.

She supports the First Amendment, “but there are limits when you’re blocking access to care.”

“Cities have failed to look at abortion rights as a local issue,” she says. “St. Louis has one of the highest maternal mortality rates in the country because of a lack of prenatal care, especially among poor women and women of color. With the proliferation of crisis pregnancy centers preying on them, our ability to regulate them impacts maternal mortality.”

Such crisis pregnancy centers are backed by religious groups opposing abortion. While proponents include them as part of their religious witness — a way to stop abortions and provide alternatives — opponents call them deceptive because they seek to dissuade women from the surgery and do not provide unbiased counseling. Cities like San Francisco requires crisis centers visibly post they do not provide abortions or contraception.

“Issues on the legality or morality of abortion are dramatically beyond my pay grade as a mayor,” Buttigieg said of his veto. “I don’t think it would be responsible to situate two groups, literally right next to each other, in a neighborhood, that have diametrically opposed views on the most divisive social issue of our time.”

Buttigieg is now a leading contender for the Democratic nomination for president.

Andy Hogue, the communications director for the Travis County Republican Party, says it flies in the face of his and his party’s values.

“As Republicans we are steadfastly opposed to the taking of innocent life inside the womb. While it may seem on the surface that the Council’s goal is to increase access to abortion-related services in opposition to new state restrictions, the effect of it will be to accelerate the number of abortions,” he says.

The $150,000 could be placed elsewhere, he added, to alleviate traffic and lower property taxes.

“Austinites are leaving by the droves for the suburbs, where women’s clinics are few and far between — if the city wants to increase ‘access’ to them then they perhaps should start finding ways to reduce the tax burden for the average Austin resident who wishes to stay in the urban core,” he adds.

“As Austin struggles with housing affordability, exacerbated by high property taxes and fueling an explosive homeless crisis, now would be a good time for the city to focus on core city services rather than playing politics by throwing money at elective surgical procedures,” she says.

Yet, says Limones, “this a health equity issue. Even in liberal Austin, women struggle to access care.”

That’s why integrating reproductive health into the larger dialogue about health equity among communities is crucial, says Green. Closing the gaps in health care among various demographics includes abortion access.

For Mistry, “funding is one of the more important things you can do to support abortion access. We are hoping to help more cities go the way of Austin and New York.”