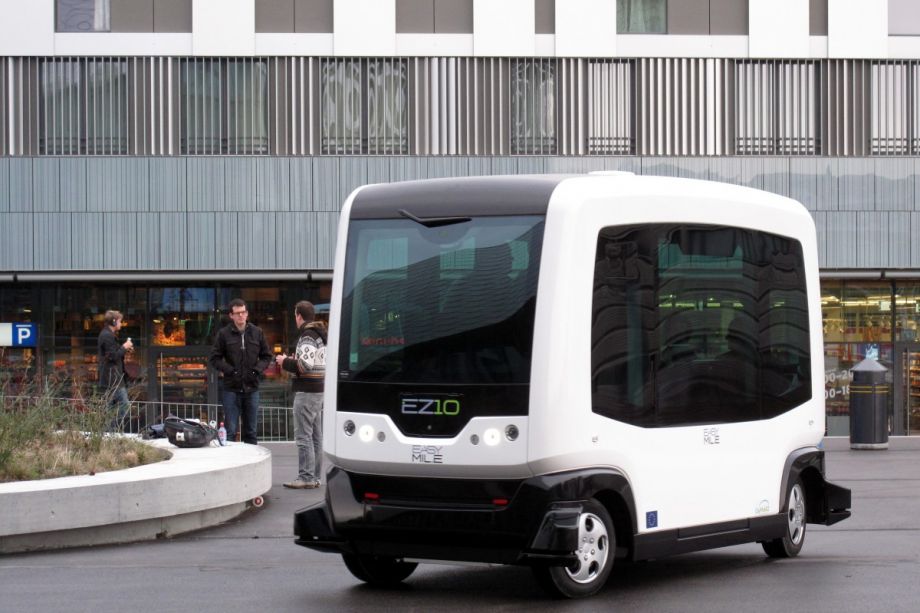 A model of the EZ10 shuttle used in other cities. (Credit: Wikimedia)

Austin is considering a pilot program to run “pod-like” autonomous shuttles through downtown, the Austin American-Statesman reports. Testing of these driverless electric vehicles could start in a month, a press release from Capital Metro, the city’s transit agency, said.

“Capital Metro wants to lead the charge — to be among the first transit agencies in the United States to showcase this technology to our ‘smart’ city. I believe this will be the largest public AV bus pilot in the country.” said Randy Clarke, Capital Metro’s President/CEO, in a statement.

The first phase of testing will “evaluate the performance of different autonomous bus vehicles from a few manufacturers,” the release said. Capital Metro will then select one manufacturer to lease six vehicles for an in-service pilot, in which autonomous electric vehicles — supported by a human operator — will pick up and drop off people for 12 months. Riders won’t pay any fees during the pilot; RATP Dev, a France-based global transportation provider, is picking up the tab.

Capital Metro, RATP Dev and the University of Texas-Austin trialed an autonomous shuttle, the EZ10, made by French manufacturer EasyMile, during SXSW 2017. At the time, Cap Metro told the Austin American-Statesman that it had no plans to purchase any of the vehicles.

The EZ10 has been trialed at small scales in other cities around the U.S. as well, including an office park outside of San Francisco and a stretch of road in Denver. Minneapolis held a short pilot for the shuttles on the city’s Midtown Greenway bike trail earlier this year. In a news release at the time, the Minnesota Department of Transportation (MnDOT) said that these vehicles have the potential to reduce crashes by minimizing human factors during driving. The shuttles typically travel no faster than 12mph (but can reach up to 25mph), according to a press release from Hennepin County, which partnered with MnDOT on the trial.

Capital Metro says the agency will test vehicles from multiple manufacturers, but also includes a description of “the vehicles” that matches that of the EZ10. EasyMile’s website says that the EZ10 is fully electric, carries up to 15 passengers, and has an “in-built access ramp for mobility challenged passengers.” It is unclear which other manufacturers, if any, will be testing their vehicles on Austin streets, but a presentation given to the Capital Metro board included a photo of a shuttle from Navya, another France-based company that operates autonomous shuttles and cabs around the world, the Statesman said. A Navya spokesman told the Statesman that he wasn’t aware that the company had any agreements to operate in Texas.

In Austin, the route for the shuttles is still being determined, but officials foresee a premapped plan that serves City Hall, the Central Library and at least one MetroRail station, according to the press release. Cap Metro officials are planning for five- to seven-minute headways.