Austin Is Working on Its Love-Hate Relationship With Live Music 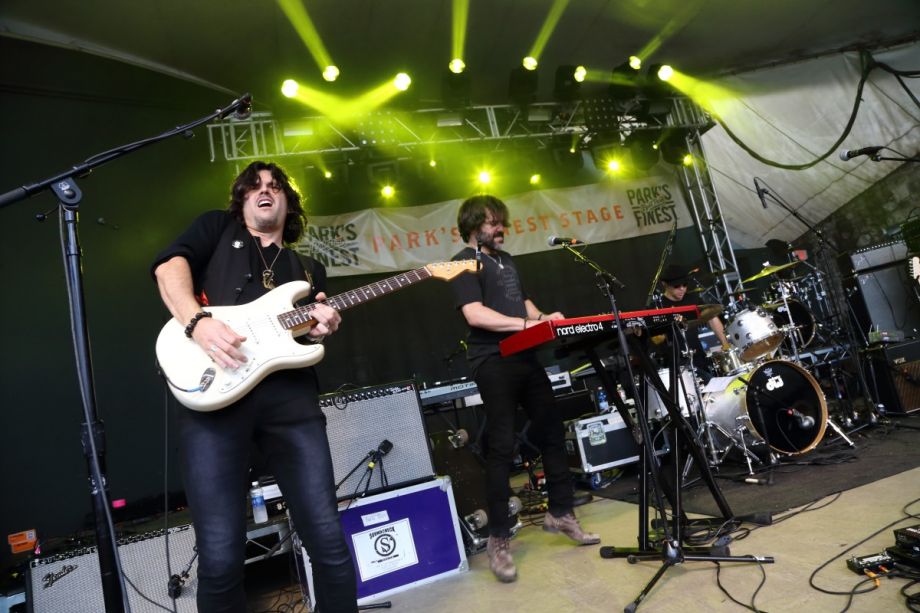 John Cusimano and The Cringe performs during the 2014 SXSW festival at Stubb’s BBQ in Austin. (Photo by John Davisson/Invision/AP)

Austin’s claim to “Live Music Capital of the World” might be hyperbolic, but the city is saturated with concert venues and clubs. The concentration of those businesses downtown is part of what makes South by Southwest feel like an intimate, walkable event.

Music is important to the city’s economic health — estimates value the Austin music industry at $1.6 billion — and vital to its identity. On any night in Austin, just about every establishment from a big concert venue to a corner dive bar will be hosting a band. The city government even has a music and entertainment division.

Like many U.S. cities, Austin made a deliberate attempt to draw more residents to its core — pushing incentives for developers and more. Today more than 10,000 people live downtown, compared with 4,000 in 2000. But with that boom, music became more than a claim to fame; it became a sticking point. More specifically, sound seeping out of concerts and into homes, condos and hotel rooms was annoying people populating the neighborhoods near all those clubs.

Soon after the W Austin Hotel and Residences opened in 2010, “we started getting clobbered with residents complaining about noise,” says Don Pitts, the city’s music program manager.

With the downtown population expected to double by 2040, the problem wasn’t going to be solved with earplugs. The city decided to intervene, creating the Music Venue Assistance (MVA) Program, which offers low-interest loans to venues for customized soundproofing. After a successful 2012 case study at one club, the MVA Program was enacted in August 2013.

“We’d been trying to get venues to do something [that would reduce noise] every year,” explains Pitts, “but when you do sound mitigation gradually, it’s not as impactful on the listener.” The MVA Program allows a venue to make one significant investment in soundproofing, offers an interest rate below 1 percent and gives the club up to three years to repay the loan. So far three venues have taken advantage of the MVA Program, with the loans ranging from $22,000 to $35,000.

Stubb’s Bar-B-Q, a famed Austin venue with an outdoor concert area where Lady Gaga performed at SXSW in 2014, is one establishment that revamped its sound system through an MVA Program loan.

“We haven’t had a lot of noise complaints,” says Ryan Garrett, the club’s general manager, but oddly the complaints they did receive tended to come from a growing residential neighborhood about two miles north of the club. “I feel adamantly that Stubb’s isn’t a nuisance to that area,” Garrett says, and he’s made a point of supplying his cell phone number to the residents and walking the neighborhood while Stubb’s concerts are in progress. Nonetheless, the club’s sound system was altered “as a measure of good faith to those who complain we’re part of the problem.” The new state-of-the-art speakers are now mounted on a pulley system and angled downward into the crowd. The change has actually improved the concertgoing experience.

Pitts says the city decided to create the program because “we can add 20 more pages to the sound ordinance, but that’s not going to solve the problem.” Solutions, he knew, “were going to cost money.”

The individual soundproofing efforts appear to be successful. After participating in the MVA Program’s pilot phase, Cedar Street Courtyard saw a 90 percent drop in its number of noise complaints. Pitts notes that four or five more loans are “in the pipeline,” but he concedes that his office hasn’t done enough to encourage participation since the program’s enactment a year and a half ago.

Charlie Betts, executive director of the Downtown Austin Alliance, a coalition of property owners and businesses, says the organization’s aim is to continue to build a more dense downtown. “We hear about [sound complaints] through the hotels and apartment towers,” he explains, such as incidents when visitors ask hotels for refunds because vibrating windows kept them awake. Betts emphasizes, though, that “our goals are the same as the city’s. People are attracted to living downtown, and one reason is the live music scene.”

Pitts says that his office plans to focus on getting more clubs to take out MVA Program loans, and he’s been contacted by officials from San Francisco.

“Austin’s Music Venue Assistance Program helps venue owners strengthen their businesses in order to avoid future conflicts,” Benjamin Van Houten, business development manager for San Francisco’s Nightlife and Entertainment Sector, writes in an email. “We’re looking at it as an important model as we help entertainment venues access our small business loan programs to achieve this same goal.” The Bay Area city is even looking at pre-empting problems with legislation recently introduced that would provide an opportunity for developers and nearby venues to meet in a hearing before the city’s entertainment commission and require new residents to receive notice that they’re moving near an entertainment venue.

But while increased venue participation will help, it won’t eliminate the tension between Austin’s live music identity and its push for downtown density. When asked if he sees residential growth affecting the music scene, Garrett quickly responds, “I do. And it’s not just for the live music venues.” He gives the example of the sound ordinance’s rule that on Wednesdays, outdoor music must cease at 10:30 p.m. This applies to bars with patios, which are “a big thing in Austin.” He notes the perception that establishments are getting ticketed if any sort of music is coming from the speakers, even if no residents have lodged complaints, and he says this never would have happened just a year or two ago.

Pitts knows that negotiating between clubs and residents is going to remain tricky: “To solve sound problems, especially in an urban core, you’re going to have the fight over who was here first.”

For his part, Garrett is worried that stepped-up enforcement and proposed changes to the sound ordinance regarding how noise levels are measured would be a deterrent to major acts wanting to play a downtown outdoor venue such as Stubb’s. That would affect ticket sales, hotel occupancy rates and Austin’s reputation. “Our positive impact on the community,” Garrett says of the music industry, “far outweighs these occasional flare-ups.”