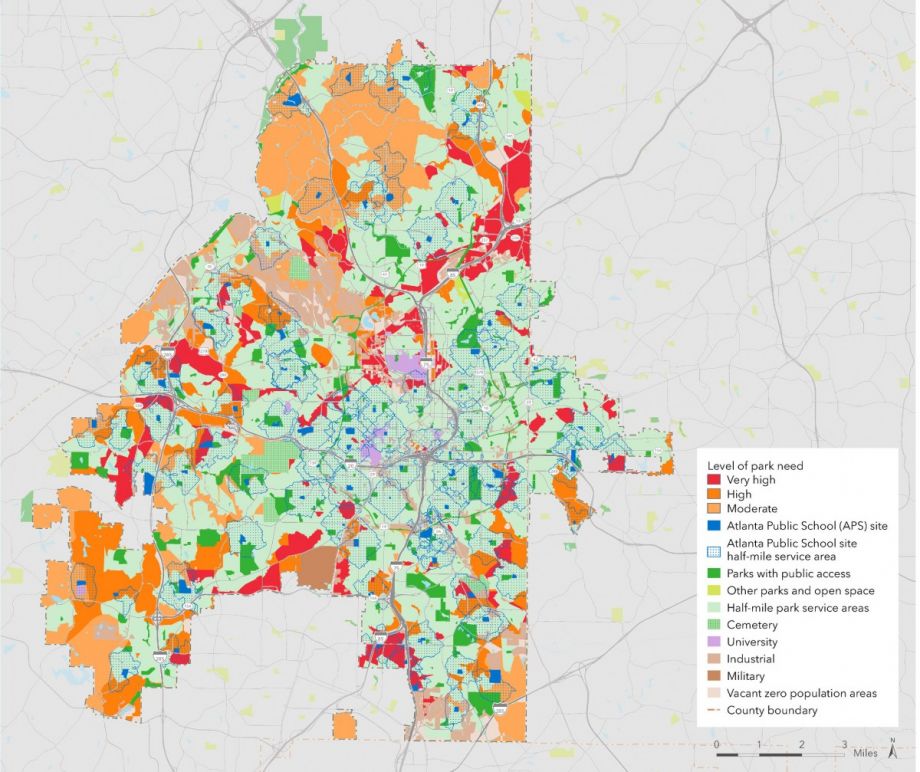 Atlanta is proud of its trees. As of 2014, the city has 47 percent tree coverage, among the highest of major cities.

But Atlanta lacks public green space. Just under 6 percent of the city’s land is parks, and the city ranks 43rd among the nation’s 100 largest cities for its ParkScore, which measures how well cities meet the need for parks, according to the Trust for Public Land.

“Despite the fact that we’re the city in the forest and a very lush, green city, most of that lush greenness is privately held,” says Michael Halicki, executive director of Park Pride, a nonprofit to improve Atlanta parks. He says a third of Atlantans have to walk more than 10 minutes to reach a park.

But a new pilot hopes to change this with a straightforward idea: Opening schools’ green space to the public outside of school hours. Atlanta Public Schools is the largest land and property owner in the city, so there’s a lot of potential green space to be had.

“One of the highest costs for creating a park is land acquisition, and so here you have land that’s already owned by the public,” says George Dusenbury, Georgia state director at the Trust for Public Land. “It just doesn’t make sense — as we continue to get denser and the demand for green space increases — for land that is held by the public not to be available for more than one use.”

The Trust for Public Land, Park Pride, the city of Atlanta, Atlanta Public Schools and the Urban Land Institute Atlanta are working together on this pilot to open up schools as neighborhood green space. The public can use the space when schools are closed — after hours, on weekends and during the summer. But the pilot does more than unlock the gates. Based on ideas from the school communities and surrounding neighborhoods, each schoolyard will get an as-yet-unspecified upgrade.

In order to locate schools that would have the greatest effect on green space accessibility, the Trust for Public Land mapped out people who could walk to a school but not a park within 10 minutes. It then ranked the schools with the highest numbers of these populations, particularly in lower-income neighborhoods.

Earlier this year, Atlanta Public Schools invited 17 of these institutions to participate in the pilot that will open these schoolyards as after-hours parks. Ten schools expressed interest in being part of the pilot, spanning neighborhoods all around Atlanta.

“Everything we do, we look through an equity lens,” she says. “We like to offer opportunities to all our [schools], but we do have a special lens about maybe the schools in areas that need more resources that don’t usually have the opportunity to seize them.”

The first three pilot schools will be announced in May. Halicki says the schools will be in different geographic areas and have students from different income levels, since the pilot should be a learning opportunity.

After it chooses the three initial schools, Park Pride will further evaluate each site this summer. In the fall, it will hold meetings with the schools, students and surrounding communities about what they want to see in the spaces and how they want to use them.

“There might be ideas that go beyond our price tag, but that could actually be something that is actually written up and documented that gives people an idea of what the community liked and what they would like to see,” Halicki says.

Construction will happen in summer 2020, and the first three schoolyards will open that fall. All 10 schools will open to the public within three years.

For each school that opens to the public, the Trust for Public Land has committed to offering $150,000 of support in order to improve the playlots.

“We’re hoping that with this program and with generous philanthropy and external funding, we can maybe enhance some of the schoolyards, so whether that’s new playgrounds or upgrades or trails or things that maybe our general fund doesn’t cover or at least is not on the docket for renovation,” Sprecher of Atlanta Public Schools says. “We are hoping that these partners can bring some of those resources that can go towards those enhancements and then that will be more attractive and compelling to get the community to use the parks.”

What will be done to improve the parks will depend on community and school input, Sprecher says. But potential projects include an adaptive playground accessible to people with physical disabilities, walking trails, new playgrounds or learning gardens.

Park access is an equity issue, says Sharon Danks, founder and CEO of Green Schoolyards America, a national organization to make schoolyards more natural. Green spaces and parks tend to be in higher-income neighborhoods, so making sure schoolyards are accessible and green can help.

She says all school districts should do the type of work that the initiative in Atlanta will do.

“If we can green schoolyards across the city, then we are democratizing access to greenspace,” Danks says.

The Trust for Public Land has helped convert more than 200 schoolyards around the U.S. to be after-hours parks, including in Oakland, California, where it partners with Green Schoolyards America. If the Atlanta pilot succeeds, Dusenbury wants to replicate it in other Georgia cities. It would likely focus on the four other cities that have joined the organization’s national campaign to place parks within a 10-minute walk: Brookhaven, Clarkston, Decatur and Macon. All but Macon are in metro Atlanta.

Opening schools as green space can affect communities that are park deserts. Halicki says this creates parks for kids who live near a particular school but don’t go there or who don’t have space nearby in the summer.

It could also strengthen the ties between a community and its school. Halicki says perhaps neighbors will even pitch in to clean those schoolyards because it’s no longer just their local school — it’s their local park.

“We spend an awful lot of money on schools, including people who don’t have kids going to those schools,” he says. “This is a way that they actually wind up both getting some use out of those spaces but also a connection with those different schools as an anchor within their community.”

EDITOR’S NOTE: We’ve clarified where the money for improving the playlots will come from.