Young Atlantans Get a Jump-Start to Tech Jobs – Next City

Young Atlantans Get a Jump-Start to Tech Jobs 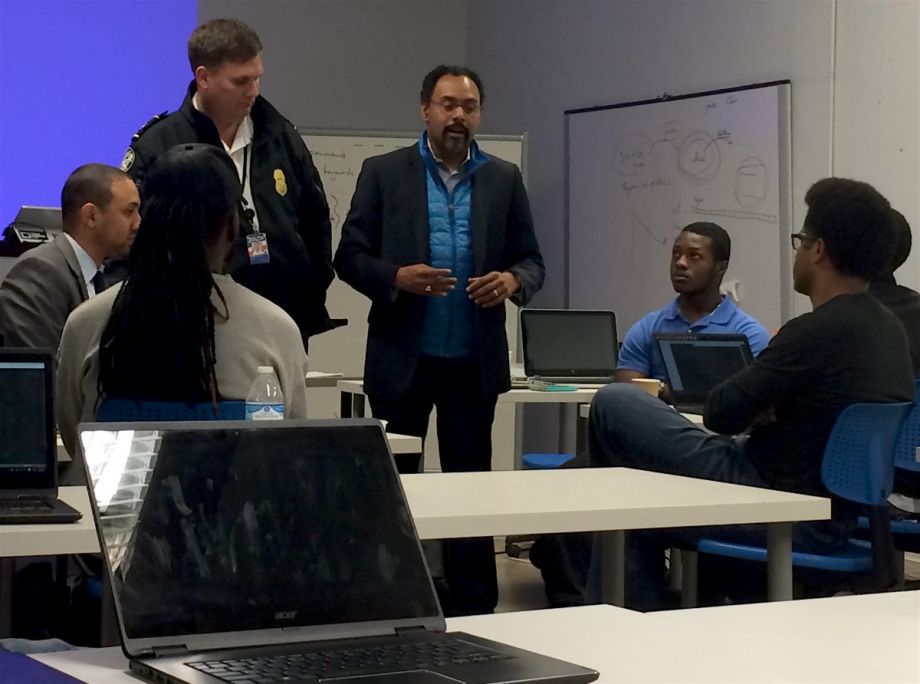 Tech entrepreneur Rodney Sampson launched Code Start because, he says, “We believe we can disrupt poverty and our country’s racial wealth gap by providing communities of color and underrepresented communities access to innovation, entrepreneurship and investment.”

Rodney Sampson is a successful, black serial tech entrepreneur. He’s built four companies from the ground up, and written four books. He’s also branded as the first black co-founder of a high-growth tech startup — but he wants company.

Partnering with the city of Atlanta’s Workforce Development Agency, Sampson launched Code Start earlier this year for young people between 18 and 24 who have a high school education but no college degree. He hopes the yearlong training program will turn the first class into aspiring entrepreneurs, engineers and developers, through classes on coding and Java, career readiness, and entrepreneurship. Participants also meet with software developers, through company tours, to talk about working in the tech industry.

“We’re taking people from underserved communities and backgrounds and giving them the skills and the tools to actually become upwardly mobile software developers,” Sampson says.

Participants are housed and receive monthly stipends. (Funding comes from a $250,000 grant from Workforce Development and donations.) They’ve been labeled as “disconnected youth,” and the program’s goal is to support them at a crucial stage in development of their young adult lives, in which some are neglected and others succeed.

According to the Social Science Research Council, 34 percent of adults in Atlanta have at least a bachelor’s degree, higher than the national average of 28 percent. Yet Atlanta has the fourth-highest high school dropout rate after Los Angeles and Miami, at more than 1 in 4 young people ages 16 to 24. Atlanta’s black youth are even more likely to struggle. The proportion of employed African-American men between 16 and 24 to the total population in that age range is about 22 percentage points lower than that for all young men.

More unemployed youth means a higher risk of the next generation being caught in the same cycle Sampson hopes to break.

“We believe we can disrupt poverty and our country’s racial wealth gap by providing communities of color and underrepresented communities access to innovation, entrepreneurship and investment,” he says.

Code Start students will get guidance Sampson never had, from instructors and mentors in the tech industry. Because the program is so new — Sampson labels it a “minimum viable product” — they’re still shaping what it will look like in the future. They’re still raising money (cost per student is about $50,000) and looking for corporations that, says Sampson, “want to fund the program, offer paid internships, hire our students.”

Jeff Nelson, a Code Start instructor who runs a data analytics software company called Cinchapi, doesn’t believe his students are at a disadvantage just because they don’t have college degrees, but they still need to level out the playing field.

“Coding is one of the unique professions that you don’t need a four-year college education for,” he says. “These students aren’t necessarily disadvantaged if they can be equipped with the knowledge and the ability to think a certain way. If they can get that experience and build things, that will put them on equal footing with someone that got a master’s in [computer science] from Stanford.”

With only a few months of training under their belts, five students have already started careers as entry-level developers at Atlanta’s Emory University.

Nelson believes coding helps them do that.

When Katiana Stephens heard about Code Start, she had attended two colleges, but didn’t feel she was on the right career path. Having rediscovered an interest in technology, she applied to the program and got accepted. Now, she wants to finish her bachelor’s degree and start a software company.

In a few weeks, Code Start students will begin the entrepreneurial phase of training (which will involve ideation, design thinking and business models). Many students are being exposed to these concepts for the first time.

Student Corey Shaw says Code Start is helping him build connections he never thought he could have in an industry he never knew he’d be interested in. “I’m understanding how the tech world works and I’m starting from scratch,” he says. “I’m learning how to just get my foot in the door.”

Still, working in the tech industry as a minority can be daunting so Nelson intends to offer support long after the program’s end.

“They might ask, ‘How do I navigate this professional tech scene where I am underrepresented?’” he says. “I don’t want to stop talking to these students once the program ends. I want this to be the start of a lifelong partnership. I work with them or I mentor them or I help get them different opportunities, that’s what it’s really about for me.”