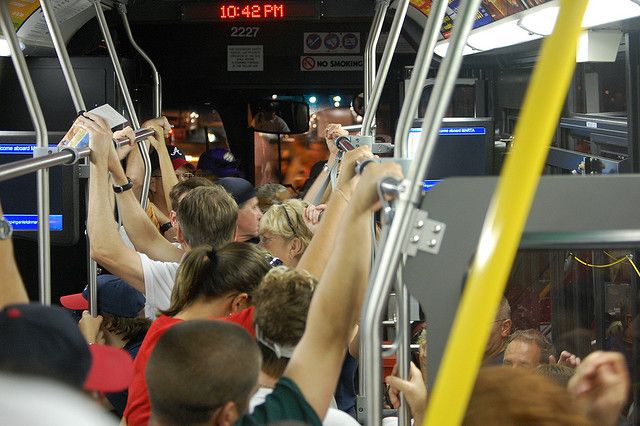 The Metropolitan Atlanta Rapid Transit Authority, or MARTA, was one of the few public transit agencies in the country to lose riders last year, the Atlanta Journal-Constitution reports.

Citing numbers from the American Public Transit Association (APTA), the Journal-Constitution notes that despite increased transit ridership across the U.S. — it rose by about 1.5 percent nationwide in 2012 — MARTA saw its rate drop by nearly 4.75 percent. Since 2001, Atlanta trains have lost 15 percent of their passengers, while buses have lost 31 percent.

The news comes at a time when public transit use is hitting record highs elsewhere. Nationally, 10.5 billion trips were taken last year, the second highest annual ridership rate since 1957, according to APTA. Cities from Seattle to Nashville to St. Petersburg, Fla. set ridership records in 2012. Per the Journal-Constitution, Chicago and Boston each saw a 2.5 percent increase in straphangers, while Cleveland had gains of 4.3 percent. Dallas saw a whopping 10.3 percent increase in public transit commuters.

Yet Atlanta (and, to a lesser extent, Philadelphia) saw ridership tick the other way. Why?

Last fall a study from researchers at the University of California, Berkeley found that commuters tend to care more about unreliable service than commute length, crowdedness or seat availability when choosing whether to take public transit. Furthermore, riders are less likely to give up on transit when delays aren’t perceived to be at the fault of the system — that is, commuters will forgive delays due to emergencies more so than they will delays due equipment problems.

When the Journal-Constitution takes to the streets for a small and informal poll of how Atlantans feel, the responses generally line up with these findings. Those who returned to their cars cited reasons of “schedules becoming less reliable, long wait times, safety concerns and rude patrons or staff.”

Officials place the blame on a still-struggling economy, calling it a “perfect storm” of “two recessions, which leave people without jobs to travel to, three fare increases, a short-lived expansion, service cuts and rising capital-improvement costs for an aging system.” Indeed, cost issues have led to breakdowns and missed schedules.

It’s a shame, though, that system maintenance hasn’t been more of a priority. Should MARTA start functioning more efficiently, it could help commuters on notoriously congested Atlanta highways gain some of their lost time back. As detailed in the Texas A&M Transportation Institute’s 2012 Annual Urban Mobility Report, congestion has worsened in the last three decades, costing the average commuter about extra 38 hours behind the wheel in 2011 (that’s up from 15.5 hours in 1982). The average Atlanta commuter had it even worse: 51 hours spent crawling behind the next car’s bumper.

During the same period, the collective hours saved from taking public transit have more than doubled.

Though HOV lanes have cut back on travel times more and more since having becoming widespread in the mid-1980s, they still lag behind public transit productivity-wise, saving car commuters less than half than that of their counterparts on transit.

The realization in 2011 that fewer people have moved to Atlanta than previously though spurred a renewed effort at curbing sprawl and promoting smart growth in the region, as Thomas Wheatley reported in a June Forefront story. But last summer voters rejected a one-cent sales tax that would have put more than $7 billion toward roads and transit, including light rail and MARTA, in the Atlanta area. And it looks like another stab at a transportation funding plan will not be on the legislative agenda this year.

So MARTA riders should expect those delays to continue.