Are Georgia Republicans Learning to Love the MARTA Train? – Next City

Are Georgia Republicans Learning to Love the MARTA Train? 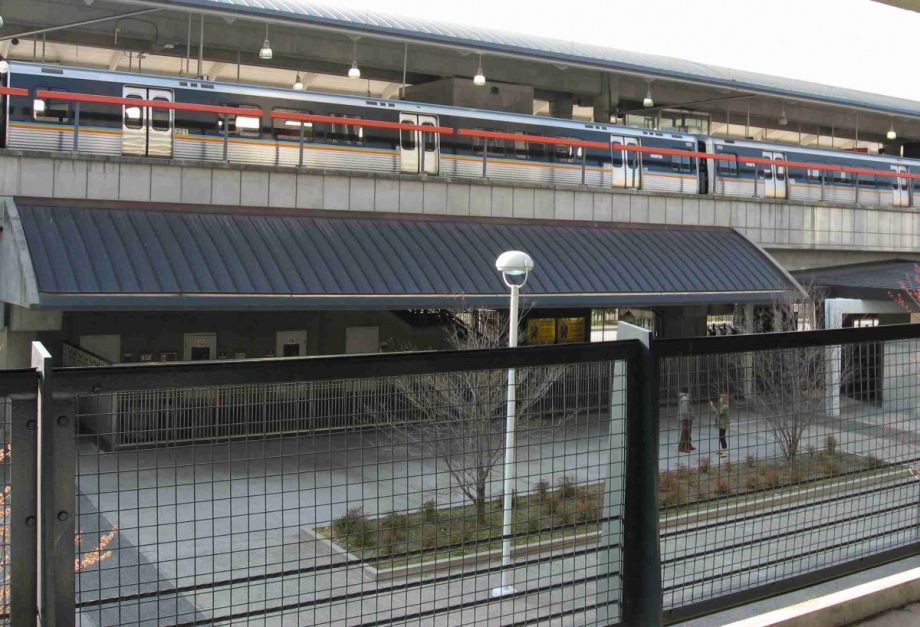 “Shortly after the opening of the North Springs station, we began to see a lot more support.” (Photo by Biomedeng)

We’ve said it before: On the national level, Republicans tend to have a complex and chilly relationship with public transit. But in city and even state bodies, the freeway-loving attitudes of yore are starting to give way, and one fascinating example of this shift — along with its constraints — comes from Sandy Springs, north of Atlanta.

According to census data, the city houses about 94,000 people. But that’s only at night.

“We double in size during the day,” says Rusty Paul, Sandy Springs’ mayor.

The suburb is quickly becoming a corporate mecca: Cox Communications, Rubbermaid, UPS and First Data have all set up shop there. In February, Mercedes Benz USA announced plans to do the same.

Paul attributes the area’s draw partly to the MARTA train, which extends from the very northern tip of Clayton County through the city and up into Sandy Springs. Likely, he’s right. In February, Mercedes USA CEO Steve Cannon told the Atlanta Journal Constitution that the HQ would “help the company tap into the millennial talent who want to live in town, while also being close to executive-level housing in Buckhead and the northern Atlanta suburbs.”

Which is why Paul, a Republican, former Georgia state senator and previous chairman of the Georgia Republican Party is also something of a transit advocate. Currently, he’s supporting MARTA’s proposed expansion to the northern end of Fulton County. That project, which could take rail or BRT form, is still in the early stages of environmental review, with several meetings taking place this month. But should an extension go forward, it would send MARTA north for the first time since 2000. The transit authority is considering several other expansions as well.

If you’ve followed red-leaning, transit-forward leaders in Arizona, Utah and Massachusetts, Paul’s pro-train stance might not surprise you. But this is Georgia, where the suburb/city, right/left, road/transit battles of the last 30 years have been very clear cut. As I covered more thoroughly here, MARTA’s expansion has long been stymied by a toxic combination of white flight, racial fear, failed suburban tax proposals and bright red legislative sessions that favor freeways over rail.

But that could be starting to change — and not just in Sandy Springs. Although Fulton County is already a tax-paying member of MARTA, expanding north of the train’s final stop hasn’t always seemed like a possibility. It’s low density, fed by SR 400. And the northern region is far redder than Atlanta, to the south. Janide Sidifall, a MARTA project planner, says that before the line to Sandy Springs began running, forecasts for ridership farther north didn’t justify an expansion.

“Now north Fulton is one of the biggest employment centers in the region,” says Mark Eatman, also an agency project planner. “Shortly after the opening of the North Springs station, we began to see a lot more support.”

And Paul says that even as high up as the legislature, he’s seeing his party’s transportation priorities shift. He points to the state’s last session, when right-leaning officials voiced transit-funding goals.

“That is a shift in thinking and I applaud it,” he says. “I was maybe the first Republican to say it out loud, but many of us have been thinking it for a while. Roads and cars, in and of themselves, cannot move the enormous number of people who have to be moved, so how do we do it efficiently so we can continue to grow economically?”

Still, Brionte McCorkle, a spokesperson for the Atlanta area’s Sierra Club, says that although those voiced commitments are important, she doesn’t yet see funding strategies to match. And the north Fulton expansion could suffer as a result, she says.

“We’re always in support of regional transit expansion — it’s great, but when is it going to happen?” she asks.

“We really think it could have had a lot more in it for transit,” she says, adding that the Sierra Club spent last session advocating a constitutional amendment that would allow state roadway funds to finance transit. So far, they haven’t been successful, and McCorkle says that as is, dedicated transit funds needs to serve 128 systems statewide.

“All of them splitting that money is not ideal,” she says.

But Paul doesn’t seem to share her concerns, and he’s optimistic about a MARTA expansion.

“I’m a refugee from the legislature,” he says. “I say give me all you can and give me the flexibility to innovate, and I’ll just keep on slicing off the salami until we get there.”