Historic Preservation Is One of Many Hurdles in Atlanta BeltLine Project 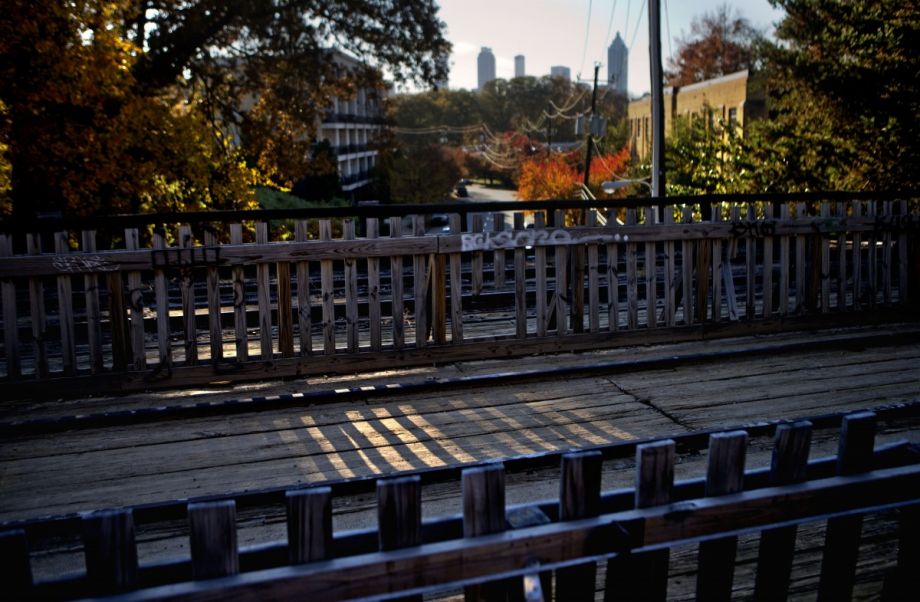 In mid-March, 20 or so Atlantans gathered for “The NOT Atlanta Beltline, Inc. SW Beltline Tour.” Chad Carlson, a historic preservation advocate and resident of southwest Atlanta’s Westview neighborhood, spearheaded the decidedly unofficial walking tour. He led the group through his neighborhood, paralleling the under-construction Atlanta BeltLine, and shared the history of the old railway tracks along which the new multiuse trail is being built, and of buildings on the route.

“I’ve been very interested in the history of my neighborhood. The BeltLine has been such an exciting project, I thought it would be fun and informative for people if they got the perspective of someone who’s not affiliated with the BeltLine,” he explains. Atlanta BeltLine, Inc. (ABI) is managing the ambitious makeover that’s slated to bring miles of trail, parks and transit connectivity, and its sister nonprofit Atlanta BeltLine Partnership offers a variety of its own tours.

Carlson thinks the historic buildings, bridges and other markers that still stand will draw people to the BeltLine when the project is complete, and he worries that ABI is doing too little in the way of preservation along the loop.

“My big interest is to retain the distinct character of our community so we’re not looking like every other part of the BeltLine,” he says. “People want historic preservation because it provides a sense of place.”

The massive redevelopment project runs along a 22-mile former rail corridor that circles Atlanta’s inner core. The BeltLine loop will feature walking and bike trails, and connect to an “emerald necklace” of parks. Long-term, the plan is to build a streetcar line through the loop as well. Several sections of trail have already been completed, and the project has spurred significant development investment along the route (which has, in turn, prompted worries about displacement of longtime residents). Carlson says he is a “huge proponent” of the project, even with his concerns about losing pieces of history.

Atlanta BeltLine, Inc. says it’s doing as much as it can.

“Historic preservation is one of the pillars of our overall design objective,” says Fred Yalouris, ABI director of design. “At the same time we’ve got to be practical and rational at the point something is not working out, either because a building or bridge is structurally unsound or it is in the way of the right-of-way.”

Carlson points to several sites in his neighborhood that have already been torn down for construction or new development such as a railroad trestle bridge from 1919 that ran over MLK Drive. He fought at public meetings to save at least a piece of the bridge as public art, but did not succeed.

Yalouris says they’ve managed to save or restore several railroad bridges along the beltway, but it’s “case by case. Some bridges are just structurally unsound and there’s no way they can be rescued.”

Carlson had a similar struggle with his efforts to save a 100-year-old whistle post marker for the Western and Atlantic Railroad that marked the spot a train conductor needed to blow his whistle for an upcoming street crossing. Carlson made several requests at public meetings for ABI to store the marker during construction, then put it back. Instead, it got knocked down in a pile of construction debris.

“If that was done by our contractor, he did it in violation of our direction,” Yalouris says. “I’ll follow up with the project manager on that.”

The protocol is supposed to be that pieces of railroad infrastructure that have to come out during construction are stored in ABI facilities and reused if possible. Yalouris says, for example, they gave railroad artifacts to sculptors to create art pieces along the BeltLine.

In the northern section of the BeltLine overlay district, Carlson and others successfully argued against the demolition of the futuristic-looking, mid-century Trust Company of Georgia bank building. It was going to be replaced with a self-storage facility, but thanks to public testimony, the BeltLine Design Review Committee recommended rejection of the storage plans and that the bank site be considered for historic landmark status.

“Had 30 people not showed up at the BeltLine board meeting and demand they save it, if the media hadn’t been aware of it, we would’ve been stuck with a storage unit,” Carlson says.

Now his goal is to try and preserve as much of the Old Atlanta State Farmers Market as possible. The Market is, in fact, listed as a potential historic resource in the BeltLine Master Plan. But redevelopment is underway and one building has already been demolished. Still, Carlson is hopeful developers will incorporate elements of the original market, like they did with the Ponce City Market (a redevelopment that preserved the massive, brick Sears building-turned government offices).

The BeltLine Master Plan recognizes that, “conservation of historic resources is vital to preserve memories of the past, protect landmark structures for the economic value, and maintain the buildings and places that have defined and will continue to define the unique character of the neighborhoods.” Developers can get significant tax credits if they preserve historic registry sites.

ABI is looking at preserving several buildings. But, says Yalouris, “let me tell you, there are a lot of buildings on that [Old Atlanta State Farmers Market] property that are totally worthless and have been messed around with for years. It’s a question of what is historically intact or not. There are a number of buildings I would love to see restored, but it will cost a lot of money.”

Carlson thinks preserving sites like the Market will ultimately be to ABI’s advantage. “People want authenticity. They want something that creates a sense of place and tells a story. … The BeltLine has to create destination points, otherwise people are going to be less inclined to use it,” he says. Carlson plans to continue trying to raise awareness about the sites in his neighborhood he thinks should be saved. “From my perspective, ABI’s been very on time and on budget with the construction. To me it’s more important getting it right than getting it fast.”