For Obama, A Renewed Focus on Urbancentric Topics – Next City

For Obama, A Renewed Focus on Urbancentric Topics 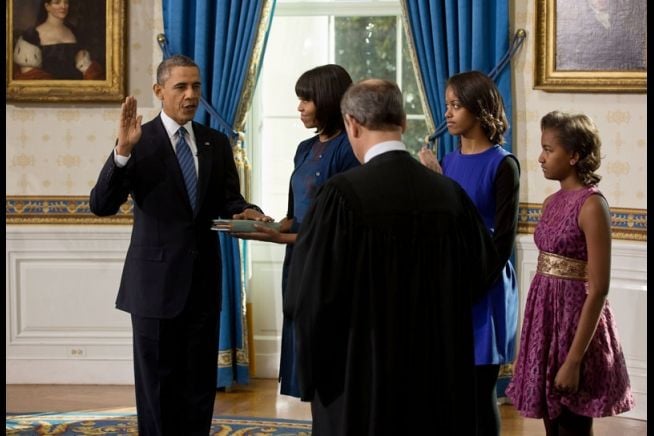 President Obama was sworn in to his second term yesterday. Credit: The White House-

One should never expect to glean much policy insight from inauguration speeches, but President Obama indicated today that his administration will seek to take action on climate change and immigration as it moves into its second term. And as always, cities will be the proving grounds for how future policies affecting these issues play out.

During this morning’s inauguration ceremony, Obama touched upon several domestic topics — including investments into sustainable industries — that should have urbanists and urban dwellers perking up their ears.

Though light on specifics, the issues spotlighted today will likely set at least part of the executive agenda for the next four years.

Perhaps due to the immediacy of Hurricane Sandy, Obama dedicated a significant portion of his speech to environmental policy. New York City, incidentally, was well represented at the ceremony, though the superstorm exposed vulnerable infrastructures in many cities and metro areas.

“Some may still deny the overwhelming judgment of science, but none can avoid the devastating impact of raging fires, and crippling drought, and more powerful storms,” Obama said in a clear reference to Sandy and other recent environmental disasters.

“The path towards sustainable energy sources will be long and sometimes difficult,” the president continued. “But America cannot resist this transition; we must lead it. We cannot cede to other nations the technology that will power new jobs and new industries — we must claim its promise.”

That last sentence also carries echoes of the pledge, frequent during last year’s presidential campaign, to try to bring outsourced jobs back to U.S. soil.

In a much more direct way than at the last inauguration, Obama took a pro-immigration stance, casting it as a workforce development issue.

“Our journey is not complete until we find a better way to welcome the striving, hopeful immigrants who still see America as a land of opportunity,” he said, “until bright young students and engineers are enlisted in our workforce rather than expelled from our country.” This comes as Obama prepares to push Congress to overhaul the immigration system and help some 11 million undocumented people gain citizenship, the New York Times reported this month.

It bears mentioning, however, that as of last summer the Obama administration had deported undocumented immigrants at rate 1.5 times faster than former President George W. Bush, according to the Washington Post.

Just prior to the immigration comment, Obama even threw in a sentence about voting rights — an issue that some, including this writer, would argue disproportionately affects poorer people in cities — when he said, “Our journey is not complete until no citizen is forced to wait for hours to exercise the right to vote.”

Again, the occasion didn’t call for the president to go into specific policy proposals. An inauguration speech isn’t the venue for that. But that doesn’t mean what we heard today won’t account for tangible results down the line. When he first took office back in 2009, Obama hinted at future plans meant to both spur economic growth and restore infrastructure, factors that work in tandem.

“The state of our economy calls for action: Bold and swift,” he said at the time. “And we will act not only to create new jobs but to lay a new foundation for growth. We will build the roads and bridges, the electric grids and digital lines that feed our commerce and bind us together.”

This sentiment would manifest in, among other things, such first-term urban policy achievements as the Partnership for Sustainable Communities, the Neighborhood Revitalization Initiative, the Strong Cities, Strong Communities program and the Choice Neighborhoods program.

In both direct and indirect ways, these policies helped cities weather the recession and set a path to recovery. It will be interesting to see what becomes of the president’s words this time around.