New Website Maps a Growing Water Threat in the U.S. – Next City

New Website Maps a Growing Water Threat in the U.S. 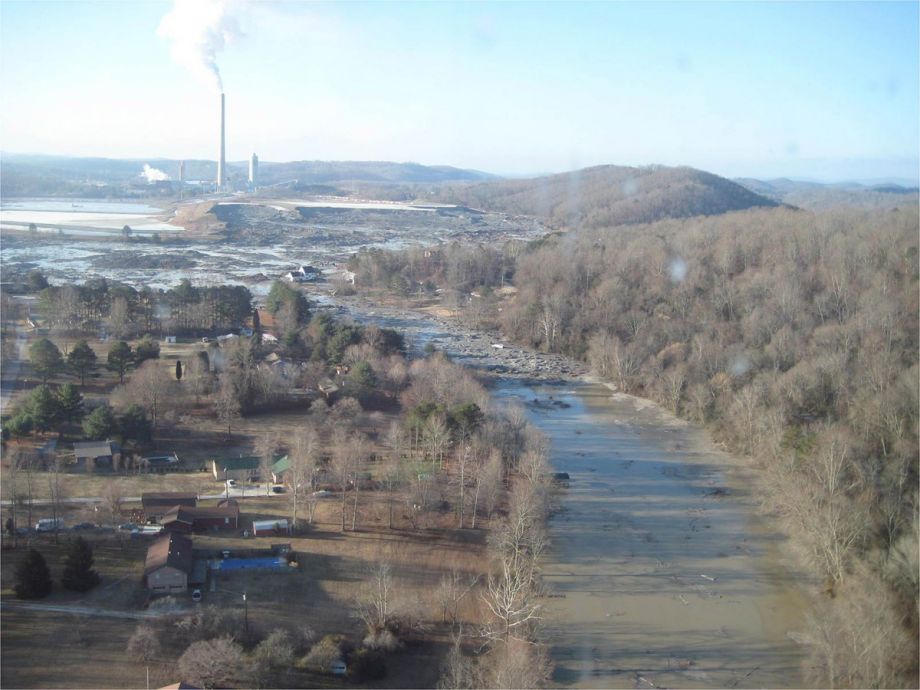 Every now and then, a disaster strikes and makes something that was previously invisible all too terribly visible. Such was the case with the coal-ash spill in Roane County, Tennessee.

On December 22, 2008, a dike containing the waste product from the Kingston Fossil Plant failed, releasing 5.4 million cubic yards of coal ash and slurry. The spill fouled both the Emory and Clinch rivers nearby, and eventually covered about 300 acres. The cleanup, which is still ongoing, will end up costing about $1.2 billion.

The horrific Kingston spill briefly put coal ash in the headlines. In the years since, however (with a couple of exceptions such as North Carolina’s recent 39,000-ton Dan River spill), the question of what happens to the tons of waste produced by the nation’s coal plants has slipped once again into the background.

But the coal waste piles up, and as a new website from the Environmental Integrity Project (EIP) makes clear, that can cause problems even when catastrophic failures don’t happen. The site, Ashtracker, maps groundwater contamination data from facilities around the nation where the waste from coal-fired power plants is stored — coal ash, scrubber sludge and similar products.

What it shows is disturbing. In the period since 2010, the levels of one or more toxic pollutants in 82 percent of currently listed groundwater wells exceeded federal standards for safe drinking water.

“Groundwater near unlined coal-ash impoundments and coal-ash landfill is usually contaminated,” says Abel Russ, an attorney with the EIP. The contaminants include “a whole suite of chemicals” including several neurotoxins, carcinogens and elements that affect fetal development, says Russ, who used to be a toxicologist. Among the most common are boron, sulfate, manganese, cobalt and arsenic. And while there are federal standards for each one of these chemicals, their combined effect is so far unknown. “No one quantifies the cumulative risk,” says Russ.

Awareness of the coal-ash problem is rising. The Environmental Protection Agency is in the process of finalizing its first-ever rules about coal-ash disposal, a move that came only in response to a lawsuit filed by environmental groups, public health advocates and a Native American tribe. Many activists around the country, saying the regulation is long overdue, are hoping for strict regulation of the substance as hazardous waste.

So far, the Ashtracker site lists data from just 30 of the hundreds of waste dumps. Compiling the information from the state agencies that collect it, and then rendering it into an easily understandable format, is incredibly time-consuming and labor-intensive. EIP hopes to have more than 200 sites mapped by the end of 2015.

There are coal-waste storage facilities around the country, with especially heavy concentrations in the Southeast and the upper Midwest, says Russ. Looking at any one of them, you see what Russ means about contamination. At the Allen Fossil Plant near Memphis, all four of the wells on-site report levels of toxins in excess of federal safe drinking water standards, with arsenic, borium and manganese topping the list. At the Big Bend Station, just south of Tampa, Florida, 40 of 44 wells show excessive levels of toxins, with unsafe levels of arsenic, radium, molybdenum and beryllium.

Many of these contaminants degrade slowly. Depending on the topography of the individual site, they could be migrating slowly into private well-water supplies nearby, or into lakes and rivers that serve as sources for public drinking water, causing headaches and costs for water utilities downstream.

Gathering the data for a project such as Ashtracker is complicated by the myriad different rules governing coal-ash storage in different states around the country. And when states make data available, it is usually in forms that are difficult to digest. That’s the idea behind the mapping project. “The big goal for us is transparency,” says Russ, who says that people interested in the details about individual facilities might want to contact the organization to get walked through the data further.

Russ says that what’s frightening about the coal-ash problem is that its scope is unknown. No one is really sure what will happen as the facilities age and the contaminants travel through the groundwater system into the wider environment. What’s clear is that the water near the dumpsites is already badly polluted. “They’re basically creating these sacrifice zones,” he says, “where no one will ever want to live.”