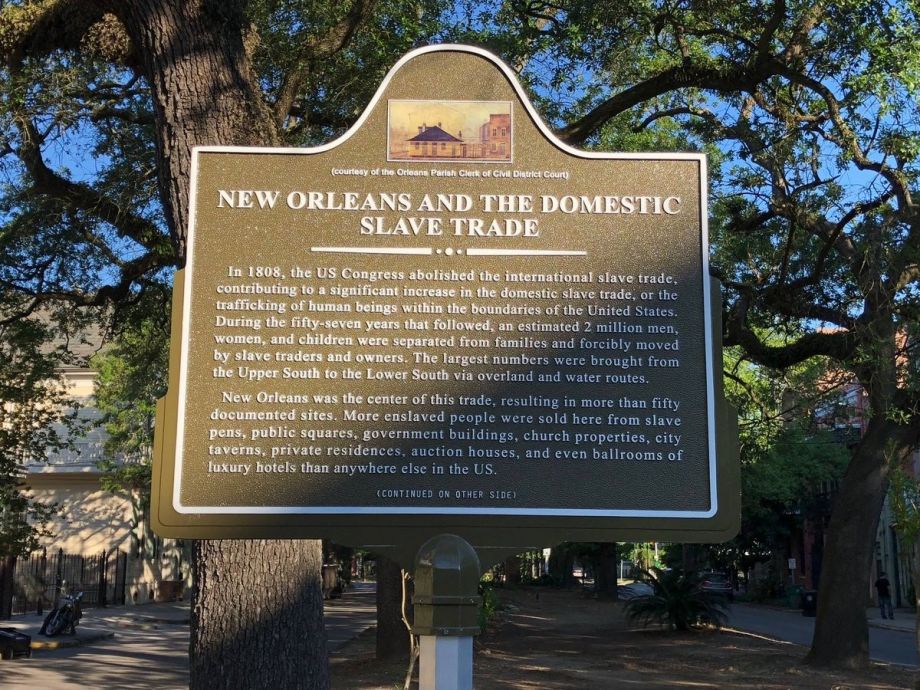 The transatlantic slave trade —and New Orleans’ shameful history in the buying and selling of human beings — will be memorialized with the erection of markers throughout the city.

The New Orleans Advocate reports that the New Orleans Committee to Erect Historic Markers on the Slave Trade has already erected two plaques, one at the riverfront promenade known as the Moonwalk and another at the intersection of Esplanade Avenue and Chartres Street. Both are inside the French Quarter, the city’s main tourist district.

Though New Orleans was the site of the largest slave market in the Deep South, very little of its dark history has been preserved or remarked on. When New Orleans mayor Mitch Landrieu, in the wake of the white-supremacist rally in Charlottesville, called on New Orleans to remove its Confederate statues, one of the most shocking aspects of his speech was the public acknowledgement that slavery happened at all, Dartmouth College historian and native New Orleanian Rashauna Johnson told the Chronicle of Higher Education last year.

But between 1804 and 1862, more than 100,000 people were bought and sold in New Orleans, University of Alabama professor Joshua Rothman told the Advocate. Families were torn apart; one third of the sales were of children younger than 13, the Times-Picayune wrote.

Until the addition of the new plaques, one of the only places in downtown New Orleans acknowledging the city’s slave-trading past was a marker is Congo Square, where enslaved people were allowed to drum and dance on Sundays. “Only in New Orleans could the paradigmatic site of slavery be a party,” Johnson wrote in Slavery’s Metropolis, her 2016 book on slavery in New Orleans.

The markers are a step in that direction, historians say, providing a historical perspective not only on New Orleans’ role in slave trading but on the indelible contributions made to the city by enslaved people. Luther Gray, who helped put up the first two markers, told the Advocate: “I think it’s going to be a major starting point.”

That already seems to be the case. In addition to the two markers placed by the first committee, another group, the New Orleans Slave Trade Marker and App Project, plans to erect six markers at places where slaves were traded, although the locations have not yet been announced. The group is part of the city’s Tricentennial Commission, which is officially celebrating the city’s 300th birthday this year.

Two markers will be placed in the Central Business District, three in the French Quarter, and one in Faubourg Marigny, marking properties that “have direct links to the slave trade,” Erin Greenwald, a historian on the committee, told the Advocate, even though many of the original buildings at those addresses are gone, replaced over the years with newer construction.

The destruction—physically or metaphorically—of sites with links to the slave trade is not unique to New Orleans, Vicky Gan wrote for CityLab. Richmond, Virginia, turned its slave markets and jails as tobacco warehouses and factories. The slave market in St. Augustine, Florida, still stands, but the marker now reads “Public Market Place.”