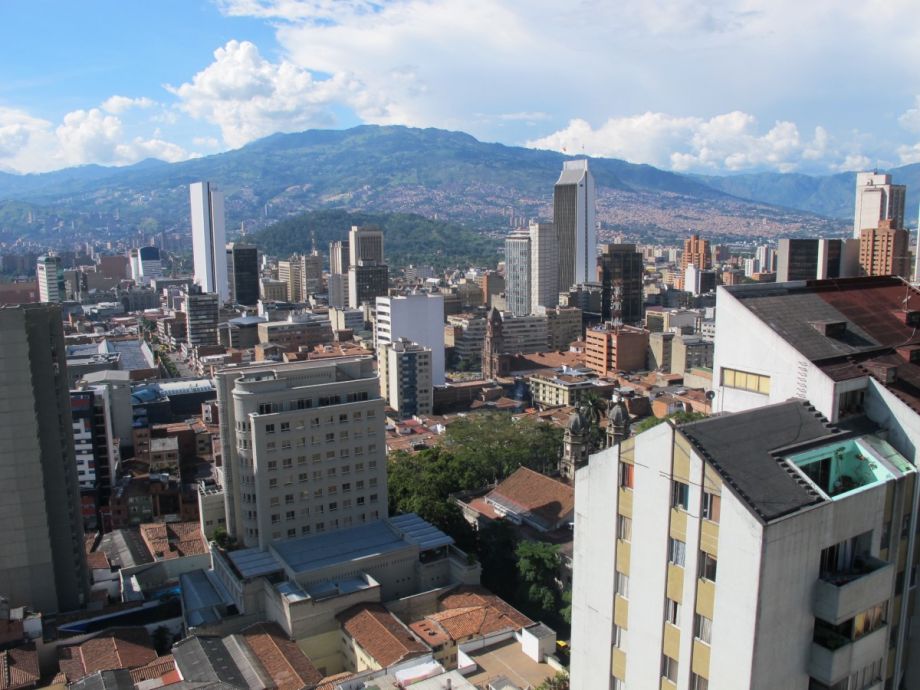 Central Medellín, with the sprawling barrios climbing the hills in the distance. Photo credit: Charles Parkinson

At 79, Luz Posada has lived through Medellín’s most defining modern eras: “La Violencia,” the decade of politically motivated carnage starting in 1948, as well as the brazen years of drug trafficking during the 1980s and ’90s, which culminated in a reign of terror perpetrated by the city’s most famous criminal son, Pablo Escobar. “I remember one night we heard seven bombs go off, boom-boom-boom, all around us in the neighborhoods,” says Posada, gesturing from her 13th-story apartment window towards the houses on the surrounding hills.

“This was all grass,” she says of the valley’s slopes. “But with La Violencia people started moving up there – displaced people. And with the last period of violence (during the ’80s and ’90s) this filled up.”

Medellín’s history is soaked in blood, and the drugs and crime that engulfed the city in darker decades still haunt its poorest sections today. But while it continues to face many challenges, Medellín’s resurgence since the early 1990s, when it was the murder capital of the world, has been one of the more unlikely success stories in recent urbanism, driven in part by the city’s groundbreaking approaches to creating urban resilience.

Key to Medellín’s rise has been its pioneering “social urbanism,” in which investment in public infrastructure like libraries and parks is combined with institution building and better infrastructure, like public transport, all targeted toward improving life for people in the city’s neediest areas. Its visionary gondola cable car system has provided access to – and reduced violence in – some of the most isolated and impoverished neighborhoods, while the award-winning Biblioteca España, a massive library and education center opened in 2007, has become an icon of both the city landscape and the global social urbanism movement. Exclusion and lack of education are at the heart of many of Medellín’s problems, and social urbanism has proven that city design can turn the tide on both of them.

But for all its progress, Medellín has a long way to go. It remains among the 25 most violent cities in the world, with a homicide rate approximately three times that of Bogota’s and more than five times the global average. For Max Yuri Gil, Director of Corporación Región, an NGO which promotes human rights and social inclusion, the city’s historical and continuing violence is a critical obstacle to overcoming many of its quandaries.

“It’s a city deeply divided,” says Gil, “split between young and old, men and women, gay and straight, rich and poor.” According to Gil, inequality, social division and violence combine to prevent people from uniting to confront the problems the city faces. “There is a deficit in what is needed to construct a modern, respectful mentality, which is required for democracy,” he says. “We have come a long way, but there is still a lot of work to do.”

Amenities like the Biblioteca España have been credited with helping to drive down crime. Photo credit: Daniel Echeverri via Flickr

As Medellín has made strides in the battle against its criminal element, other resilience challenges have emerged. With nine cities clustered around it, Medellín sits at the heart of a metropolitan area of 3.5 million people – a population that’s more than tripled in the last 50 years. The city is divided into 16 districts known as comunas, centered on the downtown area, which the city’s elite migrated away from during the 1930s and ’40s, leaving a trail of attractive architecture in their wake. Much of that architecture has fallen into disrepair, while, simultaneously, the city’s poor majority has been swelled by almost half a century of guerrilla and paramilitary violence in the countryside, sprawling up the surrounding mountains in a patchwork of improvised housing. It’s an impressive sight when descending into the city by road, but the unchecked expansion has created environmental pressures. Flooding and landslides have affected the city in recent years, with dozens killed as a result of downpours in 2010 and 2011.

As the city has ballooned, its sprawling development has only worsened these floods, with the many tributaries that lead into the River Medellín, which bisects the city, increasingly encroached upon. “These are high gradient streams which rise very quickly during downpours,” says meteorologist Orlando Lemus, from the Medellín branch of the country’s Instituto de Hidrología, Meteorología y Estudios Ambientales (Institute of Hydrology, Meteorology and Environmental Studies – IDEAM). He says garbage from the settlements is dumped in the streams, creating severe overflows during heavy rains. “And we must reforest the areas around the streams to strengthen them as much as we can.”

Known as the “city of eternal spring” for its consistently sunny weather, it is not uncommon to hear a Medellín native – known as a “paisa” – say that the days of endless sunshine are gone, that the two annual rainy periods have grown longer, and that 15 or 20 years ago it really was perfect. The perception is a combination of both genuine shifts in weather patterns and the tendency for people to rose-tint the past, explains Lemus. “The dry periods are dryer and the rainy periods are wetter,” he says. “But statistically this change is not as accentuated as peoples’ perceptions might make it.”

Perception is something Luz Posada is also keen to address. She knows that many residents in the wealthy southern neighborhoods see downtown Medellín as polluted, dangerous and best avoided. But she knows her city is transforming – she’s seen the changes with her own eyes. “They don’t know the center,” she says. “It’s very pleasant and has many wonderful people.”