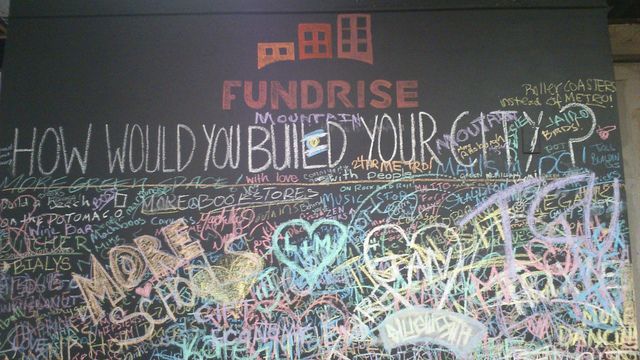 Fundrise is all over the news these days. The D.C.-based real estate crowdfunding site, which made our Disruption Index last year and whose co-founder, Daniel Miller, is a member of Next City’s 2013 Vanguard, is ruffling the feathers of the financial services industry and stirring up debate in the blogosphere.

Fundrise is essentially a Kickstarter for local real estate projects. Except instead of getting a first pressing of a band’s vinyl or an autographed t-shirt when you donate, you become a part owner — the percentage depends on your investment — in a local business. You’re playing a small part in the development of your neighborhood and, if all goes as planned, yielding a financial return.

“Inherently creative projects are tougher,” Miller said at a Vanguard panel in Cleveland last week. “People are investing for return but also values. Someone could make 8 percent a year, so a decent return, but also you have an impact on your community. People will make money but people have this view, with venture capital, that you are going to make 100 times your investment. This is a different idea. You will make a return but on a different scale.”

If wealthy musicians can ask for cash to help fund their tour on Kickstarter, why can’t locals throw $100 or even $10,000 into the pot for a new real estate project down the street?

“I think it’s a really clever model,” said Patrick Sabol, a senior policy and research assistant at the Brookings Institution’s Metropolitan Policy Program and another member of the 2013 Vanguard class. “It’s innovative and it’s new, which is nice, but doesn’t necessarily mean that it’s going to fix everything.”

Fixing everything. I can’t think of a tool that would, but Sabol raises a valuable question: Will Fundrise be another relatively niche online connector, or will it truly change the game?

To do that, it will have to move beyond bringing together 100 neighbors to fund a ramen joint on the corner. It will have to grow up. The plan for doing that? Crowdfunding transit infrastructure.

“If the 2nd avenue subway was being funded by 100,000 people it would be done by now,” Miller said, talking about the subway line now under construction on the far East Side of Manhattan.

If Fundrise wants to expand to infrastructure, the start-up should look at London’s Spacehive for clues. It’s a similar model — crowdsourcing for the neighborhood — but for civic projects. People pitch ideas and then work in concert with local governments. You could pitch in $50 or $5,000. In some ways, it speeds up the process to spruce up the neighborhood. The cash flow comes from multiple sources: Private investors, individuals, philanthropic sources and government funding. It’s a group effort.

According to Center for an Urban Future and NYU Wagner’s Innovation and the City report, “Spacehive is closely attuned to the complexities of planning and capital funding. Project risk management, contract frameworks and funding verification are all built in to the platform, and no project advances without required planning and regulatory permissions.”

My concern with Fundrise is accountability. What happens if you invest, say, $943 in a new mixed-use project down the street, and the final product is some gross eyesore? Or worse yet, nothing even gets built?

Though each developer will come up with project-based terms for each investment deal, the entire model is predicated to a very large degree on trust and shared social capital. These projects — whether it’s a coffee shop or a community center — are essentially for the neighborhood, by the neighborhood. “The public transparency will be its governance.” Miller said.

I asked Sabol if this neighborhood trust and accountability model is scalable. “I do think it is scalable,” he said. “I don’t know how much that runs you into more difficulty or uncertainty with the SEC, just because I think right now it’s probably something that the SEC sees as a cute, new idea. I don’t know how it scales up when the SEC starts putting a lot more scrutiny into these kinds of small equity investments.”

“Because you have all these people who have a monetary stake in it, they’re able to more effectively advocate for that locality,” Sabol explained, “whether that’s writing their council member to make sure that the zoning is going through and doesn’t get held up in some way, or making sure that the developer is accountable because you’re going to have a bunch of angry constituents calling if they’re running drastically overbudget.”

“[This] kind of group responsibility and accountability that happens when you open these markets up to a larger diversity of people,” he went on. “I think that accountability and responsiveness is really the core of what makes Fundrise an interesting model. I think their incentives are very aligned to do this the right way. I’m sure those guys are up every night concerned that one of these projects will fall through, because that destroys their entire trust business model.”

Fundrise is in the early stages of development, but it shows great potential as a tool to allow more people to directly participate in community development. If we can scratch together enough cash, we can save this building. They’re buying the lot, not just standing yelling about what’s gone sour in the city.

Still to be determined: Who will participate? Will people who don’t have extra dough lying around to invest in some wacky Internet scheme simply be further alienated by the development of gentrifying neighborhoods? Will we get way too many places for a trendy night out while there is nowhere to buy a carton of eggs?

What happens if the platform expands to transit infrastructure? Will it just expose more income inequality as people who have money pitch in to shine up aging infrastructure, while those neighborhoods with less disposable income see their subway stations and bus stops molder?

To be clear, I think Fundrise is a great model for neighborhoods. It keeps assets in the hands of locals and gives people some equity. But it’s running up against the same struggle developers and urbanists grapple with every day — how do we make it work for everyone. How can it be inclusive? Fundrise is a young company. Perhaps it’s ready to tackle the issue and go to the neighborhoods that need it most.