Arts Project Mixes Old and New in Chinatown – Next City 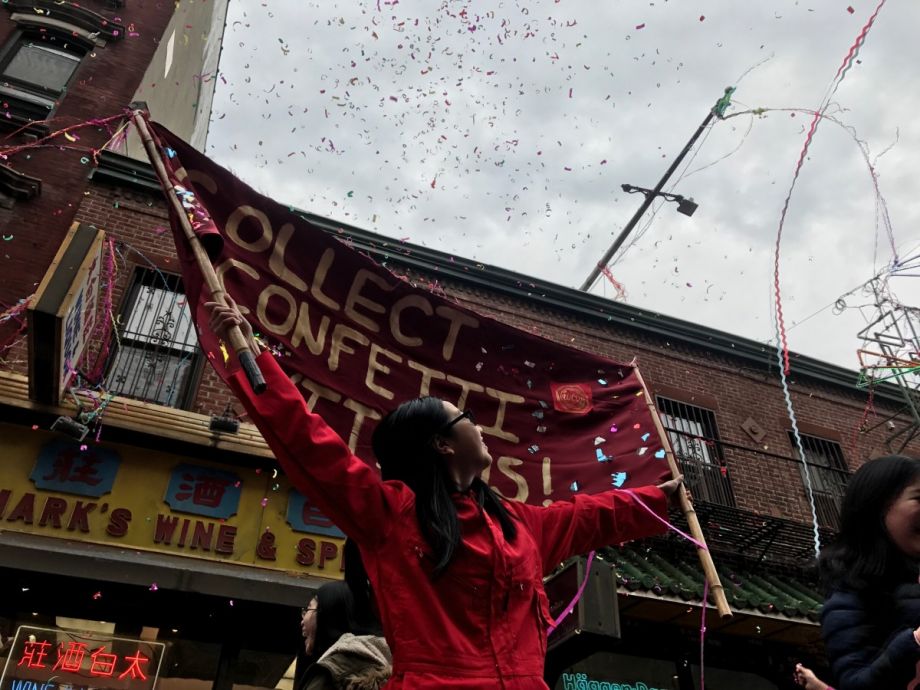 Chinatowns across the United States have always been about mixing the old and the new. Food, language, art, and architecture from the world’s oldest continuously evolving culture mixing with a new country, new cities, and new building codes. Like a real cauldron, sometimes the mixing can get quite heated. Like the cauldrons of myth and folklore, the results can also be magical.

The old: As part of Lunar New Year celebrations, every year Chinese communities all over the world host lion dance parades. In the traditional ritual spread from southern China, believed to ward off evil and bring prosperity, troupes of dancers in a lion costume walk the streets blessing each shop, accompanied by the beating of drums and cymbals and the firing of confetti cannons. It can go on all day, and in a big Chinatown like Manhattan’s, there can be dozens of lions parading the streets.

The new: This year, for the first time, a small “cleanup crew” dressed in bold red jumpsuits walked the same streets as the lion dancers. Carrying butterfly nets, brooms, and dustpans, they invited others to join them in collecting the confetti. Some were confused and wanted to tell them the city has a sanitation department, but most who encountered them were delighted to join — even a few toddlers. Their goal was not to collect all the confetti, but “to raise awareness of the fight against gentrification in Chinatown, through art pieces,” says cleanup crewmember Melody Mok.

Being on the cleanup crew was part of a yearlong arts and community engagement fellowship within the W.O.W Project, a collaborative effort hosted at Wing On Wo, a century-old shop that sells porcelain and other items imported from China. The confetti collection was part material gathering, part marketing for upcoming community workshops. Together with four other fellows, Mok will be leading workshops in which they will invite community members to recycle the confetti into art.

“So much of the conversation around gentrification in Chinatown is around art galleries coming in and taking over,” says Kristin Chang, another of the fellows, who grew up in San Francisco’s Chinatown. “This is a different way of showing how art can come from this community and doesn’t necessarily have to be a displacing force.”

Funded by the Asian Women Giving Circle, the W.O.W. Project is Mei Lum’s way of mixing the old and the new. Her family owns Wing On Wo, as well as the building where it has been since 1925. Her earliest memories of the shop are of coming by after school and heading to the kitchen in the back, where her grandmother would be cooking an after-school snack and her grandfather would be ready to teach her another Cantonese poem. The family very nearly sold the store in 2015, with her grandparents aging and the shop struggling to find its footing in a new era.

Lum had been living abroad for three years, and got the news two weeks before she was set to return to the country for graduate school.

“There was a lot of emotions,” Lum remembers. “I was cautious of jumping up and down mad, since I had been living abroad for three years after graduating from college and so I didn’t have all the information and particulars of what was happening on the ground. It took me a while to understand the situation and also understand my role, and where I was in my life.”

Not long after Lum decided to eschew grad school and take on the family business—including managing the 20 apartments above their shop—Diane Wong strolled into Wing On Wo. A doctoral student at Cornell University, Wong was interviewing people for her research around gentrification of Chinatowns in the U.S. After interviewing Mei and her father, Gary Lum, Wong offered to take Lum with her for the rest of the interviews over the next three months.

“I started piecing together everything about our situation, and was able to zoom out and have a 10,000 foot view of how the erasure of this place could affect the block and the rest of the neighborhood,” Lum says.

Out of those discussions, the W.O.W. Project was born.

“I think it’s a really important project because it’s so place-based and creating meaning for people,” says Wong, who continues to collaborate with Lum on the project. “Chinatown isn’t Chinatown because of the buildings, it’s because of the people. But now people are being forcibly displaced.”

Wong and Lum recently returned to NYC from a tour of West Coast Chinatowns, including Vancouver, Seattle, San Francisco and Los Angeles. They saw how all these Chinatowns are facing so many of the same challenges as in New York City. “The shuttering of small businesses, mass development of luxury towers, hotels, art galleries, displacement of elders …” Lum says.

The W.O.W. Project kicked off with a panel discussion two years ago, featuring second- and third-generation Chinese Americans who chose to either revive their family businesses or start their own businesses in Chinatown. The response was more than Lum expected, inspiring her to work with Wong and a growing number of artist collaborators to produce more programming, including film screenings, artist residencies, and more community discussions. The fellowship, centered on youth and the theme of “Resist, Recycle, Regenerate,” represents a new phase of the work.

“We started to see some of the same people coming, and new people coming, but the extent to which we were able to engage them and bring them in was hard to deepen,” says Lum. “We wanted to see what type of impact we could have on one small group of young people over a long period of time.”

Through a competitive process, the W.O.W. Project selected five inaugural fellows last fall who now meet every Saturday. While all of Chinese descent, each has a completely different story.

A high school student, Mok grew up in Puerto Rico, moving to Brooklyn in 2014. She’s trilingual, and still has family back in San Juan, some of whom still don’t have reliable electricity after Hurricane Maria. Chang’s parents moved to San Francisco from the American south. Jing Chen emigrated from China, and Lily Tang grew up in the neighborhood, which was easy to tell as she had waves of friends joining in on the confetti collection. Both Chen and Tang are also in high school. Ja Bulsombot hails from Chinatown in Bangkok and is currently attending Sarah Lawrence College along with Chang.

“Chinatown really made me feel connected in this country,” says Chen. “I really wanted to engage my community because it helped me a lot and I wanted to give something in return.”

So far, Chang’s favorite part has been spending time with such a diverse bunch. “We started doing presentations on ourselves, getting to know each other and our histories, and our own takes on the project,” she says.

The fellowship itself is another way of mixing the old and the new. All the art within the project is paper-based, meant to help connect to Chinese history and culture. Paper was invented in China, after all.

As the legend goes, thousands of years ago, a man had washed some hemp-based clothing in a basket, and after draining the water and leaving the basket alone, found a layer of hemp fibers had settled along the inside of the basket—the first paper. It’s a story the fellows plan to share with workshop participants as they make paper with them, using some of the recycled confetti they gathered during the lion dance parade.