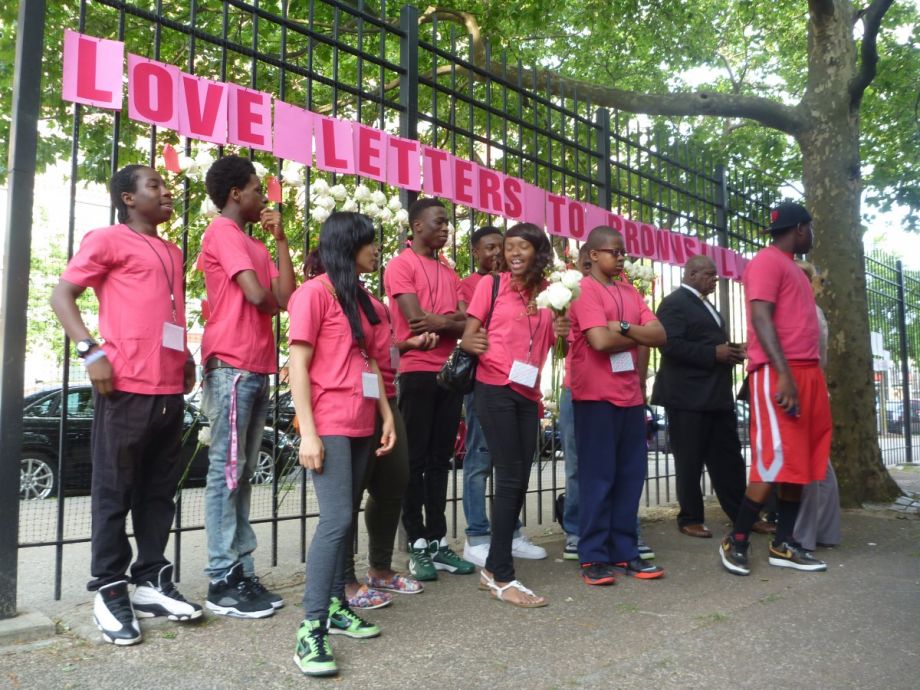 New York and North Carolina are the only two states that arrest and prosecute 16- and 17-year-olds as adults. In New York, this translates into a troubling cradle-to-prison pipeline, and 65 percent of the state’s prisoners come from New York City.

Three years in and case by case, Young New Yorkers is pushing back against this pipeline through arts programming.

In 2012, Australian architect Rachel Barnard created a restorative justice-centered public art project after being awarded the Percival and Naomi Goodman Fellowship from the Columbia University Graduate School of Architecture, Planning and Preservation. Her Brooklyn-based program was designed to give teens who have been prosecuted as adults a creative outlet in which to express their experiences in the criminal justice system. Instead of pleading guilty, performing community service or retaining a criminal record, they have the path of art. With support from Brooklyn Defender Services, Brooklyn Legal Aid, the Brooklyn District Attorney and the Center for Court Innovation, Young New Yorkers became court-mandated.

Last year, the nonprofit added a new program, open to all Brownsville community members, “Transforming Futures: Exploring Empowering Responses to Gun Violence Through Art and Design Thinking.” The curriculum gave 14 young people access to guest artists and materials to produce works for a final exhibition called “Love Letters to Brownsville,” an art installation with themes of trust, love and generosity.

Barnard says that the intention of Young New Yorkers is not to be pedagogical about art, but to really have the program be propelled by the participants themselves.

“It became clear to us that it is a big responsibility to be working with young people. We didn’t want to do a public art project where the creative expression of it was ours, but the message was theirs,” says Barnard. “That struck us as exploitative somehow.”

The program doesn’t necessarily prepare young people for careers in the arts. Only one student has expressed such an interest so far (Barnard says he is one of the most incredible people she’s ever met), but the reality is that he’s not in an economic situation that currently allows him to pursue that dream.

“We’re not about vocational art training,” says Barnard. “We’re really about finding your voice, distinguishing your personal trauma and taking account for your actions. And then using different art mediums as a way of approaching these topics from different angles.”

One of the core programs is a one-day diversion program after which participants’ cases are dismissed and sealed. Another is an eight-week diversion program for teens charged with misdemeanor offenses. Around 75 teens have graduated from these programs since Young New Yorkers began.

The project hasn’t yet been able to create a sustainable fundraising model, but a silent art auction in April went far toward supporting their programs this year. More than 100 well-known artists including Shepard Fairey, Swoon, David Hockney, Chino and more contributed pieces to the event. Street artists, in particular, have been supportive of Young New Yorkers. “There’s an authenticity to it, because they’re giving from the heart,” says Barnard.

Beyond the effect that participation in diversion programs has on the youth themselves, one of the most important goals of the project is to get lawyers, judges, probation officers and others in law enforcement to expand their perspective on these teens.

“Members of the criminal justice system not only get to re-meet the kids beyond their rap sheet,” says Barnard, “but they really get to hear their ideas and have grown-up conversations with the young people in a joyful environment. Somehow the art projects cut out the confrontational aspect.”

One of the projects dearest to her heart was “Fly High.” Saichin, a participant from Brownsville said that in his neighborhood people don’t remember their dreams. He proposed that every year, a group would meet on the Brooklyn Bridge to write down their dreams for the year on paper planes and then throw them off at the same time. She says, “it would create collective memory around remembering your aspirations for the rest of the year.” At the graduation of the workshop series he participated in, his cohort, their friends and relatives and a group of judges, district attorneys, public defenders, relatives gathered to recreate the proposal.

Echoes of that experience reoccur in the graduation of the most recent eight-week diversion program. In “Floating Futures” guests were invited to “float ideas” about how to transform New York’s criminal justice system by writing them down on helium balloons and releasing them in the room.

“We like to call it a transformational justice system,” says Barnard, “because we want to shed light on the system itself.”