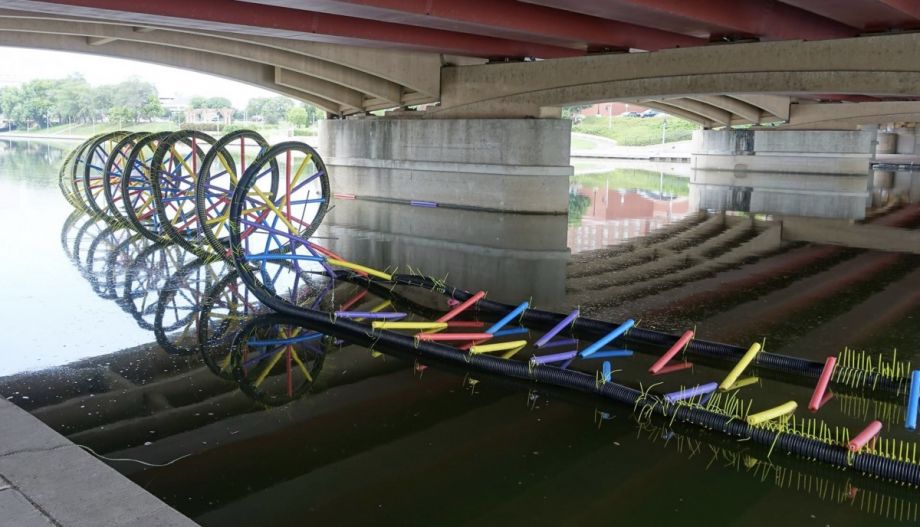 As the 1,500-mile long Arkansas River wends its way southeast through Kansas, it passes right through the heart of downtown Wichita. When it does, it is calm and wide and attractive. There is green space along much of its length through the city and bike paths on each side. There’s also new residential and commercial development. Yet some Wichitans say there’s a key element missing: people.

“It’s the biggest underutilized asset in the city. … For this being the centerpiece of the city, there’s next to no activity. You see a couple kayakers, but otherwise there’s nothing,” says Ty Tabing, a native Wichitan who recently returned home after spending most of his career working on economic development projects in Chicago.

Tabing’s solution is “ArkArt,” a series of artist installations on the river that he hopes will draw curious visitors and inspire conversation about new ways the city might use the waterway and riverfront.

The first installation, “DNA,” is a 100-foot-long, 10-foot-tall floating piece that looks like a twisting chain of DNA. Two Wichita artists, Mike Miller and Marc Durfee, built it to illustrate “the symbiotic relationship between humans and water,” Tabing explains.

“DNA” hit the water in August. It will remain there until Thanksgiving. So far, Tabing thinks ArkArt is having the intended impact.

“The reaction has been very positive. For example, the city’s biggest hotel is located on the river. They have an outdoor cafe. I’ve seen more people visiting it to go out and look at the installation,” he says.

Troy Houtman, head of the Wichita parks department, agrees that the added visibility for the river is a plus. “We definitely think it’s a great idea,” he says. “It diversifies the river and brings attention to it. It shows that it’s an assist that we can use.”

Houtman’s department helped Tabing with the permitting process and insurance necessary to get the installation on the water. Houtman says they’ve been thinking about the role they can play in getting people to engage with the river. At the end of this summer, they held some programing around the installation including a class for first-time boaters. He’s thinking about organizing small concerts and other gatherings next year.

“We’re going to be bringing some food trucks down to the river and having gatherings down there with music to activate that space on the bank,” he says. “Not full-on festivals. We already have 4th of July, and Riverfest with 15,000 to 20,000 people. We’re looking for smaller things that are easier to put on.”

Tabing’s brainstorming too. “There’s not a whole lot of activity currently,” he says. “My hope is to see not only more art, but dinner cruises or regattas.”

Longer term, Tabing is hoping a renewed focus on and use of the river might help reshape the pedestrian realm around it. “Two of the most important neighborhoods in the city core, downtown and Delano, are located [on either side of] the river,” he says. “But there’s no friendly pedestrian environment between. I’m hoping to make it more enjoyable.”

He also wants to see future development on the river that considers how people can access and connect with the water. “Some of the properties along the river really turn their back to the river,” he says. “A lot of the sites have been done in isolation without a clear vision and connectivity to the whole experience of the river.”

Of course, permanent changes to the physical environment are longer-term goals. For now, Tabing is focusing on the next ArkArt installation. The details are still to be determined, but he knows it’s going to be bigger than “DNA.”

“Given the scale of the river at that location, the next installation could be twice as large,” he says. “The current installation is 10 feet tall and 100 feet long. We can really grow this and do larger installations in the future.”