Controversial Plan Could Make Some Utilities Warm Up to Solar Energy 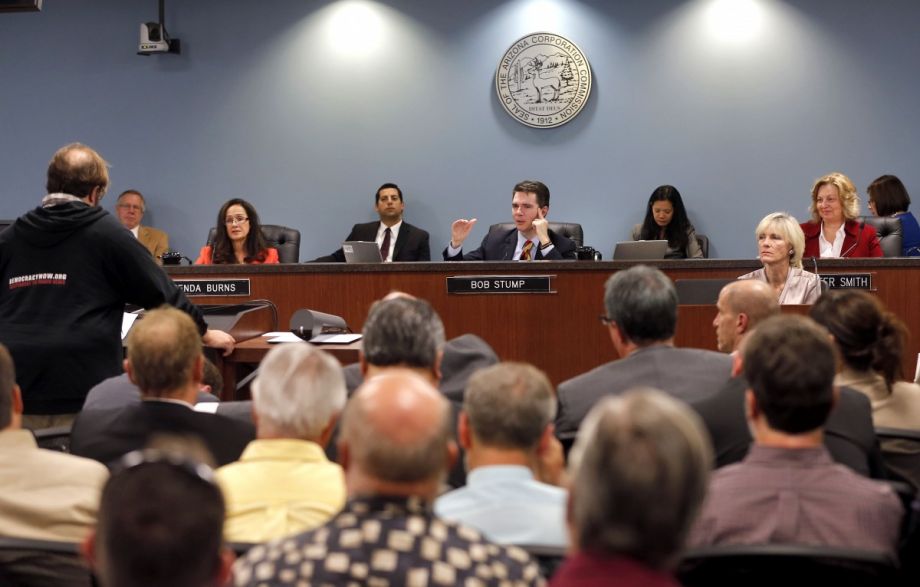 As rooftop solar prices plunge, many utilities see their bottom line plummeting with it. But in Arizona, one IOU has proposed a controversial new plan that could actually work for distributed solar-averse utilities. The question being asked by private solar companies, state regulators, environmental advocates and even free-market activists is: Will it work for anyone else?

In July, Arizona Public Service Company (APS) filed an unprecedented request with the regulating Arizona Corporation Commission. Typically, homeowners purchase or lease solar panels from private companies, becoming (somewhat) independent of utilities’ grids. Through net metering laws enacted in many states, utilities credit each system’s owner for any excess power they generate and don’t use. Essentially, these systems shrink an IOU’s ratepayer pool, which the so-called “regulated monopolies” tend to dislike. And because homeowners and business owners with solar panels still use some grid power (at night, when the sky is cloudy, etc.), many utilities argue that practices like net metering are unfair, because they spread fixed costs over a smaller ratepayer pool.

APS, however, wants to “rent” ratepayers’ rooftop space and install 3,000 of its own panels, paying the owner of each space a fixed amount of $30 a month. APS would own the panels and any energy they produce, instead of losing ratepayers to rooftop solar companies.

Soon after the IOU filed its request, a Utility Dive headline pondered whether APS had “invented a rooftop solar business model for utilities.” They could certainly use one. According to a 2013 report prepared for Edison Electric Institute, “disruptive technologies,” like solar photovoltaics, battery storage, fuel cells, geothermal energy systems, wind, micro turbines and EV-enhanced storage could “directly threaten the centralized utility model.” Thumb through many utilities’ lobbying and legislative records, and it’s apparent they already feel this “threat.”

Anything that could expand rooftop solar from a small and (too often) persecuted market should be good news. With top congressional seats now held by militant climate deniers and the global carbon budget leaking steadily away, solar, in the words of Grist’s Amelia Urry “may just save us all.” A recent, much-shared report from Deutsche Bank predicated that it would be cheaper than coal or natural gas energy in 47 states by 2016, encouraging investors to hop on board the sun train en masse.

But many of the usual advocates seem underwhelmed about APS’ plan. The Sierra Club’s local chapter, for example, has yet to provide much comment on it.

“The bottom line is that we want to see the solar universe expand,” says spokesperson Sandy Bahr. In order for the organization to get behind this program, she says, the Sierra Club needs to see that it will be “additive — not displacing other solar programs.”

Which is exactly what worries companies like SolarCity. Will Craven, a spokesperson for both SolarCity and the trade organization Alliance for Solar Choice says that APS’ monopoly structure threatens rooftop solar companies that have long relied on the free market.

“Monopolies are rare things in American society and monopoly rights are anti-competitive,” he says. Companies like SolarCity have “worked hard to deliver the best product at the best price to customers” without the ability to “bill a captive customer base.”

Craven theorizes that utility-provided rooftop solar could become artificially expensive. Because ratepayers fund both electricity and infrastructure — often without a clear breakdown — utilities can raise rates without any fear of losing their customer base. According to Craven, the Alliance is not against APS entering the rooftop market but, he says, it would “only be appropriate through an unregulated competitive division.”

On November 3rd, staff from the Arizona Corporation Commission recommended that the board reject APS’ proposal. Purchasing 3,000 distributed systems would simply be too expensive, they claimed, suggesting instead that APS offer more incentives for customer-owned rooftop solar — i.e., the very distributed system that terrifies so many IOUs.

APS did not respond to two interview requests by press time. But according to the company’s website, the program could actually make solar more affordable for people who couldn’t otherwise purchase their own system. Some of the panels would go to lower-income ratepayers, with costs absorbed into the customer base — not footed by individual homeowners.

This is not the first time APS and the solar industry have locked horns. A fight over net-metering laws last year led to dueling campaigns, with free-market advocates rallying around solar companies, and against the utilities’ monopolistic structure.

State-regulated private utilities do have a well-earned terrible rap when it comes to clean energy (and ethical behavior in general). It’s easy to view distributed solar as the good guy up against a bloated, rate-hungry network in bed with oil and gas. But, as the report for Edison Electric Institute details, the industry has historically fought rooftop solar because it’s terrified of losing its rate-base, not because it’s innately evil. What if utilities could get into the rooftop market, giving more low-income homeowners a chance to power their homes with systems they can’t buy? Free-market Arizona might not be pleased, but would the solar market expand overall?

For now, the Sierra Club seems to have the best rationale: Reserve comment until the picture clarifies. Solar prices are dropping daily, and that’s good news for everyone, regardless of what scared IOUs believe.