This Architecture Movement Wants to Trick You Into Taking the Stairs 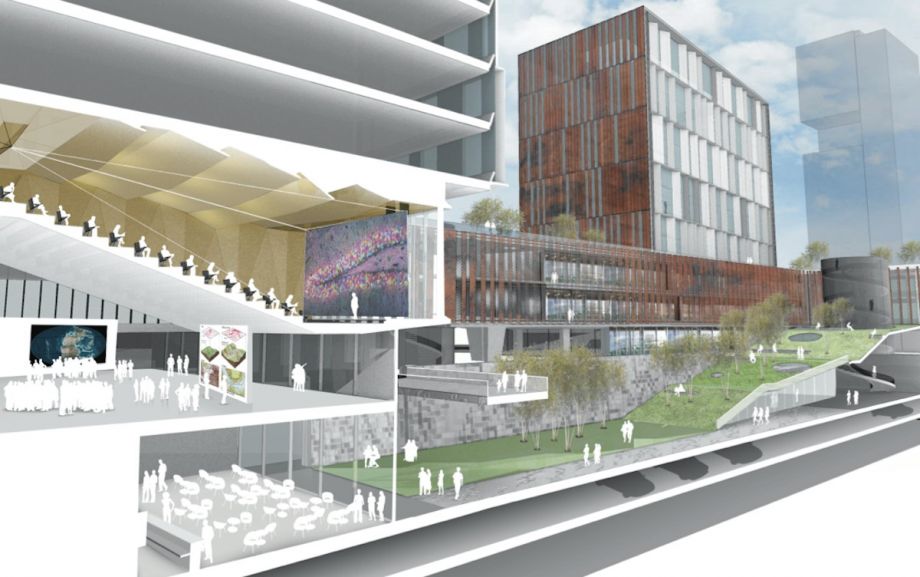 As we move through our cities each day, we make dozens of small decisions, based on dozens of small reasons. Take, for example, your decision to grab a seat because “I’ve got to shoot off this quick email and my left knee hurts.” What if the bench wasn’t there? Would your knee still hurt? And what made you choose to walk that route in the first place? The choices we make while navigating cities are influenced by subconscious factors that planners, architects and designers are beginning to mine and leverage. Some are wielding that insider knowledge to create places that will play mind tricks — to get us to make healthier decisions.

“Design professionals and developers have a real role to play in public health, and that role wasn’t understood a decade ago,” Joanna Frank, of the Center for Active Design in New York, says of the global movement in architecture and planning to encourage physical activity and to improve public health intentionally through the built environment.

In 2010, as part of a Bloomberg administration design initiative, a variety of New York City departments — from health and planning to transportation and budget — and the American Institute of Architects’ New York chapter published “Active Design Guidelines: Promoting Physical Activity and Health in Design.” The intro reads, “rather than just telling people to go the gym, public health professionals and advocates must work with architects, urban designers and planners to reverse the design trends that have contributed to declining physical activity.”

“Several of these strategies are common sense,” the guide notes, and indeed some seem so intuitive it’s hard to imagine why they are only in the last decade being broadly implemented. Take the idea that pedestrians will walk more if the streetscape is more inviting — intuitive enough.

But when the idea of “inviting” is deconstructed, a strange world of psychology emerges.

A study by the Robert Wood Johnson Foundation’s Active Living Research Program (which is cited in the NYC guide) established qualities of a streetscape that encourage walking, and they are far from common sense. Among the more intriguing examples are: “the degree to which people can see or perceive objects and activity — especially human activity — beyond the edge of a street,” or “the quality of a place that makes it distinct, recognizable and memorable,” or even “the degree to which streets and other public spaces are visually defined by buildings, walls, trees and other vertical elements.”

A blatantly counterintuitive active design principle states that placing more benches along a route encourages more people to walk there because people walk more where there are more places to sit. “It gives people the chance to stop off on the way and the confidence they can take a rest,” explains Frank.

Ennead Architects is currently studying how to apply these principals in collaboration with the New York City Housing Authority (NYCHA) to better utilize existing open spaces in and around NYCHA developments in the Bronx. (These efforts are separate from the more controversial de Blasio administration plans to lease unused NYCHA space.) As part of this year’s FitCity 10 Conference in New York City — a conference on active design sponsored by the AIA and the NYC Department of Health and Mental Hygene — Ennead, in conjunction with Mathews Nielsen Landscape Architects and Peterson Rich Office, led a multidisciplinary workshop to re-imagine underutilized spaces for new potential uses, such as youth recreation programs and community gardens. “It’s amazing just how effective gardening is for all ages,” says Frank, “especially for older adults. There’s so much evidence of physical benefits but it also does so much good for depression and social isolation.”

Many of the strategies emerging from the FitCity workshop include small tweaks in spaces that will hopefully create big differences in the ways they are treated and used. These include potential repurposing of “de-mapped” streets — ones the city has officially taken off of the map — on and adjacent to NYCHA sites.

“They look like streets but with fences at the ends of them. They are ambiguous and confusing. Spaces that are open and part of the street need to be more open and visible and barriers to entry removed,” says David Tepper, of New York City-based Ennead Architects.

Similarly, to get people to opt more often to take stairs, the stairs just have to be more visible. “Being able to see a staircase when you’re in a lobby greatly increases the likelihood that you will take it. It’s just the visual connection when you walk in. You just need to give people the idea and they will act on it,” explains Frank. “Stairs used to be relegated to secondary in people’s perceptions of places.” But this is going to change: New York City has already altered the building codes to allow for more creative and integrated use of fire stairs.

From-scratch cities in Asia and beyond might have better potential for a stairway-filled future. Where in traditional American cities, public space typically occupies the ground floor, in newer, denser cities, shops and restaurants may be spread over the first three floors — with underground connections to subways and regional rails two levels below. In these cities, Tepper notes, “we’re seeing a more vertical idea of the ground plane, which opens up more opportunities for physical activity — like stairs.” In this way, designers are changing the very way we conceptualize and behave in the cities we inhabit.

Active design principles may be sneaky and compelling, but will they be effective? It depends on the idea of success. Principles that get more people walking down the streets have proven to spur economic development by increasing foot traffic, cutting back noise and air pollution, and reducing crime. As far as outcomes for, say, diabetes, it’s still hard to say. The NYC guide cites a study in Atlanta, Georgia, that found mixing land use was associated with a 12 percent reduction in the likelihood of obesity. But according to Tepper, the jury is still out.

“The active city guidelines are good design principles that can contribute to more active living,” he says. “But tracts of high obesity and diabetes correspond to poverty. Stairs are a good thing, but they’re probably not going to solve obesity. A measurable impact remains to be seen. The research is really just starting.”