Architects Mark Inauguration With “Design as Protest” Day – Next City 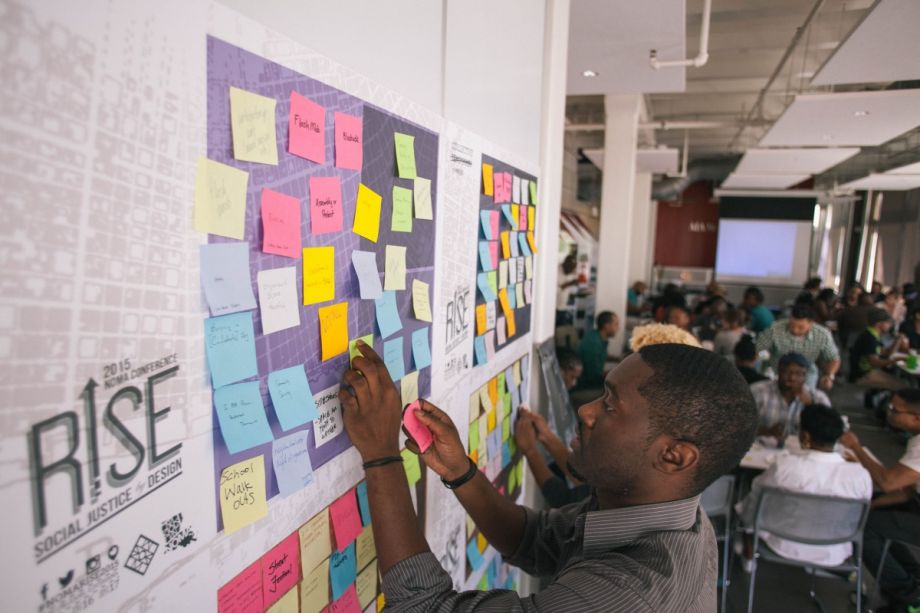 Participants at a Design as Protest Day in New Orleans (Credit: Bryan Lee)

Like many members of the American Institute of Architects, Bryan Lee was disillusioned last month when AIA CEO Robert Ivy put out a letter proclaiming its professional members “committed” to working with President-elect Donald Trump. As op-eds, tweets proclaiming #NotMyAIA, and letters began circulating en masse, the New Orleans architectural designer decided he wanted to do more than speak out against Ivy or Trump. He wanted to act.

“We always talk about structural racism,” says Lee. “It’s not one person, it’s a system. We have to defeat the system, not a person.”

Enter Design as Protest Day. As Trump is sworn in as president on Jan. 20, Lee will join other activists, architects, planners and community members in turning online conversations about social justice and design into live, local actions. Working with an informal cohort of justice-minded practitioners, Lee is coordinating “Design as Protest” workshops in cities around the country, from New Orleans to New York City to Urbana, Illinois.

Envisioned as a sort of national brainstorming session for creative, place-based interventions that drive social change, these workshops are being organized across academic, private and public spheres with the goal of inspiring the design community to take a collective stand against injustice

“A lot of the justice issues that we talk about every single day have direct implications for this administration,” says Lee, the director of place and civic design for the Arts Council of New Orleans and a 2015 Next City Vanguard. “We felt that it was necessary to have a response that matched the gravity of the implications.”

The idea for a national day of protest was developed out of conversations between Lee and nearly 20 other social-justice minded architects. It’s modeled off a series of local workshops held in New Orleans, but will be the first day of protest to happen on a national scale.

The ideas, sketches and renderings that come out of the Inauguration Day gatherings will then be recorded into a toolkit for doing social good in the design profession. The toolkit will visualize ways for designers to enact the forthcoming Design Justice Platform, a separate living document that is being created to serve as a social justice code of ethics for designers. A compendium from the Design as Protest events will be published later this year, but Lee says he hopes it serves as a continually updated resource for people to build off of.

The planners of the event are hoping for more than 25 workshops. One of those gatherings will be led by architectural designer Angela King in Urbana, Illinois. King, a project manager for the University of Illinois Capital Construction department, met Lee at the first design as protest event held at the National Organization of Minority Architects conference last year. (Next City was a media partner for the event.) She says the event gives activists a framework to come together and push for tactical interventions.

“I appreciate that the design as protest model gives me this infrastructure to work with organizations I’m already involved with here in Urbana,” King says. “It’s another way to organize and engage the community around a multitude of issues.”

King recently returned from a visit to Standing Rock where she saw the community quickly come together to use design to solve both immediate infrastructure needs — such as pop-up kitchens to feed thousands of people and sanitary plumbing set-ups — and social good.

“My personal focus at the day of protest will be looking at how to take what I was exposed to during the three days I spent at Standing Rock and translating that to a revolution in design in a variety of ways,” King says.

King also plans to recruit community members to her event who “don’t usually get a seat at the table,” such as young people and marginalized groups.

Ultimately, Lee hopes King’s gathering in Urbana and the other gatherings happening across the country will help bring the architecture and design professions back to their “true values” and provide inspiration for architects who want to do things differently.

“Architecture in itself is a representation of our ideals and our values; it is a consequence of policies and procedures and practice that happen over a long time to get there,” Lee says. “We have to find ways in which we are actually expressing values that are to the social good, and not just for capital gain.”