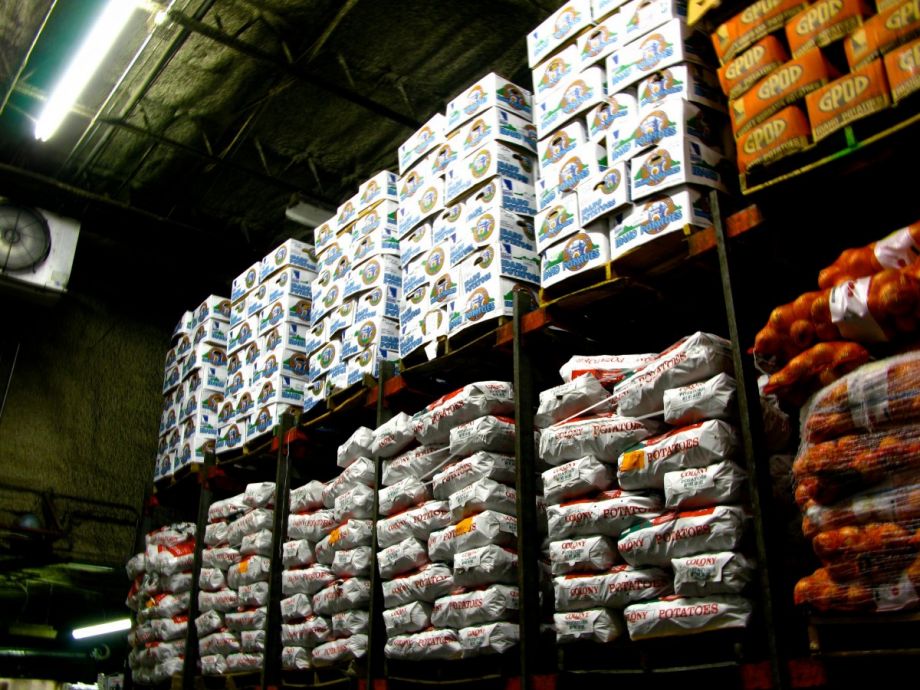 Shelves of onions and potatoes at the Hunts Point Produce Market, which handles 60% of New York City's produce (Photo by eeems / CC BY-NC-ND 2.0)

Workers at the Hunts Point Produce Market in the Bronx, part of one of the world’s largest wholesale distribution centers, have been striking since Jan. 17. Contract negotiations between workers and management broke down two weeks ago, Gothamist reports. Union members asked for a $1 per hour raise plus greater health coverage; owners countered with a 32-cents-per-hour wage increase, plus an additional 60 cents per hour going to health coverage. At that point, nearly 1,400 workers walked off the job.

Charles Machadio, a trustee with the union, told Gothamist that the workers, who distribute 60% of NYC’s fruit and vegetables to supermarkets and restaurants, deserve more than $1, because the pandemic has proven how essential their work is.

“We’re not being, like, greedy,” Machadio told the publication. “The men really deserve a $3 or $4 raise for coming here risking their lives. But we’re saying give them $1 raise and pay the health insurance and we do the contract and go home.”

On Day 4 of the strike, which happened to be Inauguration Day, Rep. Alexandria Ocasio-Cortez and other public figures joined the picket line to support the workers, Gothamist said.

“When you’re standing on this line, you’re not just asking for $1, you are asking for transformational change for your lives, over the lives of every food worker across this country, for kids or food workers across the country,” Ocasio-Cortez said, according to Gothamist. “Because there’s a lot of things upside down right now in our economy. And one of those things that are upside down […] is the fact that a person who is helping get the food to your table cannot feed their own kid. That’s upside down.”

This recognition now makes businesses owned by LGBT people eligible to become certified under the city’s Minority and Women-owned Business Enterprise (M/WBE) Program, which in turn gives these businesses the opportunity to bid on government contracts; The city has a 10-year goal to award $25 billion in contracts to certified M/WBE businesses.

In 2019, New York City spent $96 billion on procurement. Not all of that money went to small businesses, but the National LGBT Chamber of Commerce says that the certification creates “literally billions of dollars of opportunity” for certified LGBT-owned businesses.

Next City’s pay-what-you-wish “Power of Procurement” e-book describes the National LGBT Chamber of Commerce’s previous big win, in Louisville, Kentucky, as well as other ways that cities are using their money to support local minority-owned businesses.

After the reopening of the Paycheck Protection Program, the SBA approved 60,000 loan applications submitted by 3,000 lenders for more than $5 billion, Credit Union Times reports.

In the first week of round 3 of the program, the program was open only to community development financial institutions (CDFIs), which specialize in serving underserved demographics or regions, and the program was further restricted during the first two days to businesses that did not receive a PPP loan in the first two rounds of funding, the Pittsburgh Business Times reported.

The first two sets of PPP funding were criticized for not doing enough to steer money to very small, minority- or women-owned businesses. Guidance allowed lenders to restrict loan eligibility to existing customers, which shut out businesses less likely to have a preexisting lending relationship with a bank. And large banks “fast-tracked” their biggest customers’ loans, which were more profitable for the lending institution.