Another Take on Google, Kansas – Next City

Another Take on Google, Kansas 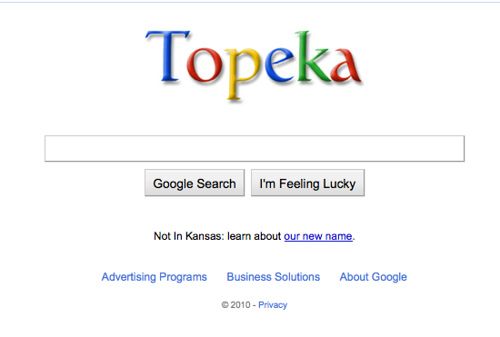 Juliet: “What’s in a name? That which we call a rose
By any other name would smell as sweet.”
Romeo and Juliet (II, ii, 1-2)

Bill Bunten, the mayor of Topeka, Kansas, and Juliet Capulet would have an argument on a lone balcony in a Midwestern corn field. Juliet, hair and nightgown flowing, would emphatically deny the significance of a name; Bunten, the 79-year old mayor, would shake his head. For the month of March, Bunten renamed his city Google, Kansas. Competing with other American cities to be part of Google’s “Fiber for Communities” pilot program, Topeka wanted to show its enthusiasm for the program. Google will install high-speed broadband networks in winning communities.

While the Mayor said in a CNN article that the name change is “just fun,” the Google win would be part of a serious urban revitalization movement in Topeka. Bunten is developing the waterfront, bringing bars and music to the downtown, and restoring the state house, among other projects. One of Bunten’s overarching goals is to attract the young, the hip, and the tech-savvy to Topeka.

Bunten’s right – high speed internet will most likely attract businesses, entrepreneurs, and even the occasional college grad to this Midwestern town. But is Topeka giving up its authentic character by usurping the technological superpower’s name and identity?

Topeka means “a good place to grow potatoes.” It is a cozy name, reminiscent of tight-knit farming communities. Today, the city is surrounded by fields of wheat, corn, soybeans and sunflowers . If Google comes to Topeka, agriculture will meet technology. I like the idea. The city will be cutting edge – modern – and also offer engagement with the land, Kansas topography, and community values .

Google picked up on the stunt and renamed Google “Topeka,” on April Fool’s Day. However, the company stands with Juliet on the balcony. They will not give Topeka preference in the competition, name change or no name change. Is Topeka “sweet” enough for the win? If ingenuity, creativity, and enthusiasm are part of the competition, this Midwestern town has a good chance.