A Cohesive Urban Agriculture System Sprouts in Rotterdam – Next City 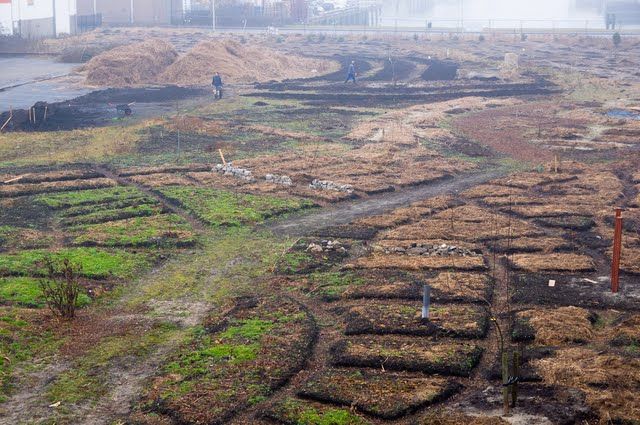 Daylight filters through the filthy glass roof. Dead plants hang forlornly from a steel frame. The drained swimming areas are now just sunken tiled pits, covered in dirt and surrounded by fake rock formations. At this abandoned swimming pool in the center of Rotterdam, two guys are spending a lot of time hanging out in the dank basement and former changing rooms. Tropicana—the former “tropical swim paradise”—closed its doors to the public in 2010. For three years it sat dormant, until August this year. That’s when Mark Slegers and Siemen Cox started using the complex’s windowless spaces to grow pink oyster mushrooms. Co-owners of RotterZwam, the two entrepreneurs go around the city collecting used coffee grounds to make the substrate that feeds the mushrooms, and then sell the fungi locally.

The term “urban agriculture” has received a lot of buzz in the last few years. Balcony tomatoes have become hip; Wellingtons are now a staple of European street fashion. For critics, however, small-scale private initiatives like window boxes and backyard chickens are a good way to encourage popular interest in gardening, not a viable way to feed hungry cities. The fragmented nature of these personal projects often prevents food produced in this way from reaching those truly in need. Such individual efforts need a system.

In Rotterdam, the beginnings of such a system are beginning to take shape. City officials and residents have come together to create one of the most coherent, citywide urban agriculture programs in Europe. The municipal government has made food production a priority, facilitating private initiatives through its generous regulations and open-minded approach to creative strategies. The city believes that urban agriculture offers multiple benefits: local food production encourages social interaction, increases public green space, mitigates the urban heat-island effect and strengthens biodiversity. Reduced transport distances lower net production of carbon dioxide, and innovative practices inspire others to get on board.

It’s a concept that hits quite close to home in this city, where many older residents still recall the “hunger winter” of 1944, when more than 22,000 people died while German blockades cut off incoming food supplies. In Rotterdam, butter disappeared first. Meat and cheese were next to go. By April 1945, 400 grams of bread and 1 kilogram of potatoes (less than one pound each) made up an entire week’s ration.

The famine had lasting effects on a generation of Dutch people, and the importance of local food production has been taken very seriously ever since. As one way of encouraging the next generation, the municipality of Rotterdam has pioneered educational gardens throughout the city. These 15 gardens are connected to local schools and open to the public. Local elementary school children follow a special program that teaches the basics of gardening and plant biology—and offers sweet rewards come harvest time. The students also learn to cook with the plants they grow, thus building the framework for a lifetime of healthy eating. There are other programs for toddlers and seniors who want to play a more active role in the educational gardens as well. 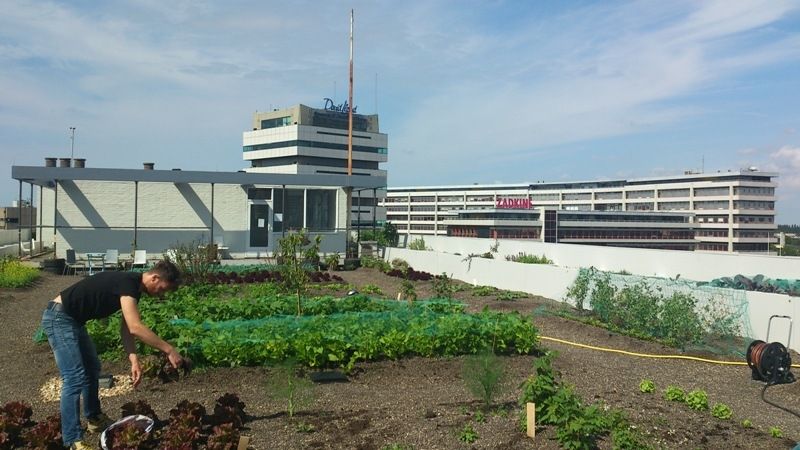 The city has also partnered with the Food Bank to ensure that residents with lower incomes are able to enjoy fresh, healthy produce. The Food Bank garden, or Stichting Voedselbanktuin, lies just behind the Food Bank itself in a run-down industrial area in west Rotterdam. In the midst of polluting industries and former factories, this organic garden uses permaculture techniques to create an oasis of green. Its fresh fruits and vegetables—as well as instruction on how to farm in an urban setting—are provided to low-income residents. The project was initiated when the foundation realized that fresh produce was becoming increasingly expensive for the city’s poor. Today, the Rotterdam Food Bank garden offers more than 3,000 residents access to healthier choices.

Such efforts to pull urban agriculture out of its rarified air extend to the city’s retail sector. At Stek, a new store in west Rotterdam, the focus is on making urban gardening more accessible. Marlou de Jong co-owns the shop with five others, and everyone has a different background – there’s a landscape architect, a biologist, a designer. Stek opened its doors in February 2013. According to de Jong, “It’s not only a shop, but also a workspace and inspiration platform where people can come drink coffee, read secondhand books and get advice.” De Jong’s background is in product design, but her current focus is participatory design for public space. At Stek, she helps organize workshops on everything from composting to drawing plants. On certain afternoons, the store itself becomes a bartering platform, with residents bringing plants and seeds to trade with each other. And of course, they sell shitake mushrooms from RotterZwam.

Rotterdam isn’t only interested in vegetables. In the southern neighborhood of Katendrecht, local residents built PigHouse with the blessing of the municipality. The project was initiated and organized by Rotterdamse Oogst and PeerGrouP. For a year, two pigs lived off local residents’ trash, and in November will be sent to the butcher. Later, they will return to the locals in the form of bacon, pork chops and loins. One of the project’s goals is to make the source of consumers’ meat more visible. Unfortunately, its initiators hadn’t anticipated the emotions this visibility would stir up. Earlier this month, a petition with 2,800 signatures made the rounds in the hopes of saving “Arie and Japie” from the cutting board, but the community owners of the pigs weren’t convinced to stay the upcoming executions.

Urban agriculture projects around Rotterdam are too numerous to list. Some of the most groundbreaking (like Dakakkers, the largest urban rooftop farm in Europe, and Uit Je Eigen Stad, a restaurant that serves chickens and veggies from its backyard garden) are based on the philosophy that food chains must be short and people should know more about how their food is produced. There is still a long way to go before Rotterdam can feed itself. But the framework is there, and as Siemen Cox points out, the glass-roofed swimming areas at Tropicana would make a fantastic greenhouse.