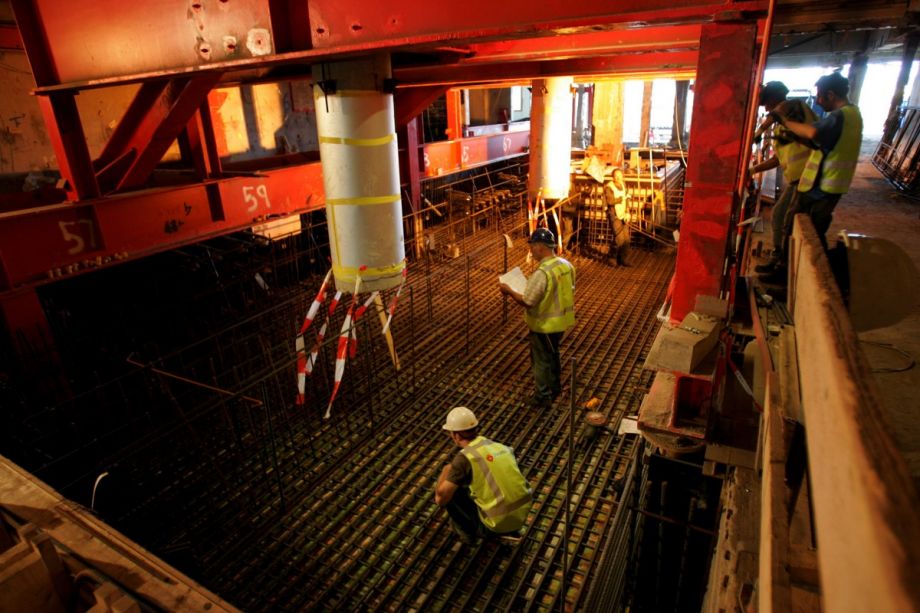 Global Rail News reports that Amsterdam Transport Minister Sharon Dijksma was also on hand for the formal opening of the North-South metro line, also known as Line M52. The 10-km (6.2-mile) line crosses the IJ river to connect Amsterdam’s north half with its south half. Most of it is underground, though the termini at Nord and Zuid stations are on the surface, as is the other station north of the river, Noorderpark.

First conceived in the 1960s, work on Line M52 began in earnest in 2003. Its opening date, however, was pushed back repeatedly when the project encountered difficulties in tunneling and suffered two ground collapses, according to a report in Metro Report International.

A spokesperson for Benthem Crouwel Architects, which designed the line’s seven stations, told GRN, “The task of engineering an underground metro 25m deep in the soggy soil of historical Amsterdam, built on long wooden stilts around 1300, was not an easy one. Thanks to a new tunnel drilling technique that was developed in the 1990s it became possible to create tunnels — at certain levels even 30 meters [98.4 feet] deep — in Amsterdam’s wet and unstable ground, without affecting the city too much.”

That method involved freezing the ground around the tunnel to stabilize it before excavating the tunnel using tunnel-boring machines. The section beneath Amsterdam’s historic Centraal railway station and the river itself runs through submerged box tunnels.

The delays and setbacks pushed the cost of the line from €1.4 billion (US$1.64 billion) to roughly €3.1 billion (US$3.63 billion). But the result transforms Amsterdam, as Mayor Halsema put it, from “a city on the IJ” to “a city around the IJ.”

Meanwhile, down under, excavation work has begun on a sensitive section of Auckland’s City Rail Link, a downtown subway tunnel for the city’s regional rail network that has been proposed and rejected on several occasions since the 1920s.

The International Railway Journal reports that the work involves digging a trench 14 meters (45.9 feet) deep that will hold two one-track tunnels extending from Britomart Station, the current underground in-city terminus for most of Auckland’s rail transit network, under Lower Queen Street. To prepare for the tunneling, contractor Downer-Soletanche Bachy Joint Venture spent two years stabilizing the ground beneath the station’s historic Chief Post Office (CPO) building so that tunneling beneath it could proceed. The weight of the 106-year-old building itself is being transferred to underpinning frames while the trenches are dug and box tunnels built; after the tunnels are complete, the CPO will be placed atop a new basement and ground floor.

With 1.6 million residents, Auckland is far and away New Zealand’s largest city. Successive city administrations have championed a downtown subway since one was first proposed in the 1920s only to have the proposals rejected mainly on cost grounds. In the 1950s, the New Zealand government decided not to build the rail portion of a proposed rail-and-freeway network to serve the city center, opting to build only the freeways instead. The City Rail Link project comes against a backdrop of rising ridership on Auckland’s rail transit system as improvements and electrification over recent years has reversed a decades-long decline.

Tel Aviv hasn’t even broken ground on its light rail system yet, and already the local transit authority is thinking about adding a heavy one.

The Israeli business website Globes reports that the NTA Metropolitan Mass Transit System sent a request for proposals for planning work on a proposed three-line metro system for Tel Aviv on July 19, one week after it opened bidding for construction of the light rail network.

Four firms will be chosen to do statutory planning for the proposed subway, whose estimated cost of 150 billion new Israeli shekels (US$41.05 billion) has yet to be budgeted by the Israeli government. Initial feasibility and design studies are now underway and should wrap up by year’s end. After that, the statutory planning process should begin; when that concludes two or more years later, actual construction of the lines can begin.

The metro is intended to serve a larger territory than the light rail system. The three lines would total 130 km (80.8 miles) in length and have 100 stations among them. Line M1 would run north-south for 73 kilometers (45.4 miles), line M2 would extend 25 kilometers (15.5 miles) from east to west, and the 32-kilometer(19.9-mile) line M3 would run in a semicircle, connecting with the other two lines. NTA projected 500 million trips would be taken on the system each year once it enters service.

Uber Steps In to Fill a Last-Mile Gap in Nice

The French Mediterranean resort city of Nice has a problem: Its tram line T1 operates until 2:30 a.m., but some of the bus lines connecting it to outlying districts shut down around 8 p.m. Metro Report International reports that transit operator Lignes d’Azur is turning to ride-sharing operator Uber to fill the last-mile hole.

Under a one-year pilot project, riders will be able to take Uber from any of six Line T1 stations to any destination with a pre-defined zone for a flat fare of €6 (US$7.02). The flat-fare service will be available from the time the last bus departs the station until the time the last tram arrives at it. The six stations involved are Henri Sappia, Borriglione, Gare Thiers, Garibaldi, Palais des Expositions and Hôpital Pasteur. More than 50,000 Lignes d’Azur users over the age of 18 who registered for the service will be able to access it using the Uber app on their smartphones.