The “Birdhouse” That Could Monitor Pollution and Provide Free WiFi 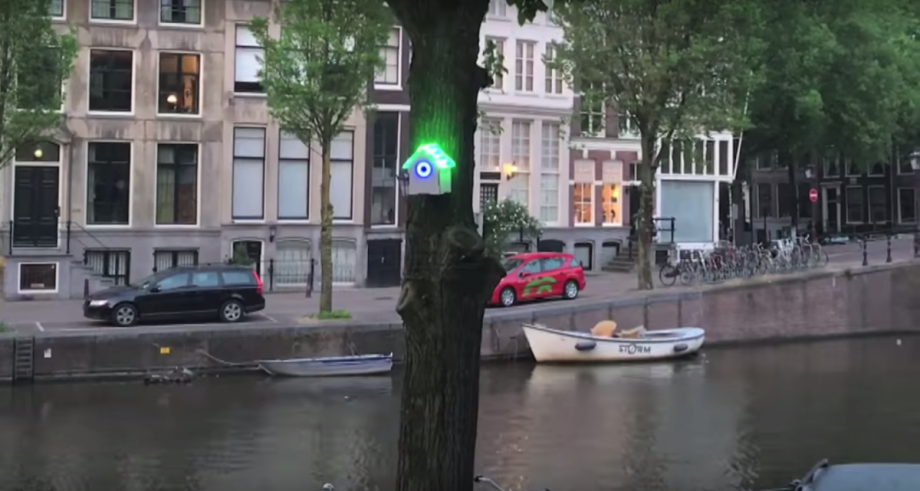 A TreeWiFi birdhouse signals that local air quality levels have improved and free wireless is on. (Credit: Joris Lam/TreeWiFi)

Despite Amsterdam’s legions of bike commuters and extensive public transportation, the city gets a D+ for air quality from the Scot-Free for the Climate campaign, trailing far behind Zurich, Vienna, Stockholm and Copenhagen. At least 11 different locations in the city surpass acceptable levels of nitrogen dioxide. To make Amsterdam residents aware of the air pollution problem, and reward them for doing something about it, Mother Nature Network reports that one Dutchman has devised an unusual intervention: WiFi-enabled birdhouses.

The high-tech “birdhouses” don’t actually house birds, but rather nitrogen dioxide-detecting sensors and WiFi routers. When nitrogen dioxide levels decrease to optimum air quality levels, lights on the TreeWiFi birdhouses glow green and the WiFi is enabled, providing free internet to anyone nearby. Those who log on get information about air pollution in their area, and tips on how to reduce it. When pollution exceeds safe levels, WiFi shuts off.

Designer Joris Lam says he decided to focus on the reduction of nitrogen dioxide because it is strictly related to combustion, and thus levels should decrease as traffic decreases. Fine dust in the air, by contrast, has a variety of sources and residents would see less of a direct impact from changing their behaviors. He’s received funding from the Awesome Foundation and is now using the crowdfunding platform Heroes and Friends to raise 6,500 euros to built and install five birdhouses in areas of Amsterdam where nitrogen dioxide levels are particularly high.

He writes on the project’s Awesome Foundation page, “By giving people free WiFi and cool lights when the air quality improves, I want to make taking the bike or public transport something that has a very clear advantage, and a street full of sparkling trees is really awesome, don’t you think?”

He ultimately hopes to install 500 TreeWiFi birdhouses throughout Amsterdam.