Amid Enthusiasm to Fix New Haven’s Highway Problem, Calls for Caution – Next City 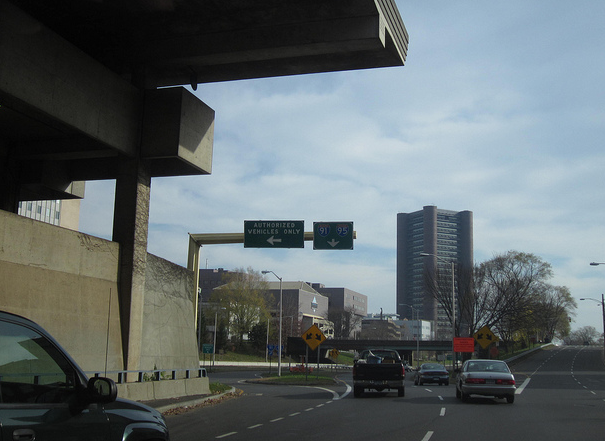 Yesterday we reported on how Washington, D.C. is looking to reclaim a piece of the city that had been gutted by the urban “reclamation” of the 1960s. The District plans to rebuild the original street grid, provide new pedestrian access to the waterfront and deck over an interstate and rail line. This week, the New York Times brings attention to New Haven, Conn., which is also attempting to heal the scars of a mid-century urban highway scheme.

Home to Yale University, New Haven was once the model of a New England town that had started to grow large (a town green still resides in the center). But now, the city is coping with the ever-familiar urban planning mistakes of the 1950s and ’60s. After white flight drained the city of its tax base, planners thought that removing “slums” entirely and replacing them with highways would draw more car-driving suburbanites back into the city to work and go shopping.

And now? The Route 34 expressway, coming off of I-95 and I-91, cuts New Haven into two parts, separating the downtown green and the majority of Yale University from the university’s medical schools, the train station and The Hill, a mostly working class and minority neighborhood.

But New Haven is seeking to mend this gash, sewing it together in a project they call Downtown Crossing. The project aims to redevelop the land that the highway uses into new destinations, banking off of the medical school’s associations with biotech firms and their ever-increasing need for office space. Alongside these goals, the project, like any contemporary redevelopment program, includes cited statistics of increasing employment in the area, increased tax revenues and more urban amenities such as retail and cycling. The centerpiece of the project is a $140 million, 10-story office building.

Will Downtown Crossing build a new highway rather than actually remove the original one? Credit: Doug Kerr on Flickr

The problem here is that New Haven’s project isn’t as glowing or heartily welcomed as D.C.’s project has been. The reason? It seems to many that the project has gone from being about removing the highway to remaking the highway. The New Haven Independent, a Next American City web partner, has detailed much of what some residents find lacking in the project: While the highway will be removed, it will be replaced with two four-lane roads separated by less than a block’s width and no cross streets. Most of all, many believe the project will fail at what should be its foremost goal: Reconnecting the Union Station and Hill neighborhoods to the Downtown and main university campus neighborhoods.

For opponents, while new developments are an important component of recreating urban vitality, the first and most important step is creating a dynamic street grid that can sustain not only infill but also livable pedestrian and cycling traffic, not just automobile traffic. This, they say, was the original problem with the ‘60s version of reclamation.

Many proponents of the project rebut the accusations saying that a project of such magnitude, and a problem as large as this area, cannot be solved overnight but will take many steps. For them, the Downtown Crossing is only the first step to reclaiming the area for the city. Project leaders have also pointed out concerted efforts for street calming, bike lanes and other “Complete Street” elements.

But the question remains: Should redeveloping immediately or tying back together the urban grid be the immediate priority? The situation, as it currently stands, is terrible — an urban highway tears the city apart. Proponents worry that delaying the project will jeopardize federal funding and a desperate need for more employment opportunities and tax revenues, which later on could go to further help efforts at urban regeneration. But there are those who caution that the mistakes of the past could easily repeat themselves.