Amid Bombings in Beirut, a Strange Sense of Normalcy – Next City

Amid Bombings in Beirut, a Strange Sense of Normalcy 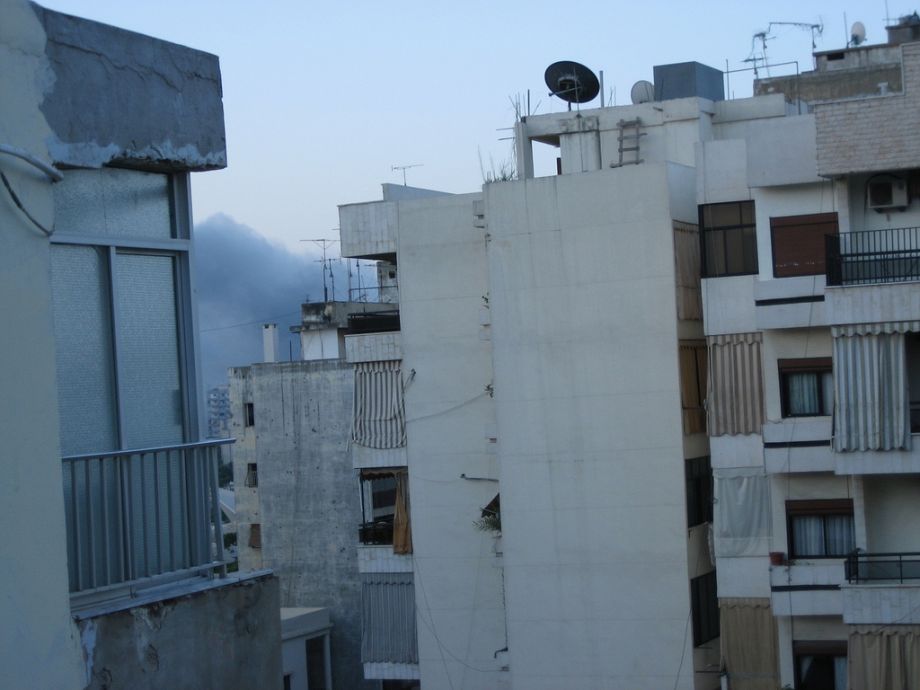 Smoke from a bomb rises over a neighborhood in Beirut. Photo credit: ZeNahla via Flickr

Across the world, cities are preparing for worst-case scenarios and looming disasters by building levees, earthquake-proofing buildings and drawing up evacuation plans. But for Beirut, except for the danger of a major earthquake that’s long overdue, the potential catastrophic threats faced by the city are mostly manmade and difficult to prepare for.

In the past year, there have been eight bombings in Beirut and its suburbs – four of them so far in 2014 alone. The bombings in Beirut – along with bombings and regular fighting between militias elsewhere in the country – have marked the worsening spillover of Syria’s civil war into tiny Lebanon.

When groups claim responsibility for bombings, they justify their actions by targeting areas for their sectarian or political affiliation. But the casualties are almost exclusively civilians: families sitting at home eating dinner or watching TV, employees working at shops, housemaids imported from Asia and frustrated drivers stuck in traffic invariably get cut down by the city’s now regular explosions

When these bombings initially began, the streets would empty and businesses would shutter early. But as the violence has become more frequent, a certain cadence of normalcy has started to appear in the aftermath of attacks.

Last August in south Beirut children rode bicycles and cafes continued serving up sandwiches and ice cream just hours after a bomb exploded a few blocks away, killing nearly 30. In my part of town, a middle-class Christian area that last saw a car bomb in October 2013, few even mention the carnage that often takes place just a few miles away. When a bombing is mentioned, it’s often relief that “this week’s bomb” is out of the way already (thus, in people’s minds, making travel around town safer for the next few days).

“The Lebanese are much more prepared to survive” in such situations than other people, says Sami Zod, the managing director of Zod Security, a company that sells security equipment for use in homes and offices. “If you go now to the place where there was an explosion, life will return back to normal.”

But beyond the mental coping mechanisms put in place by Beirutis to deal with the violence and ensure a sense of normalcy amid what many would say qualifies as chaos, the city’s residents – long familiar with danger – are also quick to protect themselves as best they can.

Of the eight bombings that have hit the Beirut area, seven have targeted the city’s southern suburbs, a Shia-majority area controlled by Hezbollah, the politically and militarily dominant Shia movement. Last year, Hezbollah announced it was an active participant in Syria’s war, sending thousands of fighters to back the regime of Bashar al-Assad. The move enraged Hezbollah’s local enemies, most notably Sunni militants who feel a strong connection with Syria’s mostly-Sunni rebels. Hezbollah quickly found itself in the crosshairs at home.

These days, businesses in south Beirut are piling sandbags in front of storefronts with many seeing future bombings and perhaps deeper strife as inevitable, at least as long as the war in Syria continues.

Hezbollah’s militia has erected checkpoints to search vehicles and closed off access to sensitive sites in the areas it controls. Elsewhere, the Lebanese Army has increased its presence, conducting patrols and manning checkpoints of its own on major roads and entrance points to neighborhoods that could be targets.

But even when Hezbollah and the Lebanese Army are deployed, car bombs still make it through.

For residents of areas that are targets, leaving is the safest option. Some people are leaving the country or at least their neighborhood, but picking up and getting out isn’t exactly easy or affordable. The fact is that no matter how bad a situation gets, many people will just stay put and try to continue living their lives as normally as possible – just look at present day Aleppo or Beirut during the height of Lebanon’s civil war.

Beyond leaving, all that can be done is attempt to protect oneself as best as possible, but even those options are limited. Flying glass is one of the biggest dangers from bomb explosions, which can turn windows into waves of razor-sharp shards even hundreds of meters away. To prevent windows from turning into a weapon, sandbags can be packed against them or tape drawn across them. Less visible – and preferred by those who have the money or don’t want the appearance of living in a war zone – is shatterproof film that can be applied to windows.

“Myself, I don’t move to a house without putting the film on because I have seen very tragic experiences with flying glass,” says Nada Nahme, the Lebanon sales agent for 3M, a manufacturer of protective film.

3M film costs between $30 and $80 per square meter depending on its thickness according to Nahme, making it one of the most affordable protection measures to implement in a home or office.

While there are ways to limit damage and risks, there is no surefire way to protect against bombings.

“There is no real equipment to protect small premises,” says Zod, the managing director of the security company. “The problem is they are no longer using 10 kilograms [of explosives] – they are using 90 to 100 kilograms.”