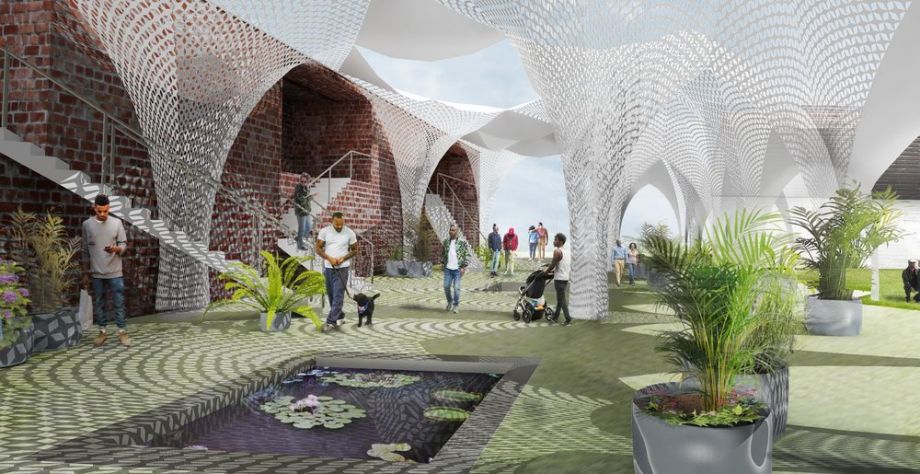 I meet Ulysses Newkirk for the first time in April on the front porch of a crumbling house, in Detroit’s North End. Many Motown legends once called the neighborhood home, and this day there’s a buzz about new opportunity. Newkirk shows me blueprints for an inclusive cultural hub he thinks can reactivate the area and celebrate its changing demographics.

As Newkirk offers details, a guy who works at a nearby school hops out of his car and starts asking how he can help. “I know a brick guy,” he tells us, and goes on to list other contractors who would love to offer their expertise.

Another car slows. It’s a neighbor, who asks Newkirk how long he’s going to be around and tells him he’ll be back later before he speeds off.

“What you saw there, that happens every day,” Newkirk says.

Maybe in some city neighborhoods, busy people go about their business without regard for what’s going on around them, but on this North End block — where there’s more overgrown grass than there are houses — everyone knows each other. When they see one person working to rebuild, they want in.

Now Newkirk and organizers from Ghana ThinkTank, a coalition of artists from Ghana, Morocco, Indonesia and more, are tapping that energy as they plan to build what they’re calling American Riad. A typical home style in Morocco, a riad has a courtyard where family and friends gather. There may be beautiful tiles, a small pool or fountain, and lush foliage. In the North End, where unemployment is about 23 percent and an estimated 43 percent of residents live in poverty, this concept will be adapted to be the centerpiece of an inclusive arts colony that organizers hope will also be an economic engine.

When Ghana ThinkTank co-founders John Ewing and Christopher Robbins first visited Detroit three years ago for a project that later fizzled out, they discovered in the North End a creative corridor already in the making.

They met Newkirk, who co-owns the Red Door Digital print shop. He was active in the Oakland Avenue Artists Coalition, which has been working to create a sustainable arts economy, including the construction of a public arts park, and which hosts regular events where locals showcase their work. Newkirk’s business partner, Roger Robinson, was involved in the North End Woodward Community Organization, which formed in 2011 out of concern over how the community would be redeveloped after the addition of a new streetcar line. (The QLine just opened to passengers last week.) With Ghana ThinkTank members from Morocco, who provided insight about the community benefits of riads, and the connections to the neighborhood through Newkirk and others, the American Riad project was born.

“Most of the countries represented [in Ghana ThinkTank] come from poverty,” says Ewing, who’s a digital media artist. “There’s this idea that we need to protect ourselves from people from other countries or that Americans need to save them … . Instead, there is a lot we can learn from these places.” In recent years, a large number of immigrants from Muslim-majority nations like Yemen and Bangladesh have settled within neighborhoods close to the site.

Newkirk and Robinson helped pave the way to secure the properties from the Detroit Land Bank Authority: an underused 12-unit, mixed-use building and the grassy lot that will one day be the American Riad courtyard. (Census estimates show that as of 2015, about 35 percent of residences in the North End’s ZIP code were vacant.) Beyond a community arts center, the renovation plans include six affordable housing rentals and commercial space for, according to Ghana ThinkTank’s website, “businesses that serve the needs of the North End, [involving] residents interested in preserving the North End’s history as a black creative corridor.” There’s one business there now, Red Jazz Shoe Shine.

Newkirk also wants American Riad to offer art classes and community engagement projects that are welcoming to women, Muslims and other marginalized groups. According to Ghana ThinkTank, American Riad, “rather than demonizing Muslims and immigrants as a threat to American culture and safety … instead looks at how we can adopt elements of Islamic and African Culture to solve American problems.”

Though the project will take another couple of years to finish, there’s already been economic impact. Residents have been at work rebuilding, bit by bit. Improvements include the installation of a water filtration system — constructed in March with the help of ThinkTank members from Indonesia – that collects rainwater that is then purified and will be used as a sustainable water source for each of the properties.

So far, two of the five of the courtyard canopy components have been constructed. Newkirk has worked with art production and training lab Incite Focus to train unemployed residents in the digital fabrication technology skills needed to design the intricate arabesque patterns found in the aluminum canopy.

A flurry of high-end housing and commercial space is targeted within walking distance of the new streetcar line, and America Riad project leaders are aiming for a sustainable renewal model, independent of the influence of outside developers. Ewing says in total the project will cost about $200,000. About $40,000 of that has already been raised and more funding is being sought from a combination of sources. Down the line, Newkirk says neighbors hope to see an empty lot across the street be developed into a micro-orchard, creating a sustainable food source and some work opportunities in urban farming.