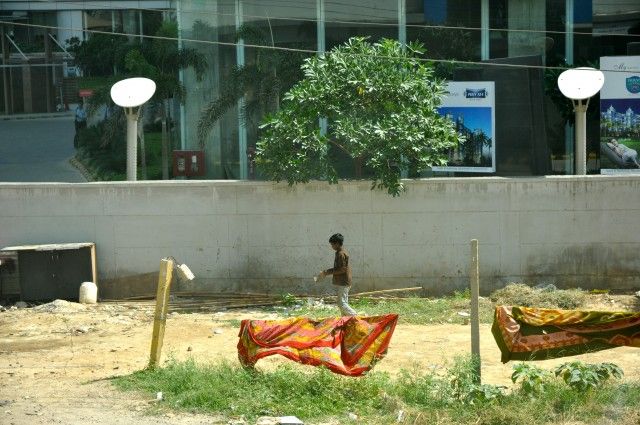 In Gurgaon, India, slum-dwellers live between high-rise condos and office towers. An nationwide initiative to build housing in India completed only 22 of 1,500 slated projects by deadline. Credit: Sarah Goodyear

In this week’s Forefront article, Sarah Goodyear highlights the gap between India’s rapid urbanization and the development of a civil society to match it. Through the example of Gurgaon — an urbanizing suburb of New Delhi where global corporate headquarters loom above slums and clogged streets — Goodyear shows how urban governance in India is racing to keep pace with pressing infrastructural and civic concerns.

The Jawaharlal Nehru National Urban Renewal Mission (JNNURM), named after a beloved leader of the Indian Independence Movement, is one of the most ambitious initiatives by the Indian central government to improve urban leadership and move forward with desperately needed infrastructure projects.

But the very gap that the initiative is trying to close has severely delayed its implementation. A report by India’s Comptroller and Auditor General (CAG), tabled today by Parliament, reveals that the JNNURM has fallen far short of its goals.

The report stated that just 22 of about 1,500 housing projects approved by the initiative have been completed by their due date of 2011. The CAG blames a lack of advisory for states implementing the funds and the inability of the central ministries to monitor their progress, the Times of India reports.

In Gurgaon, part of the problem is a disorganized public accounting system. The Indian Express reports that while many major Indian cities have at least begun to organize and reform their accounting systems, Gurgaon has has yet to enter the first round of development.

These reforms were meant to be a mandatory requirement of JNNURM, but the CAG has reported that just 20 percent of all urban local bodies — which are the basic administrative units of cities and towns in India — have implemented them.

“Thus, the objective to bring about reform in financial, institutional, and structural governance structure of the [urban local bodies] to make them efficient, accountable and transparent could not be achieved as had been envisaged,” the CAG’s report stated.