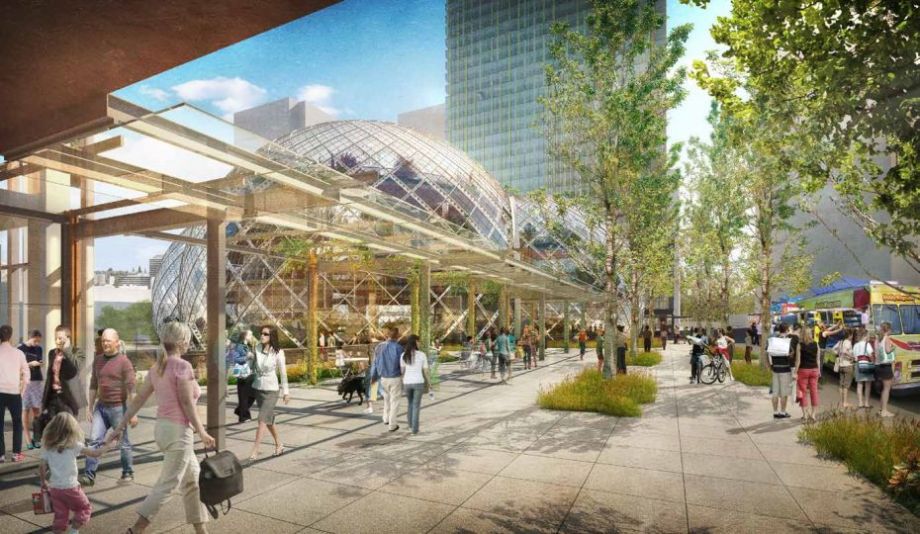 A rendering of Amazon’s proposed development of the South Lake Union neighborhood, including the “biodomes.”

Seattle loves a big corporation. Ever since the 1962 World’s Fair, it’s been the nation’s capital of space-agey, Jetsonian optimism, embracing companies that promise a spiffier future. First came Boeing, then Microsoft. Now there’s Amazon, which is leaving its mark on the city in a way that those previous corporate residents – which were located far from Seattle’s urban core — never did.

Amazon has spent the last few years pushing directly into the heart of Seattle. Last year the company snapped up 11 buildings in a neighborhood called South Lake Union, and the former warehouse district soon filled up with food trucks and coffee shops — a Millennial programmer’s paradise. As of this month, Amazon is in negotiations to acquire another 275,000 square feet of space a dozen blocks away near the neighborhood of Belltown. Then there’s the famous “biodomes,” Amazon’s proposal for a glassy, somewhat testicular monument to its own success, which the company hopes to emphasize with a trio of adjacent 38-story high rises.

Once complete, all of this construction will bring Amazon’s total Seattle square footage to more than 3 million. It’s a buying bonanza in a city not known for its cut-rate real estate prices. All told, Amazon is pouring billions into Seattle — $1.16 billion for the South Lake Union campus alone — and upending its real estate market, economy and population demographics.

In fact, the company’s modification of the city doesn’t even stop at its buildings. In South Lake Union and beyond, Amazon is creating the very urban amenities that local governments normally take care of. For the privilege of developing three alleyways, which are technically city property, Amazon is paying $10 million, according to Diane Sugimura, director of Seattle’s Department of Planning and Development. But as part of the deal, Amazon is also required to build wider sidewalks, construct two blocks of separated bike lanes (which will ultimately become part of the neighborhood’s larger cycling network), contribute public art to the area, add a streetcar to the existing system and carve out a dog run. Many of these projects Amazon will not only fund, but also design and build.

Sugimura believes such public-private collaboration is the future of urban design, as companies begin to find the prospect of getting a “cool neighborhood” as alluring as getting a tax break. In fact, Amazon reportedly asked Seattle for none of the traditional tax breaks that corporations routinely get from cities as a condition of locating there. Instead, it wanted a fashionable neighborhood that would allow it to attract top-notch talent. So the city “radically upzoned South Lake Union,” according to Sugimura, and eliminated its parking minimums. In return, the amenities Amazon is contributing, like the streetcar and the dog run, benefit the company’s employees and the city as a whole. (Amazonians can bring their dogs to work).

It seems to echo a trend playing out in other cities, as companies like Zappos, Twitter and Quicken (in Las Vegas, San Francisco and Detroit, respectively) move into neighborhoods seen as undesirable. Their free-spending employees then serve as anchors for revitalization. It’s a far cry from past decades, when corporations fled for the suburbs and took their workforces with them.

But Amazon’s gambit is bigger than Twitter planting a building on a dodgy section of Market Street. The company is essentially remaking an entire neighborhood in its own image. How this will play out is still unknown, though Sugimura says Amazon’s big buy-in has already prompted other companies like Yahoo and Google to expand or open new offices in Seattle to try to poach some of the incoming talent. And she’s not particularly worried about a repeat of the 1970s, when the decline of Boeing led to hard times for the city as a whole.

“In the early ’70s, Seattle was Boeing’s town,” she says. “When Boeing went down, Seattle went down.” (A famous billboard near the airport then read, “Will the last person leaving Seattle turn out the lights.”) But Sugimura says the city’s economy is far more diversified than it was back then, and even the collapse of Amazon — which still doesn’t turn a profit, in part because it buys so much real estate — wouldn’t be a death blow.

In many ways, Amazon seems a perfect fit for Seattle. The city’s corporate, caffeinated, reclaimed-wood-and-brushed-aluminum sheen suggest that the Emerald City is still up to the task of leading the country toward a future of technological know-how. Last week, on the eve of Cyber Monday, Amazon revealed on 60 Minutes that it’s prototyping a “drone” service to airlift packages from warehouse to doorstep in half an hour. It’s a little ironic that the company most feared for its ability to kill street-level retail is pioneering a new type of urbanism — one in which city and corporate residents are increasingly indistinguishable.