All This Snow Isn’t Slowing Down St. Paul’s Pedestrian Plan – Next City

All This Snow Isn’t Slowing Down St. Paul’s Pedestrian Plan 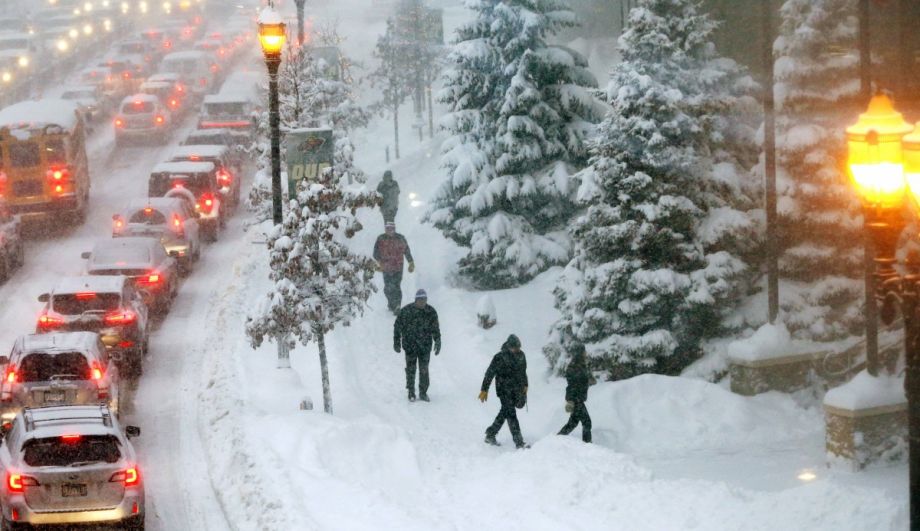 Traffic waits at a light as pedestrians arrive at Xcel Arena for a Minnesota Wild and Ottawa Senators NHL hockey game Monday, Jan. 22, 2018, in St. Paul, Minn. as heavy snow and strong winds are pushing through the Midwest. (AP Photo/Jim Mone)

Despite slick and snowy conditions, a handful of residents showed up last Friday for a public hearing to round out the public comment period on St. Paul’s first-ever Pedestrian Plan. Two residents spoke, including Pat Thompson, the co-chair of the St. Anthony Park neighborhood’s Transportation Committee.

While Thompson is pleased with general direction of the plan, she questions some of the areas that have been prioritized over others that she sees as more in need of attention, Eustis Street in her neighborhood in particular.

“In effect, it’s like a frontage road so it has no sidewalks, but there are houses farther down [Eustis Street] and several apartment buildings” that amount to naturally-occurring affordable housing Thompson explains. “There are folks there who probably don’t have cars. If they’re able-bodied, they can walk in the grass, but if you’re in a wheelchair there’s only the road,” not to mention snowy conditions that can render either option unavailable.

Not all St. Paul residents agree on building sidewalks everywhere, but everyone will have at least one more chance to weigh-in over the next month or so — not to mention there have already been 4,000 who have weighed-in through meetings, focus groups and surveys conducted as part of drafting the plan.

Late last year, St. Paul released the draft of its first-ever Pedestrian Plan, a proposed addendum to the city’s Comprehensive Plan that was adopted in 2010. The Pedestrian Plan declared that “we are more healthy, resilient, and connected because walking is safe and appealing for all,” and the city has set out to make walking a top priority. While the 91-page plan doesn’t explicitly set out to reduce car traffic, it’s certainly implied.

As the Monitor St. Paul reported, a majority of the city’s 1,080 miles of sidewalks are in poor condition because only six to eight miles are replaced each year. Additionally, the city has 330 miles of sidewalk gaps to contend with as well. Mayor Melvin Carter’s 2019 budget has almost doubled last year’s spending, earmarking $1 million for sidewalks.

The goals of the plan, the writing of which was partially funded through the Statewide Health and Improvement Partnership, include making sidewalks safe for everyone regardless of age or ability and increasing connectivity between various St. Paul communities. Several priorities have been identified in pursuit of those goals, from filling in sidewalk gaps to making it easier and safer to cross busy streets and increasing enforcement of driving violations that impact pedestrians. In order to achieve success, the city plans to pursue low-cost solutions in the interim and update the plan every five years.

“I’m pleased with the level of the support the plan has gotten,” says Fay Simer, the city’s Pedestrian Safety Advocate and leader of the Pedestrian Plan.

“We had a really engaged steering committee that included representatives from six of our council ward offices as well as our partners — MNDOT, Ramsey County, leadership from public works — so I feel like we have a group that’s really well-educated,” Simer adds.

The release of a draft of the plan on Dec. 14 kicked off a 30-day public comment period that culminated in the public hearing last Friday.

Sidewalks have been a touchy issue for years in St. Paul.

In 2017, St. Paul City Council passed a resolution stating that when public works does road construction, it will reconstruct sidewalks as a part of the project. But a separate policy allows a street to move its construction to the end of the currently decades-long schedule if 70 percent of homeowners with frontage property on a block petition to do so.

Late last year, that’s exactly what happened on a few historic streets in St. Paul’s Macalester-Groveland neighborhood. As the Pioneer Press reported, homeowners on Woodlawn, Stonebridge, and Stanford streets decided that too many trees and characteristic elements of their streets’ 1920’s construction would be sacrificed in the process of revamping sidewalks.

“In the past you could opt out of sidewalks and still get the [street] reconstruction. Now you get all or nothing,” explains Mike Sonn, president of the Macalester-Groveland Community Council. Sonn says that the community council hasn’t yet taken a stance on the Pedestrian Plan and declined to take one on the outstanding homeowners’ petition. “At the end of the day we decided it was [their] decision to make,” Sonn says.

And yet, the Pedestrian Plan “reaffirms that goal of constructing sidewalks on streets that don’t have sidewalks during reconstruction,” notes Simer.

The next chance to weigh-in will be a public hearing at the city council level, likely to occur in March.