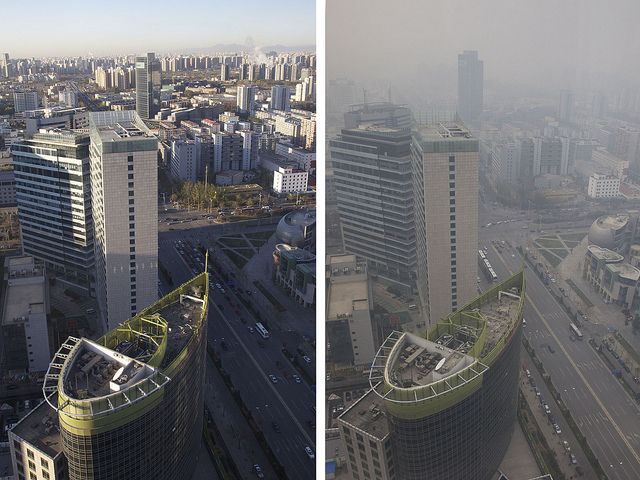 A clear day and a smoggy day in Beijing. Credit: Peter Barwick on Flickr

In the lead up to the 2008 Summer Olympics, Beijing officials, concerned about air quality and the health of athletes, relocated factories, instituted no-drive days and even limited the number of taxis and buses that could enter the city. Right before the games started, the local government managed to pull 2 million vehicles off the streets and reduce carbon dioxide emissions by 47 percent.

But in the nearly five years since, the air in China’s capital city has returned to dangerous pre-2008 levels. The New York Times reported last weekend that recent readings from the U.S. embassy indicate air pollutant levels there have climbed as high as 755 on the Air Quality Index.

The Index, based on the standards of the U.S. Environmental Protection Agency, usually tops out at 500. The World Health Organization considers a score of 500 to be more than 20 times above safe levels.

In the U.S., several cities have had similar struggles with air quality. Under the Clean Air Act, Birmingham, Ala. and Salt Lake City, Utah have both been found to be in repeated violation of the EPA’s air quality standards. But of the two cities, only Birmingham has been able to eventually meet the standards.

According to a Friday story in the Birmingham News, cooperation between environmental groups, the health department, industry and the local government has led to healthier air in Birmingham. The Jefferson County Health Department, along with the Alabama Department of Environmental Management, put together a plan that would better monitor pollution control among several industries.

In the winter months, air in Salt Lake City can be so toxic that governing agencies encourage the elderly, children and those with respiratory illness to stay indoors. School districts routinely cancel recess for school children on “red days.”

While Birmingham has found success in improving air quality, Salt Lake City has struggled. Local and state governments in Utah have been reluctant to force air quality standards onto major industries in Utah. The state is even looking to expand refineries near residential areas.

Under the Clean Air Act, Utah will have to find ways to meet the air quality standards or risk losing federal highway funds. The loss of federal funds was a motivation for the improvements made in Birmingham.