After Years of Organizing, Affordable Housing, Library Coming to Boston Chinatown – Next City 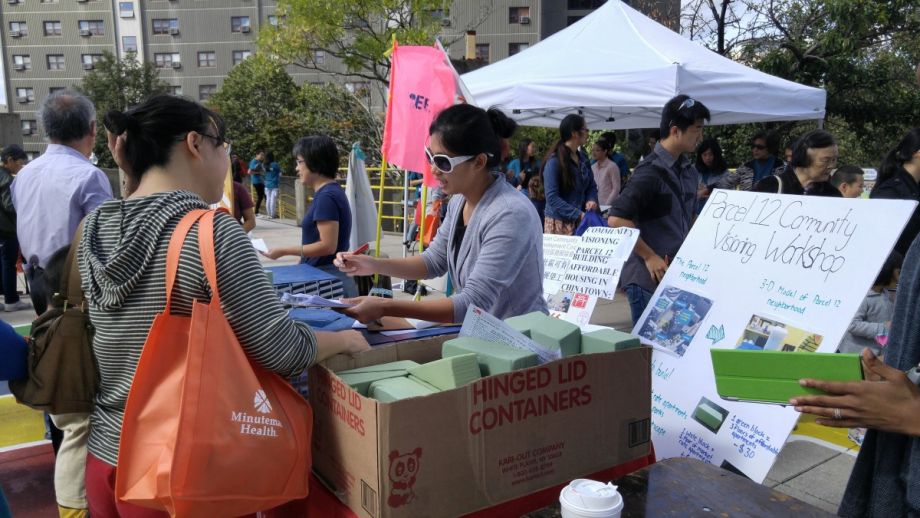 Asian CDC's community visioning workshops determined that Boston Chinatown residents wanted affordable housing and community space. And with the proposed redevelopment of the city-owned Parcel 12, they are set to get both. (Photo courtesy Asian CDC)

Chinatown is one of the few neighborhoods in Boston without its own public library branch. It was demolished in 1955, as the city paved a presumed path for the Boston Central Artery highway alongside other urban renewal efforts.

Decades passed until Chinatown youth sought to bring a library back to the community. In 2001, through the Chinese Progressive Association Chinese Youth Initiative, they formed their own advocacy movement, passing out bilingual postcards to build support. In 2006, the Boston City Council convened a hearing around the issue. But when the 2008 recession hit, momentum halted due to a constrained municipal budget.

Despite all that, “the youth kept going — they kept organizing,” according to Carolyn Rubin, an assistant professor at the Tufts University School of Medicine and president of Friends of the Chinatown Library. They applied pressure on local political candidates, including incoming mayor Marty Walsh. In 2018, the mayor oversaw the opening of a temporary library branch with the promise to secure a permanent location within five years.

These years of advocacy came to mind as Angie Liou, executive director of the Asian Community Development Corporation, sought to develop a city-owned parcel in the heart of Chinatown. “About three years ago, Angie contacted me and asked what I thought about community interest in having the library as part of their development application,” says Rubin.

That call led to a unique development plan to bring affordable housing and community space — including room for a permanent library branch — to a former parking garage. The city selected Asian CDC’s proposal last year and the Boston Planning and Development Agency granted permitting approval of the development plan in February.

For years, the Chinatown community has eyed the city-owned Parcel 12, long home to a parking lot. “Chinatown is landlocked, we have lost a lot of land to highway development and [Tufts’] hospital expansion, and so the fight over land has always been contentious and prominent,” explains Liou.

In the summer of 2015, Asian CDC led a community-wide visioning campaign assisted by high school students participating in its youth program. “We had workshops with Chinatown residents, surveys, and everything was done with translation in Mandarin and Cantonese,” says Liou. “At workshops we provided food, childcare, to basically do anything to lower the barriers to participation.”

Two main needs emerged: one for affordable housing and another for community space. About 12,000 people live within the quarter-square-mile that comprises Chinatown, but its proximity to downtown has made it increasingly attractive to for-profit developers.

In 2017, the city released a Request for Proposals to redevelop Parcel 12, calling for a large number of affordable residences among other uses. To undertake a large project that would maximize the affordable housing on Parcel 12, Asian CDC needed a partner.

MP Boston, a major Boston development firm, was looking to fulfill an affordable housing obligation to the city as part of a different market-rate redevelopment plan. “We wanted to leverage those requirements into something greater,” says Joe Larkin, principal of MP Boston.

Asian CDC and MP Boston then approached the two neighbors of Parcel 12: Corcoran Jennison, which owns an adjacent hotel, and Tufts Shared Services, which ran a garage on the adjacent site, about expanding their properties into the new development. “We asked if they’d like to be a part of this project by expanding their parking garage and by expanding their hotel,” says Larkin. “They thought about it and they both said yes.”

The partnership with the hotel, Tufts and MP Boston made it possible to pay a present value of $14 million for the site. The proposed redevelopment is anticipated to span 416,500 square feet with up to 168 affordable apartments and condominiums, a hotel component on the lower floors and an expansion of the existing Tufts Shared Services garage in the center of the site, shielded from the outside streets.

The ground floor will be anchored by indoor community space — anticipated to be the new Chinatown branch of the Boston Public Library, alongside a courtyard and pedestrian plaza connector.

The advocacy behind the library is still going strong. “When the development team first showed us designs, it was about 8,000 square feet,” says Rubin. “The Friends immediately knew that that’s not big enough.” Friends of the Chinatown Library pushed for a larger footprint to “accommodate the programming, services and resources that the community needs,” Rudin says. She’s hopeful the Boston Public Library will ultimately build a two-story library closer to 12,000 to 14,000 square feet.

The current plan is to break ground in early 2021, followed by two years of construction. The city will hold a lottery for the affordable apartments, expected to be reserved for residents making between 30 and 80 percent of the area median income. Liou stressed how badly affordable housing is needed in a neighborhood where residents have been pushed out due to rising housing costs since the early 2000s.

Liou also views the library as equally important in a neighborhood with limited land for development, and Rubin echoed the sentiment. “This win is so important right now, at a time when Chinatown has so many different pressures from development,” she says.

“Despite all the stories of the gentrification of Chinatown, it’s important that people don’t see us as victims,” says Rubin. “It’s a resilient community where people are fighting to honor its past and build for its future.”