After Two Years, Gabe Klein Steps Down as Chicago’s Transportation Chief – Next City 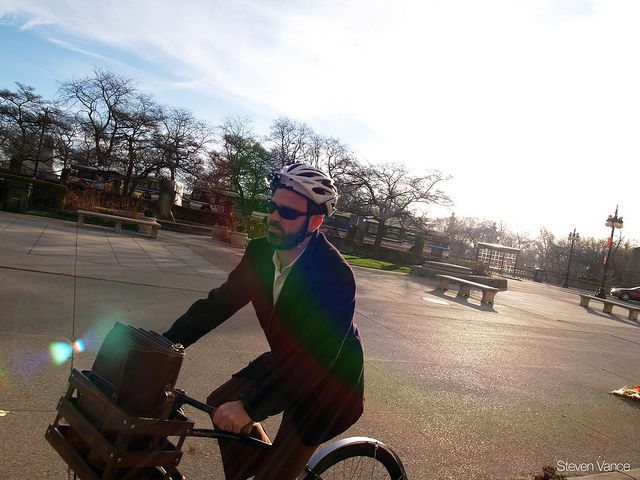 Gabe Klein, who has served as Chicago’s transportation commissioner since the beginning of Mayor Rahm Emanuel’s term in 2011, announced his resignation today.

Klein, 42, came to Chicago from the same job in Washington, D.C., but he never entirely left the nation’s capital behind. His wife, Stephanie Plummer, works for the U.S. Environmental Protection Agency there, and Klein will return home to start a family with her.

“One of the hardest things for me is leaving because we have been so successful, but I’ve got some family obligations,” Klein told the Chicago Tribune.

From the beginning of his career, Klein has moved as energetically between jobs as he has moved while he’s held them. Having grown up in the bicycle business — his father owned bicycle shops in Connecticut and Virginia — Klein went to work at Bikes USA after graduating from Virginia Tech. From there, he took over the Washington, D.C. operations of Zipcar, then a small car sharing company operating in a few East Coast cities.

Klein helped build Zipcar’s profile by convincing the District to allow on-street parking for the company’s cars, a tough sell to residents who thought it would result in more congestion.

“Some people said, ‘You’re taking away our parking spaces,’” Klein said. “Our data showed that, depending on the neighborhood, 10 to 21 cars were taken off the road with every car sharing vehicle. Now it’s 2013. Guess what? Motor vehicle registrations in the city have gone down.”

Klein’s dedication to expanding the transportation menu beyond single-owner cars and public transit caught the attention of D.C. Mayor Adrian Fenty, who hired him as transportation director in 2008. In that job, Klein helped established a regional bike share consortium with the Maryland and Virginia suburbs, added bike lanes to Pennsylvania Avenue and 15th Street, and laid down streetcar tracks. Emanuel quickly picked him up when Fenty lost reelection in 2010.

Chicago, which became a great city because of its position as the nation’s transportation hub (and which works hard to maintain that status), was a much bigger challenge, and Klein knew it.

“I came here for a few reasons,” he said. “I came here to work for Rahm. I came here as a personal challenge to myself. The fact that I have this impact I can see I thought was interesting, but I wanted to prove to myself I could do it again, and in a bigger city, and in a city that eats people alive from the outside, and in a city that is very complex in its transportation system. And in a city where to be honest, the DOT was known for… nobody knew that we even existed.”

Chicago knew Gabe Klein existed. He was a semi-celebrity, arriving at meetings on a Vespa scooter or pedaling around the Loop in a linen suit. Klein fit seamlessly into the city’s hipster bicycle commuter culture, often doing business in jeans and a cotton blazer, because they’re less sweaty than wool on bike rides. He brought a Smart Car to Chicago, but the battery died because he didn’t drive it for several months. Emanuel gave Klein a directive to make Chicago the most bike-friendly city in America, not just as transportation policy but also as economic development policy — the mayor wants to attract young techies who see cycling as an essential lifestyle amenity.

Quickly, Klein retrofitted Dearborn Street with a “Montreal-style” bike lane, moving the parking spots to the middle of the street and adding traffic lights just for bicycles. He also established Divvy, a bike share program opened this year and already has 300 stations. More controversially, Klein pushed Emanuel to install speed cameras near parks and schools, which he saw as essential for pedestrian safety in his multimodal city.

Klein is an expert at public-private partnerships, as well as an expert at moving back and forth between business and government. In a post on his personal website, he writes that “this will be the end of my public sector career for now” and “I… plan to rejoin the private sector.”