What Rwanda Can Teach U.S. Cities About Getting Rid of Plastic Bags – Next City

What Rwanda Can Teach U.S. Cities About Getting Rid of Plastic Bags 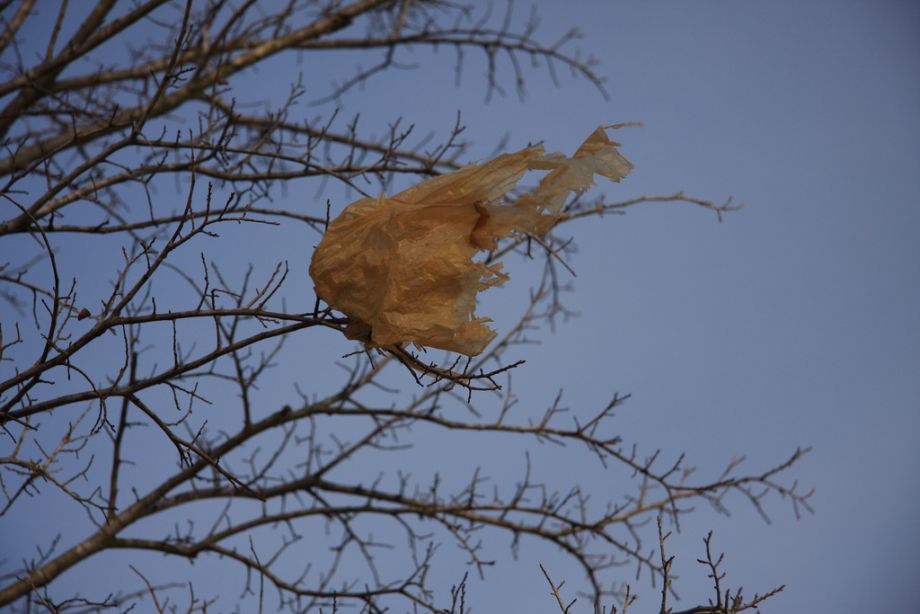 In Dakar, Senegal, the presence of a city or village announces itself miles before you arrive: large tracts of land are virtually carpeted with plastic bags. “If someone took a satellite picture of our country,” wrote one newspaper columnist recently, “you’d be forgiven for thinking that in Senegal plastic grows on trees… We’re drowning in plastic.” The environmental group Green Senegal estimates that the country goes through five million bags every day.

This used to be the case in neighboring Mauritania. But the streets of that country are baggie-free these days. While many Western nations still see the plastic bag as essential, Africa’s are plotting its gradual demise. Mauritania banned plastic bags entirely last year – now anyone caught with one risks a fine of $4,200, and tourists entering the country have had their plastic bags confiscated at the airport. It’s not the only one. Rwanda imposed its own ban in 2008, and the streets Kigali are reportedly now squeaky clean. South Africa did away with ultra-thin plastic bags way back in 2003, and was soon joined by Tanzania, Uganda and Kenya. Bag-banning legislation is currently being debated in Burkina Faso. As a whole, no other continent has done more to eliminate the disposable shopping bag.

How Africa came to pioneer this environmental movement is purely a story of necessity – most of these countries have little to no recycling, so banning plastic has been their best bet to combat waste. Because in Africa, litter is more than an eyesore. Dakar, for instance, is home to a multitude of animals, goats and cattle especially, which eat plastic three meals a day. One slaughterhouse in Nouakchott, the capital of Mauritania, once reported that 80 percent of the animals it killed had plastic in their stomachs. But today, Mauritania’s livestock are baggie-free. Plastic bags also blocks culverts, flooding cities and providing a breeding ground for malaria-carrying mosquitoes. Côte d’Ivoire’s Prime Minister Kablan Duncan told the press when he announced his country’s ban in November, “Plastic does not disappear over a year or two. It takes centuries.” Former Senegalese environment minister Haïdar El Aly used similar language when he proposed banning plastic bags in 2012: “A plastic bag that is given to you by a vendor does not even live for five minutes before it ends up on the street.”

Although such street vendors, shopkeepers and market stallholders ostensibly stand to gain from outlawing the bags — in Senegal, such workers spend some $2 million on plastic bags every year — the bans have weathered some blowback, particularly from business owners who have been losing market share to China as Africa’s economies liberalize and are flooded with cheap imports. In Senegal, social mores have also generated push-back. Vendors say their clients insist on plastic bags because they don’t want their neighbors to see how much they’ve spent on their shopping. And then there is the idea of public space, which some Senegalese see as theirs to use as they wish, especially in fast-growing and increasingly anonymous Dakar. In a recent thoughtful piece about the notion of a plastic bag ban posted on the website Senenews, geographer Youssouf Sané, who publishes regularly in Senegalese media on issues relating to the city, architecture and the environment, wrote: “The street is for everyone, so you can do what you please with it, irrespective of the consequences.”

In spite of this, Sané supports a ban on the importation, fabrication and use of plastic bags such as the one in force in Mauritania, but believes the state will have to impose it on the people. The Senegalese government, however, is dragging its feet. Senegal announced a bill to ban the disposable bags as far back as 2012, but since then nothing has been heard from the government on the topic.

So it’s up to the people to reclaim or indeed reinvent the public space, argues Sané. “Let’s get rid of our fatalism and meet the challenge to make our cities and our land clean. Set settal!” This last phrase is a powerful rallying cry in Wolof, the language most widely spoken in Dakar. It means “to render something clean.” The slogan was used by citizens in the 1990s to reclaim the public space the state had abandoned when it privatized garbage collection. One could see it as a step forward that it is now being used to call for such garbage not to be produced in the first place.