Affordable Housing Exists in New York, But It’s a Lottery – Next City

Affordable Housing Exists in New York, But It’s a Lottery 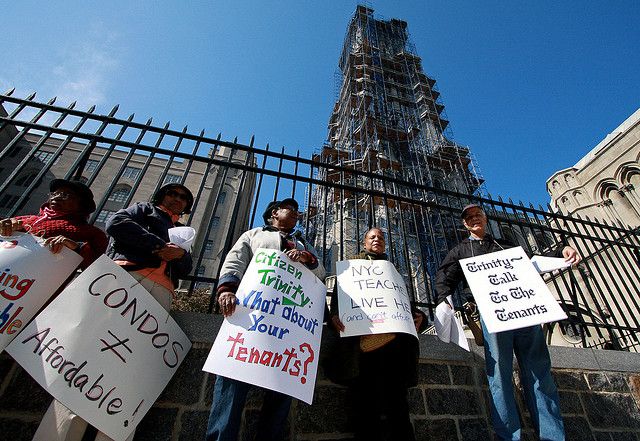 New York City rents are on the rise — and the sun sets in the west, I know — with the average rental rate hitting $3,017 this week, according to a report from real estate research firm Reis.

“Affordable housing is fundamental to our long-term economic prosperity,” Mayor Michael Bloomberg said when assumed office in 2002. A 10-year affordable housing plan, which began in the 2004 fiscal year, was his strategy for demonstrating his commitment to those voter-friendly words. The $7.5 billion effort is on track to be completed next year, topping out at 165,000 apartments (some new, some preserved, many in 80-20 split mixed-income buildings). For each dollar invested by the city, the housing plan has leveraged $3.43 in additional funding for a total commitment of more than $21 billion.

But middle-class workers — those who, from MTA operators to public school teachers to young professionals, keep the city humming — are still being priced out.

Nearly one-third of New Yorkers are severely rent burdened, according NYU’s Furman Center for Real Estate and Urban Policy. This means they spend more than half their monthly income on rent. And about 46 percent of New Yorkers were near poor in 2011, which means a family of four that earns less than $46,000 annually.

For the lucky ones, there are units in the hundreds of mixed-income city-subsidized buildings — 80 percent of the units are market-rate, 20 percent affordable—the city has built in the past decade. But it’s a literal lottery. Affordable housing for middle class families exists, you just have to cross your fingers and hope your name gets drawn.

I talked to one Brooklyn resident — we’ll call her Kate, as to not strain her relationship with her landlord — who hit the jackpot on a $599-per-month, one-bedroom apartment on the border of Clinton Hill and Bed-Stuy, on the same block where Dave Chappelle shot his 2005 documentary Block Party. Residents had to fall in a certain income window, and no more than two people can live in an apartment in her building. (As a result, many single working parents live there.)

Kate moved into her apartment in 2008 after she won the lottery. “It was a crapshoot,” she told me. “I figured I might as well see if I can get this apartment. And then I did.” The most encouraging part is that you can’t get kicked out if you get a better job or a promotion. Once you’re in, you become a regular rent-stabilized tenant. As long as your family doesn’t grow, you can stay in the neighborhood.

WNYC is looking back at Bloomberg’s reign with its “New York Remade: The Bloomberg Years” series, and took a peek into the city’s affordable housing on Tuesday. The radio station highlighted a new affordable housing unit on 166th Street in the Bronx with a brand-new gym and a glass-enclosed vegetable farm on the roof. To live in the building, a couple with two kids can’t earn more than $52,000 annually.

About 5,000 households applied for 124 apartments in the Bronx building.

A spokesperson from the NYC Department of Housing Preservation & Development told me the department “receive[s] an average of 40 applications for every one new unit offered through the lottery, but the number can increase or decrease depending on location; i.e. the Gotham West development in Manhattan’s Chelsea neighborhood received 26,000 applications for 250 low-income units.”

What’s left for the thousands of households that don’t win the lottery is a vicious renter’s market with a constantly increasing population. People want to live in New York, so they are willing to pay New York rents. “It’s a double-edged sword, because the more people that want to live here, the more expensive it becomes,” Ingrid Gould-Ellen, co-director of the Furman Center, told WNYC.

Bloomberg’s plan was ambitious. Though 165,000 units might not be enough, it’s still 165,000 apartments that are affordable, not market rate. But as New York continues its quest to maintain status as a global city, lawmakers are going to have to increase the amount of affordable housing, and not just on the fringes of the outer boroughs.

I’m an advocate for the free market, but the next mayor will have to build on Bloomberg’s plan. The farther out the working class gets pushed, the more homogenized neighborhoods become. And the last thing New York needs is more shiny, dull neighborhoods.

For more, take a look at WNYC’s graphic on rent burden in New York below.