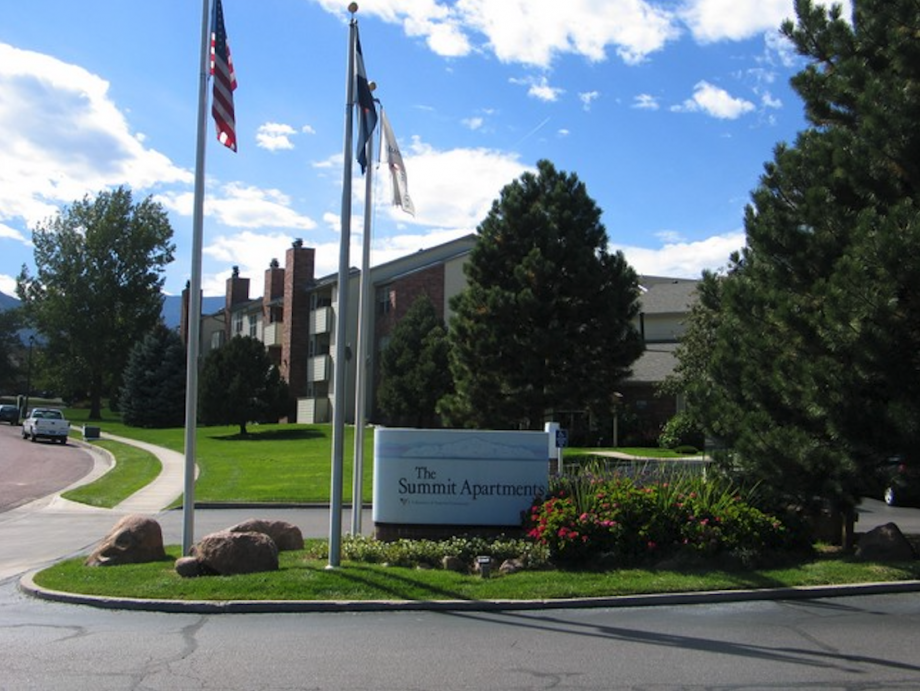 If you count up the number of affordable housing units under the purview of the Colorado Springs Housing Authority (CSHA), whether it’s through Section 8 vouchers, public housing units they own and manage, other units they’ve developed and own, or units under outside management through tax credit partnerships, it amounts to a little over 5,700 units in Colorado Springs and the surrounding El Paso County.

“It really takes a big toolbox to try to address a problem that is as pressing and as expensive as affordable housing,” says Chad Wright, executive director at CSHA.

“When you hear REIT, your first thought is not necessarily affordable housing,” Wright says. “It’s an interesting structure, and they were good to work with.”

The deal, CDT’s first in Colorado, preserves and deepens affordability for all 256 units at Summit Apartments, a 30-year-old complex. In exchange for part ownership of the building, CDT provided $2 million in long-term financing to VOA, which includes $1.5 million for improvements at the property, including kitchen updates, new windows, other energy upgrades and new retaining walls.

VOA will stay on as part owner and property manager. Constructed in 1986, the property was acquired by VOA in 1993, salvaged from that era’s Savings and Loan crisis. The Colorado Housing and Finance Authority helped finance the acquisition.

Thanks to a 100 percent property tax abatement granted by CSHA, 85 percent of the units will now be reserved for families at or below 50 percent area median income (AMI), and the rest of the units will serve those at or below 80 percent AMI. The housing authority gains the ability to refer qualifying tenants to the location when there are vacancies.

“It’s in a part of town where land costs are high,” says Wright. There’s good highway access and it’s close to downtown, with a five-star resort nearby, he adds.

“It would be very difficult to [do] a new affordable deal, especially where 85 percent of the units are at 50 percent of AMI,” says Wright. “To preserve it at that level of affordability was very appealing to us as something that would be incredibly beneficial to Colorado Springs.”

In an affordable housing needs assessment conducted in 2014, CSHA found that half of renters and a third of homeowners with mortgages in El Paso County are cost burdened, meaning they spend over 30 percent of their income on housing. Based on population income levels, the county needed 24,513 more affordably priced units to relieve every cost-burdened renter and homeowner.

Preserving existing units, like those at the Summit, is part of their plan to address that.

“We look at affordable housing as a line in a continuum,” Wright says. “Even if you’re adding new units on the front end of that line, if you’re dropping units from the back, you’re still not moving the ball.”

Housing authorities all across the country are grappling with the same forces. Many of the earliest privately owned affordable housing properties are reaching the expiration dates of the tax credit deals that financed their construction. Congress created the Low-Income Housing Tax Credit (LIHTC) program in 1986, incentivizing the construction of over 2.5 million affordable rental units since inception. Now, those investors are starting to cash out.

There’s no guarantee that the second owners of a rental property built using LIHTCs have to maintain the affordability guaranteed under the tax credit. Created in 1999, CDT started out as a REIT because of the potential to buy out the first generation of low-income housing investors just as their tax credit obligations began to expire. As a REIT, CDT could offer those investors a chance to cash out, while preserving, and in some cases deepening, affordability in existing affordable housing properties.

“We’re one of the groups that are coming in and buying, for example, your 15-year tax credit properties that are 15 years old, or the HUD property that might be even 30 years old,” says Brian Dowling, senior vice president for community investments at CDT.

In this case, VOA wasn’t looking to cash out, but wanted to make improvements to the building, and saw CDT as a potential partner across the rest of its massive portfolio.

“They’re not looking to necessarily flip a property in a couple of years and cash out. They are in it for that long-term mission and margin as their underlying investors are looking for that same approach,” says Robert Gibson, executive vice president and chief of staff at VOA. “It made a lot of sense to start with this one and see if we can’t start replicating this model.”

VOA’s portfolio of affordable housing currently includes 484 properties in 40 states and Puerto Rico, with 19,426 affordable housing units enriched with services focused on the formerly homeless, families with children, the elderly, veterans and their families, and people with physical and mental disabilities.

Since its inception, CDT has already invested over $1.25 billion in debt and equity capital to properties in 44 states and regions — helping to preserve and create over 40,000 units of affordable housing. To get to that scale as a CDFI, it helped that large institutional investors are familiar with REITs from their conventional dealings. It’s a way of using Wall Street tactics to preserve affordable housing.

CDT raised $32 million in its initial private offering, and has since raised $153 million in capital, mostly from large banks and insurance companies. It’s also a member of the Federal Home Loan Bank of New York, giving it access to a source of cheap, flexible, on-demand capital that has only recently been accessible to CDFIs. CDT was also the recipient of $125 million in financing from the first round of the U.S. Treasury’s CDFI Bond Guarantee program.

With that degree of firepower, CDT can do things like in 2013 when it acquired a 360-unit affordable housing development on Coney Island, whose previous owner had been planning to move it into market-rate status. It was CDT’s first transaction in its hometown of NYC. The deal preserved the affordability and kept current tenants in the building. A hurricane (Sandy) in the middle of closing negotiations didn’t delay the deal one day, even as CDT worked recovery and resilience elements into the deal after the storm hit.

Or, in CDT’s largest equity investment to date, last year it partnered with the housing authority in Austin, Texas, to acquire 642 market-rate units across two properties and convert half the units into long-term affordable housing for households earning less than 80 percent AMI. That’s 341 units of affordable housing created at the stroke of a pen.

“We’ve grown into the ability to do those larger transactions,” says Dowling. “The structure’s allowed us to scale up over the course of time and put ourselves in a position where we can tackle some of these large opportunities that arise.”

All that, while also paying investors a dividend every year since 2001, totalling more than $75 million.

UPDATE: This post has been edited to show more up-to-date numbers for CDT investments and dividends.