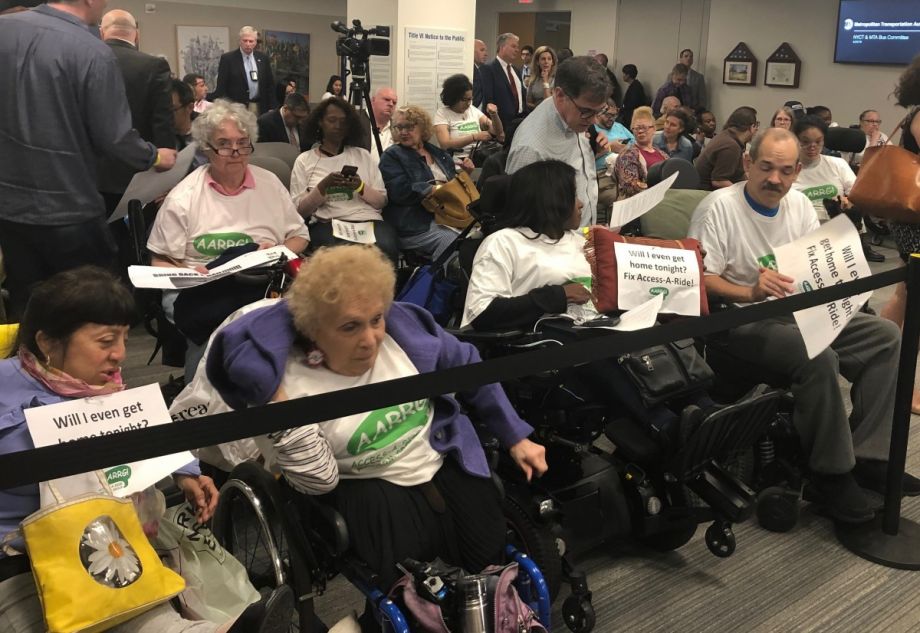 The Access-A-Ride Reform Group protested subpar paratransit service at the MTA board meeting Monday, carrying pillows that said “Will I even get home tonight?” (Photo by Emily Nonko)

Nigel Floris is a disabled New Yorker living in the transit desert of Canarsie, Brooklyn. To move through the city, he depends on the Metropolitan Transit Authority’s Access-A-Ride service, a necessary addition to a city subway system only 24 percent accessible.

Since March, Floris has used a new service offered by Access-A-Ride, known as “enhanced broker service,” in which he schedules a taxi or for-hire vehicle, rather than a dedicated paratransit van to take him to his destination. In theory, this means more frequent, direct car service than what’s offered by Access-A-Ride’s blue-and-white branded pickup vans. The reality is different.

A few weeks ago, he scheduled a 3:15 p.m. pickup from Lower Manhattan to return to Canarsie. He waited for the car until 9 p.m. With all his calls to Access-A-Ride unsuccessful, he finally called his stepfather and asked for his assistance to get home.

“It was a long day, that day,” he says. “New Yorkers should know that even though it’s a good service to have, it needs to be more prompt and it needs to be honest.”

Floris’ six-hour wait represents an extreme. Still, it’s indicative of a difficult transition for Access-A-Ride as the MTA seeks to better serve disabled New Yorkers in a city with one of the least accessible public transit systems in the world. This Monday Floris joined a group of advocates known as the Access-A-Ride Reform Group, which goes by the acronym AARRG!, to protest subpar service at the board meeting of the Metropolitan Transit Authority.

To understand current-day concerns over Access-A-Ride, it helps to look at its origins. The service emerged in 1990 as pressure to accommodate disabled passengers grew. Instead of making all subway stations accessible, the MTA invested in accessible bus systems and paratransit services.

It turned out to be a “horrendously bad decision,” Howard Roberts, former top official at the MTA, told the Wall Street Journal. He deemed it “a hundred times more expensive to go with buses and paratransit than it would have been to bite the bullet and simply rehabilitate the stations and put elevators in.”

The poor state of subway accessibility adds increased pressure to Access-A-Ride, which is only offered to New Yorkers who go through an intensive application process and must be scheduled with exact pickup and dropoff locations in advance. (There are roughly 144,000 users today.)

The service offered in blue-and-white vans has become plagued with issues. Complaints from riders and transit advocates — from slow and inefficient service to a failure of the MTA to monitor the performance of its contracted drivers — were highlighted in a 2016 report by New York City Comptroller Scott Stringer.

Following the report, the MTA worked to expand Access-A-Ride beyond the vans. An “on-demand e-hail” program launched in 2017 allowed 1,200 pilot customers to electronically hail taxis on demand, similar to using a ride-hailing service like Uber or Lyft, but at a flat price of $2.75. In addition to the small pilot, all Access-A-Ride customers were given the opportunity to use “advanced reservation e-hail,” which let customers book a taxi in advance.

This March, the MTA replaced “advanced reservation e-hail” with “enhanced broker service,” promising a continuation of online booking. But unlike advance reservation e-hail, the brokerage service would be operated in partnership with taxi technology company Curb Mobility LLC and expand the fleet of cars to include other for-hire vehicles. Since the transition, issues have been plentiful.

“The problem with broker service is that it isn’t as good as cabs [through advanced reservation e-hail],” says Joe Rappaport, executive director of the Brooklyn Center for Independence of the Disabled. “There’s a very good chance you won’t get a direct ride to where you’re going.”

Some broker service drivers make multiple pickups, which lengthen trips. Riders also spoke of pickup delays, poor communication and service from drivers, and overall lack of transparency from the MTA. Their frustration was on full display at this Monday’s board meeting, with protesters hoisting up pillows reading “Will I even get home tonight? Fix Access-A-Ride!”

“Before, green and yellow taxis would come on time, riders would get to where they needed to go,” testified Valerie Joseph, Access-A-Ride advocate for the Brooklyn Center for Independence of the Disabled. “Now, many riders detest taking the services … we’ve testified about the lack of consultation and notice to riders, that was bad enough. Now many of us are stuck with horrendous service once again, just like Access-A-Ride.”

After a slew of concerns expressed during the public comment period, MTA board member Sarah Feinberg interrupted so the MTA could update the crowd on proposed Access-A-Ride improvements.

The MTA plans to better use technology to improve traditional Access-A-Ride trips starting later this year and into next year, said Alex Elegudin, MTA’s senior advisor for system-wide accessibility. As for enhanced broker service, the MTA will add more drivers in coming months and is reconsidering how shared rides are offered, so there’s less deviation from a route. Finally, the MTA is looking at “innovative rescue approaches,” according to Elegudin, for no-show cars, as well as ways to notify riders about trip information faster. Plus, the popular “on-demand e-hail” pilot, only available to 1,200 users, was already extended through the end of the year.

MTA board member Veronica Vanterpool noted the MTA’s paratransit task force “has not met in awhile.” She called on other board members to join the task force so the board could reinvigorate its focus around paratransit.

The glaring challenge ahead is one of funding and sustainability — the paratransit pilots have proven so popular they’ve run a high tab for the MTA.

Paratransit service contracts are the biggest non-labor line item in the city’s transit budget, costing over $450 million in 2018. That figure is expected to top $500 million within the next two years; the MTA draws in only around 40 percent of that through city reimbursements and fare revenue. The transit agency, now in a well-publicized funding crisis, has yet to reveal a plan to make new paratransit services sustainable.

The shift to enhanced broker service was one way to reduce costs, Rappaport believes. In the midst of such changes, Access-A-Ride users remain uncertain about what’s ahead for the service that allows them to travel through the city.

“The people carrying pillows today,” Rappaport says of protestors at the board meeting, “[are] really to illustrate the difficulty of getting around with this system.”