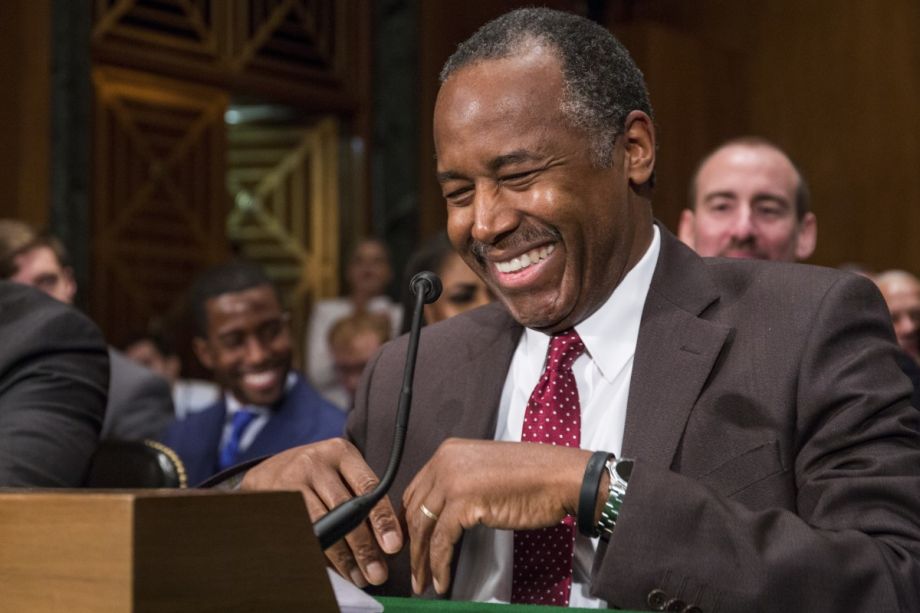 During the January confirmation hearing for new U.S. HUD Secretary Ben Carson, the government outsider with no experience in housing or urban development promised that, if confirmed, he would launch his tenure with a listening tour.

Instead of “just listening to the sage people of D.C.,” he told the Senate Banking, Housing and Urban Affairs Committee, “I want to hear from people with boots on the ground who are administering programs.”

That tour began in mid-March, with trips to Detroit and Miami, and will reportedly continue on to Dallas. How Carson chooses to conduct it — which programs he visits, which stakeholders he speaks to, whether the public is allowed to listen in — may prove revealing.

As The New York Times has reported, Carson’s view of public housing and federal anti-poverty initiatives in general has been deeply shaped by his own experience growing up poor. His mother espoused a strong belief that people could lift themselves out of poverty through hard work and education. Carson took that path, and so remains confident that others can do the same.

Now that he’s been appointed by President Donald Trump to head a federal department that will shape the fates of millions of low-income families, it’s an open question whether he will listen to other perspectives or allow his own experience — or lack thereof — to shape his policies.

So far, Carson’s tour has been largely shaped by ideology, and squarely within the secretary’s comfort zone. His first visit was positively Trumpian — to a public school named for Carson in his hometown of Detroit. According to the Detroit Free Press, he spoke to approximately 90 students and parents, taking about half a dozen questions before concluding the program.

He also spoke briefly to the press, during which he mostly evaded the question of whether he approved of a proposed $6 billion, 14 percent cut to HUD’s budget. Without offering specifics, he insisted that efficient, successful programs would remain. Asked what that meant for Detroit programs funded by Community Development Block Grants, which could be eliminated, Carson hedged.

“I think the programs that work extremely well will continue to be supported. We will find a way that they will be supported,” he said.

A few days later, Detroit Mayor Mike Duggan tweeted out a photo of Carson at the ribbon-cutting ceremony for Hartford Village, a new housing development for seniors by nonprofit, faith-based Presbyterian Villages of Michigan. Of the project’s 85 units, 20 percent are affordable and 80 percent market-rate. HUD funding comprises $12 million of the $17 million budget. Carson has repeatedly expressed support for partnerships between the government and faith-based or private groups.

The following week, he spoke at a church in Broward County, Florida, and praised a nearby Habitat for Humanity project in development as an example of how he wants HUD to operate.

“This project right here is one of the things that works because of public-private partnerships and how incredible they are at leveraging dollars,” he told the audience of local officials and housing advocates. “That’s how we become a success as a nation. The government can’t do everything, but the government can do things to get things started and then the private sector and faith community comes in and leverages that.”

But that project too depends upon Community Development Block Grants and other programs that would be slashed in Trump’s current budget plans. Housing advocates and elected leaders in Broward County, one of the country’s most unaffordable metro regions, said that such cuts would be devastating for an area where affordable housing is already out of reach for so many. As in Detroit, Carson told reporters not to despair — funding for housing would come from an as-yet-unspecified infrastructure budget, but he offered no specifics.

“Absolutely the right idea for [Carson] to listen,” Geevarghese says. “But I don’t know if he’s willing to hear broadly, and if he’s going to pick and choose his audiences. … If you’re not going to be willing to hear from residents or people on the ground who may not agree with you, if you want to sort your audience by virtue of who’s just going to stand up and applaud for me, I don’t think that’s engagement.”

Geevarghese says that what he calls the “signal to listen” was sent out early during President Barack Obama’s administration, but his experience at HUD during that era also illustrates the limits of listening.

“Some of us came from the outside, so our posture was one that we knew we needed to listen to folks on the ground,” says Geevarghese, who had been a senior associate at the Annie E. Casey Foundation. Given the ongoing economic and foreclosure crises at the time, there was both a sense of urgency and a desire to try things HUD had never tried before.

“There was a lot of gnashing teeth on what should be the government’s role in giving people relief on the ground, and what should be the level of investment,” he says. That led to conversations about interagency partnerships for community economic development, and retooling HUD to work at metro and regional scales, not just on individual projects.

“This was going to be new for HUD. We needed to be open and receptive to places that had worked in innovative and creative ways,” he says.

In mid-2009 Congress appropriated funds for HUD’s Sustainable Communities Initiative, which would coordinate federal investments in housing, transportation, water and other infrastructure. Despite the feverish climate of the times, the agency didn’t decide how to spend it behind closed doors. Instead HUD issued an advance notice on the funding that would become available, and Secretary Donovan launched a listening tour to ask local elected officials and community groups how the program could be most helpful to them. “We got bunches of feedback,” says Geevarghese, “much of which shaped the final program.”

But by the summer of 2010, with the Tea Party ascendant, a new narrative about the Sustainable Communities Initiative began to emerge. As he considers HUD policy going forward, Secretary Carson may want to think about Geevarghese’s telling of what happened next.

“It got a target sign placed on it by members of the Tea Party and the far right who thought, even though it was listening and ground up and lots of community engagement … thought this was Obama telling us where we need to live,” says Geevarghese.

By the time the first grants were awarded in October 2010, HUD was hearing from local and regional offices that Tea Party folks were showing up and shouting down meetings. “One thing we learned pretty quickly, at city hall … beyond the mayor and others who are used to electoral give and take, the planning department is not used to having to go to war,” he says. “HUD lost the narrative early, and by the time we started paying attention to it, the more extreme elements had already painted it as something that it definitely was not.”

The first people to recognize the sea change had been HUD’s field staff, but by the time their concerns reached the federal level, it was too late. Raabia Budhwani, who led the Strong Cities, Strong Communities team in HUD’s Macon, Georgia, office, during the Obama administration, says a listening tour represents an opportunity to elevate staff concerns.

“If in the field a [Field Policy and Management] employee has been working there for 5 to 10 years, has deep relationships with the community, and they understand something, they have to go through so many more layers to get that message conveyed and it’s probably lost in the game of telephone,” she says. If Carson’s eyes and ears are open to what field staff tell him, he can make changes far more quickly — but he could also propose quick fixes that don’t get to the core of the problem.

“If your political leadership don’t understand the bigger picture or the nuances of what’s happening in a community, they may hear one thing and act on it, and that might just be a Band-Aid and not an actual sustainable solution,” says Budhwani.

Long-term, she suggests HUD could use a more efficient listening infrastructure, to ensure the secretary doesn’t need to go on a cross-country tour for good local ideas to percolate up to the federal level. Maybe, just maybe, such an approach could cut through some of the political grandstanding — and allow Carson to engage in some of the streamlining he has talked about, without sacrificing programs that work.

“I suspect that a lot of work we did in the last administration, both the place-based way of working and [jobs support] will actually achieve the few goals that Carson has articulated for HUD,” says Budhwani. “He talked about how he doesn’t want to just give people housing. He actually wants them to empower people to get out of whatever situation they’re in. And that is the intent of the work we’ve been trying to do.”

So far, Geevarghese has been disheartened by an atmosphere of paranoia and guardedness that has enveloped HUD since Trump’s inauguration. (Despite multiple attempts to speak with a HUD representative about Carson’s listening tour plans, the department would not comment for this article.)

“We tried very hard in the [Obama] administration to lower the walls at HUD to make HUD a much more open, engaged, listening place,” he says. “It has not helped the agencies [in the Trump era] for there to be gag orders, to prevent talking to folks on the outside, much less other agencies. I’m hoping that, as secretary, Carson asks, ‘what is in the best interest of the country?’”

If he does so, and is ready to hear the answer, the listening tour could be considered a success.

“Listening comes at cost, and has trade-offs and it takes time and it takes patience,” says Geevarghese. “But I was glad to hear that he’ll be doing it, and I hope that he sees things that inform his frame.”